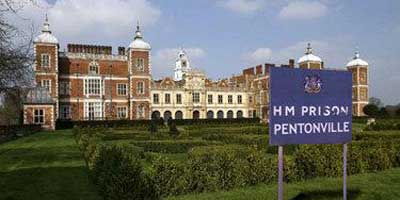 A series of events took place at HMP Pentonville in Caledonian Road, Holloway, organised by the White Ribbon Campaign – a group trying to raise awareness of domestic violence.

Convicts were given the opportunity to make posters and to talk with some Islington organisations who all work with victims of abuse.

Domestic violence is a huge problem in Islington, with almost 4,000 reported cases in 2012 costing the borough nearly £26million.

The posters involved inmates making handprints centred on the theme These Hands Are Not For Hurting – meant to symbolise that their hands will never commit violence towards women.

Chris Scard, a case manager at the prison, said: “Those taking part were also able to talk with local organisations who all work with people affected by domestic abuse, including the Islington Council Domestic Violence Strategy and Services department, Islington Children’s Service and the Iranian and Kurdish Women’s Rights Organisation.”

The prisoners were also encouraged to sign a pledge organised by the White Ribbon Campaign, to say they will never commit, condone or remain silent to violence against women. At the end of the week the pledge had 357 signatures.

The building futures team from HMP Pentonville. Photo: Islington GazetteMore than 300 inmates signed a pledge to stand against violence towards women after a week-long campaign in their prison.

Lauren Benham, an interventions worker, said: “I think the events have had many positive repercussions. I had many interesting conversations with prisoners which were very insightful.

"It also gave the guys an opportunity to talk with the members of the community and some excellent potential training opportunities have been opened up as a result of having those speakers in.

"There are guys still talking about it a week later and saying what a good campaign it was to have in the prison, so the reaction was really positive and continues to be.”