Forced Marriage & the Heart of Darkness 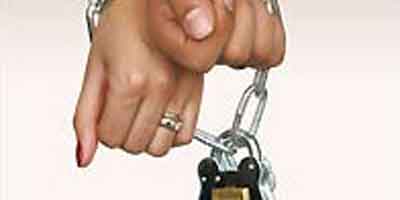 Article reproduced here with kind permission of the author - @Huma101

When I was first given my diagnosis of Borderline Personality Disorder on an August night two years ago, I felt a strange sense of relief. Finally, I had a language to understand the waves of emotional distress that were consuming me and, to those closest to me, the beginning of the inexplicably destructive behavior  The red strips across my arm and the hair I had chopped off in a frenzy of anger at myself.

At the time it seemed painfully ironic that the trigger was the experience of being with the loveliest and gentlest man I had ever known. I now realize that it was no coincidence that this journey of greater understanding would start with the experience of something as close to love, than I had ever encountered before. There is a juxtaposition of love unleashing the most painful emotions: that acute and terrifying fear of being abandoned. But the trigger situation had to reach the deepest part of me to unleash the flood of painful emotions.

There is a darkness that I have always kept at bay and when finally the dam burst, there were waves and waves of distress and a mental pain that crippled me. The darkness was well suppressed for years before the eruption. I tried to push it away – I worked hard, I mentored others, I was always out with friends, going on holidays, filling all my spare time. The darkness is a voice that tells me that I am “ugly” and “disgusting”. I know that voice intimately. In Islam we are taught that there are two angels, one on each shoulder telling you right from wrong, and sometimes I wonder if this voice is a substitute for those angels; it crushed me.

In therapeutic terms that voice is termed the ‘critical parent’. There is a dichotomy in accepting that my parents could be responsible for this voice. Who wants to think this of their parents? It is even less accepted in Islam where the door to paradise is through your parents. The voice weighs down on me to the point where I cannot bear the silence and I keep the chatter of Radio 4 as a constant background noise when I am alone in my room.

But of course I have always known whose voice it is: the same people that I fled from nine years ago after being forced to marry a man I did not know. My mother had told me that I was “lazy” and useless and had I “looked in the mirror” lately?

The wedding took place in India in front of 500 people, the vast majority of whom I did not know and on a day which remains a blurry haze. To this day I rack my brain for the minutiae but there is nothing. I cannot remember what I ate, or how I got to the wedding venue; apparently there are photographs of the day somewhere in the ether and even a video, I don’t have any memory of this. It’s what my therapist has called ‘splitting’. Shutting down from the horror has enabled me to survive but suppressing those memories means that I have never processed the abuse inflicted on me and I constantly recycle those feelings, like running away from those that care for me the most because the feeling of being abandoned and love being taken away is an intolerable fear.

I remember the rest though. When we returned to my home in London, I slept on the floor because I could not bear sleeping next to this stranger; feeling suffocated because I was living with a man I could not bear to speak to and whose smell clung to everything in the room. I could feel myself being smothered in the days before I left and I did not know who I was as I had nothing that felt mine any longer: my space, my life, my feelings and intellect were being eroded. It felt like the death of my soul and spirit and I fled with a flimsy plastic bag of clothes.

A GP said recently I had Post Traumatic Stress Disorder but I think the borderline was triggered by something a lot more complex and ingrained. If your parents believe it is morally acceptable to force you to marry someone that you have explicitly objected to time and time again, what system of values legitimises this? Such a system does not develop overnight. This system has made the individual subservient to the family’s honour and the lack of sympathy and care permeated my life long before the forced marriage.

There was never any hope for that relationship with the lovely man I went out with all those months ago and sometimes I wonder if there is any hope for me. I try and do what I am supposed to: I see my therapist regularly, I try to manage my destructive compulsions, I learn about my illness like a student, I continue living my ‘other life’ where the darkness is well concealed, but sometimes I do wonder whether I can let go of my fear and have faith.

Huma is a feminist, writer and activist and is passionate about raising awareness about mental health and honour based violence, particularly forced marriage.

If you are in the UK and fear you may be the victim of a forced marriage, you may find the following resources and organisations helpful: