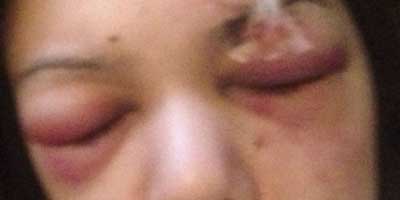 Gang beat up Birmingham mum with baseball bat as she bought nappies for her baby.

A new mum may lose her eyesight after being brutally battered with baseball bats as she went to buy nappies and milk for her baby girl.

The 19-year-old was dragged from her car’s passenger seat by a gang of at least seven thugs who rammed the Volkswagen Golf in a stolen Vauxhall Corsa.

She suffered a broken cheekbone and eye socket in the attack while her husband suffered a leg wound.

The thugs responsible fled in a third car as brave witnesses rushed to help the woman.

The victim was too scared to be named but allowed the Mail to print pictures of her injuries. And the teenager’s mother said her eyesight was the main concern:

“They went out to buy nappies and milk formula and we have no idea why this happened.

“The doctors said there was no brain damage but it is too early to know how much damage has been caused by the break and the big concern now is for her eyesight.

“I do not even want to think about what might have happened if my granddaughter had been in the car with them.

“These people did not care.”

Police said they could find no motive for the couple’s ordeal.

It happened in Maybank, Bordesley Green, at 8.30pm on January 8 as they drove to buy milk and nappies for their three-month-old daughter.

“I am very grateful to the people who live nearby who brought her inside. She fainted on somebody’s staircase and there was blood everywhere.

“I want the people who did this brought to justice. My concern is that they will go an do this to somebody else. Somebody must know something.

“It makes no sense at all. We have no idea who they were or why they did this."

“Police received a number of calls about the incident.

“The victim’s silver Golf was involved in a collision with a Vauxhall Corsa.

“A number of men from the Corsa and a third unidentified car approached the Golf carrying weapons including baseball bats and sticks.

“They smashed the passenger window and attacked the female passenger and the driver. The passenger suffered a fractured left cheek bone and was dragged from the vehicle.

“The men were picked up in the third car, which escaped the scene. The Corsa is being forensically examined and had been reported stolen prior to the incident. No motive for the attack has been established at this stage.”