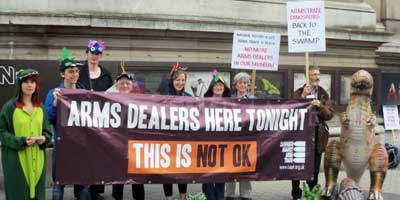 On the 2nd of July 2012, the United Nations convened in New York for a summit to discuss the ever more pressing need for an Arms Trade Treaty (ATT).

Over the course of the coming weeks, leading to the close of the conference on the 27th of July, the nature of the proposed treaty will be discussed and hopefully, signed into action, providing strong guidelines regulating the export of arms across the globe.

Weapons manufacture and export stands as one of the most profitable businesses around, forming a $60 billion industry in the USA alone.

However, many criticise the trade for supplying weapons to severe conflicts in developing nations, such as the DRC and Syria. As a result, the need for the UN Conference on the Arms Trade Treaty to go smoothly, and to reach a unilateral agreement on the regulation of the Arms Trade has never been more pressing.

This treaty also looks set to put an increased impetus on protecting women and children, who are often the most vulnerable to the consequences of the unregulated sale of weapons.

It is important to note that the proposed arms trade treaty is not going to limit legitimate arms trade. Its intention is to ensure that those most susceptible to armed violence are protected, and those orchestrating the atrocities cannot so easily obtain weaponry. Each sovereign UN state that was part of the agreement, would still maintain control over their arms industry, but would be legally required by international law to ensure their exports met the criteria agreed in the ATT.

How the UN intends to enforce this treaty is as of yet unclear, but the UK foreign office claims the best way would be through the introduction of legislation at a national level.

UK One of the ‘Big Six’ Arms Traders

Representatives from the UK government will be in attendance at the conference, and has been listed as one of the ‘big six’ arms trading nations in the UN, alongside China, Russia, France, Germany, and the USA (by far the largest exporter of the six).

For the UK, the arms trade makes up a major part of its economy, with the income from military exports to the Middle East alone, generating £395 million in 2010.

However, despite these enormous profits, the UK government - and the arms trade in general, appear to be strong supporters of the proposed Arms Trade Treaty.

In 2011, the UN published a ‘non-treaty’ on the arms trade, and as a result was able to compile a list of every nation’s opinions on the proposed treaty. In this document the UK’s reaction has been very receptive to regulation of the arms trade. The document states:

‘The United Kingdom looks forward to working with the Chair and other States in the period up to and at the diplomatic convention in order to produce a comprehensive, robust treaty that strengthens international law, regulates and facilitates the legitimate trade in conventional arms and prevents the diversion of conventional arms into the illicit market, thereby delivering a significant positive humanitarian benefit.’

In addition to this promising sentiment, the UK also wishes to see a greater emphasis placed on human rights within the treaty. The government has also stressed the importance of putting an ATT into force as quickly as possible, with only the minimum 40 signatory states required to get the treaty passed into UN legislation.

On a national level, political support for an Arms Trade Treaty is extremely strong, with all three major political parties calling for a robust treaty. Prime Minister David Cameron released an official statement expressing a desire to see the treaty passed after the conference in July, with increased provision given to human rights and sustainable development issues.

Some have criticised the UK for what could be viewed as hypocritical support for an ATT treaty, given its own heavy involvement in the manufacture and sale of weapons. Much of the protest has been focused on events linked to, or for the arms trade.

The reception for Farnborough International (a group specialising in facilitating the trade of arms) will be hosted at the Natural History Museum in London.

This event, which runs from July 9-15, 2012, sees the world’s top ten arms dealers descend upon London along with Rosoboronexport, a nationalised Russian Arms manufacturer, which is currently the main supplier to the Assad regime in Syria.

However, London’s involvement with the arms trade goes much deeper than this one trade show. A London group of arms exporters was recently given rights to sell armoured 4-wheeld vehicles to the Syrian government, despite the human rights atrocities currently under way there.

Even the 2012 Olympics – no doubt the biggest event in London this year, is playing host to the arms trade in some way.

Photo: BAE Systems websiteBAE Systems is one of the key Olympic sponsors, and specialises in the production of the hotly debated UAV drones, and other weapons related research and development. This kind of flagrantly open support for the British arms industry, does raise some questions about the efficacy of Britain’s discussion of an international ATT.

With a defence budget of £43.6 billion and regular sales of armaments –  such as the recent £500 million Norwegian purchase of British made tanks, it is clear that the UK is heavily embezzled in the arms trade.

Despite the importance of the arms trade to the UK economy, the controls which would be placed on the industry have been openly welcomed by both the government, and British arms exporters.

What is interesting is the British stance on the treaty's approach to women.

A UK representative speaking about the proposition of an ATT treaty claims, “the UK supports the view that any assistance provided under the auspices of this treaty, should take account of the specific impact of armed conflict on women”.

Despite this promising statement, when the countries attending the UN conference in New York are categorised, based on the levels of support given to the restriction of the arms trade to areas where weapons are likely to be used against women or in gendered violence, the UK comes a paltry 59th of 66 responding states.

This status puts the UK's recognition of the importance of protecting women through the ATT below Zimbabwe, Lithuania, and Somalia.

There is huge popular support for the ATT, much of which stems from the fact that the money being spent on weapons could be put to much better use.

It is obvious that the need for national defence is very real, but the sums of money involved are excessive.

In some of the poorest countries in the world, money that could be going to funding improvements to agriculture, education and health services is instead being spent on weaponry.

The UK cannot be viewed as an exception. Its defence budget is the 4th largest in the world, and with the recent government cuts and austerity measures, key areas of the UK’s infrastructure and charitable organisations are going under-funded.

The money spent on defence and arms could instead be used to support women’s groups, or other community projects. 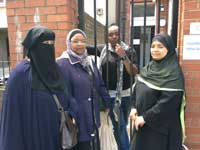 One of the many vital women services to face closure and eviction is Lambeth Women’s Project, a grassroots women’s support centre and meeting place for vulnerable women in London. Members are resorting to protest, and are currently occupying the building in an attempt to save the project, which provides a life-line for many, especially for minority ethnic women.

Women's Aid UK predicted that over 70,000 women may not have access to support and services after April 2011.

A recent survey conducted by Women’s Aid shows that 230 women were turned away due to lack of space by the organisation on an average day last year. Approximately 9 percent of those women had sought refuge.

Overall, the UK’s attitude to the UN’s proposed Arms Trade Treaty is extremely promising. In addition to this, the vast majority of countries in attendance of the conference being held in New York, have expressed strong support.

A robust ATT should hopefully also help to protect women and children. They are the most vulnerable to armed violence.

What the exact parameters of the final treaty are going to be is as of yet unclear, but increased controls on the export of weapons will doubtlessly prove beneficial to sustainable development – and international cohesion.