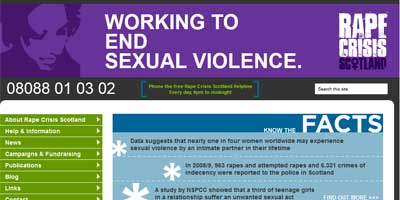 Online pornography is fuelling a rise in young Scots committing violent sex offences after an "alarming" increase in the crimes was revealed, campaigners claim.

Sex crimes reported to police north of the Border rose by 10%. Rape and attempted rape were up by 13% and the number of other sexual offences soared by 48%.

The disturbing trend was highlighted by the publication of Scottish Government figures collated from Scotland's eight police forces.

Although recent legislation may have affected the number of sex crimes and how they are classified, Rape Crisis Scotland said the rise, from 6696 in 2010/11 to 7359 in 2011/12, was still alarming.

Gillian Wade, head of the National Sexual Crimes Unit, said: "There has certainly been a rise in the number of young people involved in sexual offending and part of that is because of the unlimited access to the internet and social networking sites.

"Young boys in particular get girls to send them pictures through these sites and then send back images of themselves. Young people can end up being prosecuted for that and, of course, for under-age sex.

"Parents need to be aware this can affect all young people from all walks of life, across all classes. It's no good to sit back and think that your child isn't involved."

Linda Thompson, a development officer with the Glasgow-based Women's Support Project – which raises awareness of male violence against females – also warned that pornography is becoming a major form of misplaced sex education for young people.

"We need to start working with young people to teach them about relationships, respect and how to draw boundaries, as well as what the law actually is."

Figures show that 113 under-21s were prosecuted for sex crimes in 2010-11, although many others could have been referred to the children's reporter.

The High Court in Edinburgh heard recently a 12-year-old boy raped a nine-year-old girl because he wanted "to feel grown up" after viewing graphic sex on the internet in a case described as the "tip of the iceberg".

Sandy Brindley, Rape Crisis Scotland's national co-ordinator, told The Herald: "There seems to be more young people committing sexual offences and this could be linked to the accessibility of extreme pornography.

"Most parents would be horrified if they knew what their children are accessing free-of-charge at the touch of a button. More needs to be done with young people to teach them what a healthy relationship is."

In comparison, the statistics showed that violent crimes fell 17% to 9533, while weapon-handling offences dropped 10% to hit an 18-year low.

Seven of the country's eight police forces recorded less crime, while the national clear-up rate remained in line with the last three years' level of 49%.

Justice Secretary Kenny MacAskill said: "This is the fifth year in a row where recorded crime has fallen – to a 37-year low – and with police numbers remaining well above our pledge to put 1000 extra officers on our streets.

"I am particularly pleased to see a 10% reduction in crimes involving handling an offensive weapon, an area where we've seen crimes fall by 44% since 2006/7.

"We take the safety of our communities very seriously, and we will continue to support the outstanding work of our police, prosecutors and courts to bring those responsible for crime to justice."

He said: "I'm pleased that they're going in the right direction, but we still have too many murders and too many assaults so there is still a long way to go.

"I don't want anybody taking their foot off the gas."

The Women's Support Project is a feminist voluntary organisation, recognised as a Scottish Charity. The Project is based in Glasgow and works across Scotland.

Main areas of work are:  support for women whose children have been sexually abused or exploited; raising awareness of the harmful impact of commercial sexual exploitation and highlighting male demand as the root cause; improving service responses to violence against women including delivery of training; public education.

Rape Crisis Scotland provides a national rape crisis helpline and email support for anyone affected by sexual violence, no matter when or how it happened. The helpline is open from 6pm to midnight, 7 days a week, and offers free and confidential initial and crisis support and information. The helpline can also put you in touch with local rape crisis centres or other services for ongoing support. The helpline offers a mincom service for deaf or hard of hearing people, and can arrange for language interpreters if your first language is not English.