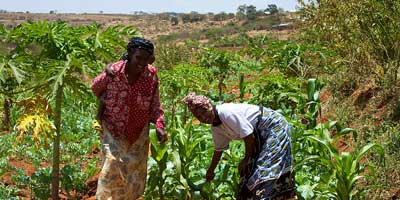 £4m Scottish Aid for African Farmers at Risk from Climate Change, Announced Ahead of Rio+20

Farmers in Africa whose crops are at risk from climate change will be supported by £4 million in aid from Scotland.

The funds were announced by Environment Minister Stewart Stevenson before he attends the UN summit on sustainable development in Rio de Janeiro, Brazil next week.

He said: "Scotland is well aware of its responsibilities to the wider world and we know that it is some of the world's most vulnerable people in sub-Saharan Africa that are dealing with the harsh realities of climate change.

"I am delighted to announce this latest support from the International Development Fund ahead of the UN Summit as a sign of our commitment to helping alleviate poverty in the developing world and to empowering vulnerable communities to deal with effects of climate change."

The funds will support Scotland-based aid organisations working in Zambia, Tanzania and Rwanda.

Oxfam will co-ordinate a food security project for Tanzanian farmers. Relief charity Tearfund will work with communities in Rwanda on food security, water and sanitation, and climate change mitigation. In Zambia, the Scottish Catholic International Aid Fund (Sciaf) is involved in a programme to support small-scale farmers.

Ralph Roothaert, of Oxfam, said: "This Scottish Government funding will help women and men small-holder producers to build those skills and, together with others, negotiate for better policies and practices for access to land and water, agricultural production and trade.

"It will make farmers more resilient to the effects of climate change by introducing drought tolerant rice varieties."

Lorraine Currie, of Sciaf, said: "As world leaders gather in Rio to discuss a sustainable future for our planet, this announcement is a practical example of how we can make a difference here and now. Over 1,300 small farmers will be supported through the funding, and many thousands more in their families and communities will feel the benefits."

The Scottish Government International Development Fund increased to £9 million in 2010-11.