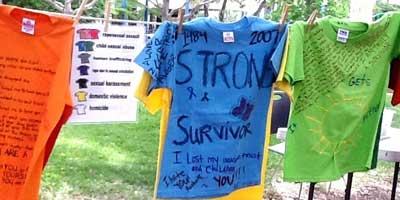 Teeshirts on a clothesline bring home the reality of violence against women through the Clothesline Project at California State University (U.S.) April 2012.
Image: Elahe Amani

(WNN) Los Angeles, CALIFORNIA: Sexual assault is one of the most detrimental types of violence against women.  Even in the societies where women’s advances and more protective rights are in place, sexual assault is still considered a crime that is most often not fully reported. The burden of violence is exceptionally placed on the victim.  That is the reason behind the fact that the number of reported sexual assaults have remained considerably less compared to other crimes, even in the United States.  This vicious dynamic continues because of deep rooted patriarchal values. A victim of violence is often ostracized and re-victimized over and over again. Either by judicial systems or regressive cultural norms where victims are often made to feel as though they are the ones who have ‘done something wrong to trigger the violence.’

In many societies, particularly ones with regressive interpretation of religious laws, rites and rituals are more prominent, women often have to choose between a life in hiding, in the shadow of shame and guilt, or by endangering their personal safety to come up front, ‘go public’ and share their narrative of abuse, assault, rape and incest publically as they seek help and support.

TAKE BACK THE NIGHT

It was in the late 1970s in England that a group of women embarked on the project called “Take Back the Night.” It was organized in response to the violence that was being experienced by young women while they walked through city streets after sundown. At the beginning the protests were organized and participated only by women with a goal of sharing information about sexual assault. By the 1980s, these sexual-assault-awareness-activities expanded to include more on the diverse issues surrounding violence against women.

As violence perpetuated against women was explored, it took a long time for the movement to address the rights of men who experienced violence. This very small group of men began participating and raising awareness about the violence they were experiencing. Today with the relative openness about the relationships, including LGBTQ communities, and the research and data about the incidences of physical, verbal, emotional and sexual assault with violence, it is more than ever accepted that the cycle of violence and abuse is about power and control.

As the issues of violence against women came from the margin to the center of the agenda, October was designated as ‘Violence Against Women Awareness Month.’  However it was not till late in the 1980s that the community of advocates and educators realized that most of the awareness in October is focused on family violence. Sexual assault and abuse was not receiving the attention and awareness that this social issue deserves.

In the late 1980s, the National Coalition Against Sexual Assault began developing interest in selecting a designated time period to promote awareness. An informal network of sexual assault coalition agencies revealed that April would be a suitable month, and the national Sexual Assault Awareness Week was established.

It wasn’t until the late 1990s that this week was expanded to an entire month. In April of 2001, Sexual Assault Awareness Month was celebrated for the first time.

The continued goal of this month is to build safe, healthy and respectful relationships.

There are many types of SV. Not all include physical contact. Sometimes it includes sexual harassment, threats and/or peeping between the victim and the perpetrator (person who harms someone else). Other SV can include unwanted touching, incest and rape, including rape within a marriage.

At a follow up to the Fourth World Beijing Conference on Women – ‘Beijing Plus 5’ at the United Nations in New York – rape within marriage was discussed and recognized as a form of sexual assault. Date-rape is also an area of concern for many safety advocates, gender activists and educators.

UNDERSTANDING THE MAGNITUDE OF SEXUAL VIOLENCE

The National Intimate Partner and Sexual Violence Survey (NISVS), is one of the Center for Disease Control?s latest public health surveillance systems. It has been designed to describe and monitor the magnitude of sexual violence, stalking and intimate partner violence victimization in the United States. In 2010, NISVS provided data on several types of violence that had not previously been measured in a national population-based survey previously.

About the author:
Elahe Amani is a women and human rights activist. She is the Chair of the Global Circles of the Women’s Intercultural Network.