From Tragic Loss to Global Campaigner for Arms Control 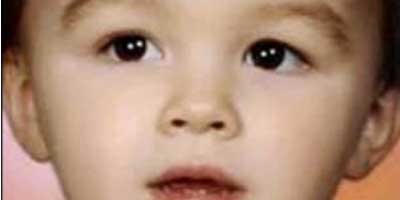 In July 2003, 2 ½ year old toddler Alistair Grimason, was hit by a stray bullet while lying asleep in his pushchair. He was on holiday with his family in Turkey.

In July 2003, an argument broke out between two men in a small seaside café in the region of Foca, Turkey.

A man drew a gun and opened fire, injuring several people within the café and killing two of them.

One of the dead was 2 ½ year old toddler Alistair Grimason, who was caught by a stray bullet while lying asleep in his pushchair.

Since Alistair’s death, his father David has relentlessly campaigned for the tightening of gun laws across the globe:

“My son was killed by a random shooting, and that was just on a family holiday,” says Mr Grimason. “After that, I realized that there was a campaign to tackle the global problem with guns, so I got involved.” 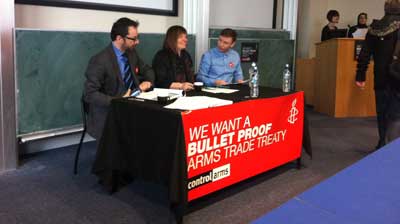 As week-long preliminary UN negotiations into arms regulation begin in New York, Amnesty International have launched the Arms Treaty Campaign to ensure that a robust, strictly regulated arms trade treaty is agreed in 2012.

“There are no global controls on the arms trade, so a lot of guns are making their way into countries where they are being used for human rights abuses and violations of humanitarian law,” said Mr Grimason at today’s Amnesty launch at Glasgow University.

“People are living in misery and poverty because of it, so it’s important that in July 2012 we manage to get a proper, comprehensive treaty to make the world a safer place.”

Establishing an international arms treaty would not only limit the availability of guns to civilians, such as Alistair Grimason’s killer, but would prevent the sale of weapons to countries who are likely to use them to violate citizens’ rights.

Current statistics relating to gun violence are staggering. In excess of 1,500 people die each day through armed violence and two out of three of these people live in countries which are not at war. Every year, 14 billion bullets are produced around the globe – two bullets for every human being on the planet.

Most of us will be fortunate enough not to lose our lives or our loved ones to these bullets, but thousands of others are not as lucky. In developing countries, the presence of arms can plunge communities further into poverty, whilst perpetuating problems of corruption, sexual violence and murder.

“There is a particularly devastating impact on the lives of women. Women are being raped, their children and husbands are being killed and their livelihoods are disappearing in front of them.”

A common theme running through the speeches delivered at the campaign launch was the effect that weapons have on the lives of innocent women and children.

Rape and other acts of sexual violence are prevalent in areas in which people have access to weapons, and Amnesty reports that at least 15,700 women and girls in Rwanda and 25,000 in Croatia and Bosnia reported being raped during times of armed conflict. Children are also forced into slavery under threat of violence or are forced to use weapons themselves.

“We see daily the people who have fled conflict and violent situations who are seeking sanctuary in Scotland,” says Gary Christie, Head of Policy and Communications at the Scottish Refugee Council. “Women are often subjected to rape and torture at gunpoint in countries such as the Congo and Sudan. It’s widespread and we can see the impact directly on the women who are arriving in Glasgow.”

A study conducted by the Scottish Refugee Council found that one in two female refugees arriving in Glasgow had faced sexual or physical violence at the hands of someone who was not their partner, with one in five of these women reporting that they wanted to take their own lives.

A generation wiped out by gun-violence

When David Grimason visited Turkana, Northern Kenya, he was shocked to witness a generation of people being systematically wiped out by gun violence.

After speaking to various tribes within the region, he was informed of raids being performed on villages in which thieves stole livestock and ‘indiscriminately killed women, children and anyone who got in their way.’ This led to displacement and an atmosphere of tension and fear. In this drought-plagued region, the presence of guns worsens an already traumatic living situation.

“It was very dangerous for women to be on their own, there was a lot of rape, abuse and violence towards women,” says David. “We were told that when people needed to go to the watering holes, they would send the women rather than men because the men were more likely to be killed but the women were more likely to get raped. That seemed to be ‘the better’ of the two, but I don’t think the women had much choice.” 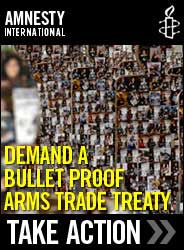 So what can be done to prevent this violence, rape and reign of terror from continuing in countries across the world? A bulletproof international arms treaty, the same concept being discussed in the UN this week. One might assume that due to the horrific problems and human rights violations forced upon innocent people, all countries would be in support of the arms treaty. This is sadly not the case.

Despite many countries supporting the idea, some wish to alter the agreement to suit their own needs.  Since the UK pledged its support for an Arms Trade Treaty in 2004, 153 governments have voted at the UN to initiate discussion on the international regulation of arms.

However, some countries remain skeptical and several wish to alter the treaty to suit their own needs.

The United States rejected the idea of an arms treaty three times in the past, but eventually agreed to negotiate in 2009 under the current administration.  Although they have now agreed to discuss the treaty, they would like to dilute it so that participating countries should only have to ‘take into account’ substantial risk of human rights violations when trading with others.

This would make trade with high risk destinations optional and would not prevent the sale of weapons to corrupt nations. The US would also like to exclude the sale of bullets from the treaty. They are not alone in their wish to weaken the strength of the agreement, as other countries such as Pakistan, India and China would like to exclude small arms such as machine guns from the treaty.

This year the UN will hold the final Treaty negotiating conference in July at their New York Headquarters. It will be the world’s one true chance at establishing an unshakable arms trade treaty that will prevent the human rights violations and atrocities outlined above.

Amnesty are calling on all British citizens to write to UK party leaders to ask that the United Kingdom advocate the strongest possible arms trade treaty.

If successful, it will prevent fathers from losing their sons, as David Grimason did. It will help empower women living in rural Africa and allow them to walk to the well without fear of rape or murder.

It will help stem the flow of refugees fleeing from persecution and abuse in their native lands. It will change the world for the better.

“I got involved in 2004, and here we are – 8 years later it’s coming to a conclusion,” says David Grimason.

“We will have a treaty, but we need to have the proper treaty. The treaty must include all weapons and ammunitions and be enforced properly, and have human rights at the heart of it.”