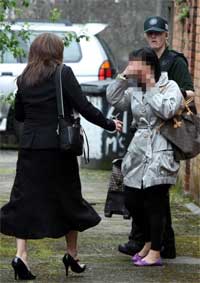 A woman, centre, is led away by police after they raided a house on the Lisburn Road in south Belfast during an operation linked to human trafficking in May 2009.

Ulster is proud of its historic record of barring slave ships from its ports. But today every town in the province stands accused of complicity in the sexual exploitation of vulnerable foreign women and children. Philip Bradfield reports.

Human trafficking survivors who have escaped their tormentors in Northern Ireland have spoken out about their “degrading and humiliating” ordeal for the first time.

Lost her parents as a young girl

A Chinese woman said she ended up in the UK after losing her parents as a young girl and being sold on to traffickers in the UK for prostitution.

Her troubles started when her father was killed and her mother went into a mental institution due to the stress.

“I was given to a man who took me to a city in China and promised to give me a job,” she said.

“I was apprehensive and very depressed because of the loss of my parents.

Shortly after arriving in this city, this man raped me.

“I was shocked and felt very frightened. I had nobody to turn to and was too scared to go to the police. I was only 14.

“I soon learned that not only did I have to work in this man’s shop, but I had to perform sexual favours for him and his many friends.”

A captor negotiated a “lucrative job” for her as a prostitute in the UK but she finally escaped the net in Belfast (her full story follows below).

The News Letter can reveal that consultation is ongoing about a major crackdown on men who use vulnerable foreign national women in Northern Ireland for sexual gratification.

The news comes as the News Letter gives what is thought to be the first ever personal testimonies from two foreign national women who escaped the evil trade here. One was trafficked into child prostitution from China and ended up in Belfast, while another found herself in domestic servitude after being trafficked from Bosnia (see testimonies below).

A recent BBC investigation estimated that up to £500,000 is spent on prostitution in Northern Ireland each week. Amnesty International said victims need much more protection if they are to feel confident enough to testify in court against the traffickers – none of whom have yet been convicted in Northern Ireland.

But detective inspector Dougie Grant, of the PSNI Organised Crime Branch, told the News Letter that new legislation is coming into force which will put men who use such women in the dock.

“Traditionally, it has been the women who often carry the can in the courts for prostitution, but the UK’s Policing and Crime Act 2009 is already in place which will put the onus on men who purchase sex to determine whether the woman they are using are operating under duress, ” he said.

“It is not yet known exactly when this will be implemented but it has been found to make dramatic inroads into the sexual demand for trafficked women in Sweden. When it is implemented punters may argue ‘how was I to know the woman was acting under duress’, but under this law it is an offence to buy sex from a victim of human trafficking or a woman who is prostituting herself under the control of someone else.

“There is consultation ongoing between PPS and PSNI through the Organised Crime Task Force on the implementation and enforcement of this legislation, ” Mr Grant said. “This may involve media campaigns in conjunction with enforcement and prosecution.”

Mr Grant said children from poor countries are coming to Northern Ireland with hopes of new lives but being forced into prostitution in brothels across the province.

“To gain the co-operation of victims is very difficult, ” Mr Grant said.

“A lot of decisions to come to Northern Ireland are made on the promises of an amazing new life overseas and it is only when they arrive that it is clear what is going to happen to them.

“Young women are being bought and sold in Northern Ireland for between a few thousand and tens of thousands of pounds – one woman can earn £1,000 a day for their crime group. They are often subdued through violence and rape.”

The three main areas which victims come from are Africa, eastern Europe and south-east Asia and they are predominantly female.

Mr Grant added: “Traffickers target vulnerable people from backgrounds where there is poor support for girls and young women, poverty and debt.”

Every year in Northern Ireland he is aware of three or four girls under the age of 18 who are caught in this trap. Many are from other age brackets.

“In one example police searched a suspected brothel and there was one young woman who was particularly quiet and withdrawn. The young girl was vulnerable and was being exploited. She had been prostituted in a number of brothels and when she had an opportunity, away from the other women, she asked us to help her.

“She is now healthy and with the help of support networks has rebuilt her life although her fears are not gone, just managed.”

Prostitution is the main type of exploitation in Northern Ireland, and the traditional means of women operating on the streets is giving way to brothels operating off-street in flats and residential homes.

He is aware of 88 brothels in Northern Ireland, the majority of which are in greater Belfast, though they are also operating in towns and cities across the province. Ninty per cent of advertising for prostitution is now on the internet, and thousands are logging on to the websites every day.

Mr Grant added: “Our investigations aim to identify crime groups from across the UK working in Northern Ireland, both British nationals and foreign nationals are involved. They see Northern Ireland as a market but prosecutions are very difficult as so few victims are willing to testify.”

“Women do not enter prostitution as a career. They enter through vulnerable situations in their life. Prostitutes we are looking at are having sex with 10 to 12 men a day.

“Men who use such women need to ask themselves – are they doing the right thing?”

Orphan is forced into child prostitution

“I WAS the only child in my family and I remembered a very happy childhood. My father was then killed in a bad accident during his employment. My mother and I had no source of income after this accident. We were both devastated.

Promise of a new life turns to misery

“I LIVED in a small village in Bosnia with my mother and my two sisters. I am the eldest daughter. My family is very poor – there is very little work in Bosnia.

WHAT YOU CAN DO

The PSNI says there are brothels in “nearly every town” in Northern Ireland and in all types of rural and urban settings. But ordinary residents can help police build up intelligence on the locations of such women.

Inspector Dougie Grant says the giveaway signs for brothels in all rural or urban communities are:

If you see such signs in your neighbourhood Insp Grant requests that you report it to the PSNI on 0845 600 8000.

Alternatively information can be given anonymously via Crimestoppers on 0800 555 111.

The News Letter suggests that this list of giveaway signs and the PSNI contact number can be printed out and kept for handy reference.

For more information on trafficking log on to www.blueblindfold