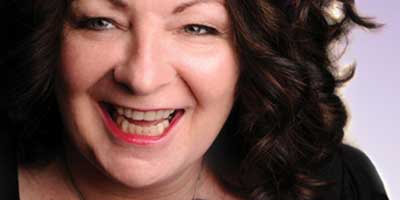 "Why I support Safe World for Women"

Janey Godley is a multi-award-winning Scottish comedienne, playwright, award-winning blogger, best-selling author and former Scotsman newspaper columnist Janey Godley has performed her comedy shows and one-woman play around the world, including off-Broadway in New York. She is a regular on BBC Radio 4's Just a Minute.

The fair haired woman at the bus stop cried loudly and turned away as her male friend shouted into her face.

He then slapped her loudly across the head with a plastic bag which I assumed must have concealed a bottle, for the crack that she suffered made my teeth grind and crush as I heard the impact.

He stood there, his bald head red with anger, his other fist trembling in rage and his face contorted into that of a snarling bull dog. The blonde woman simply moaned and bent over holding her head after the bottle made contact with her scalp.

“Leave her alone you crazy freak!” I screamed and stepped between him and the moaning simpering woman.

“Don’t say anything.” - The woman lifted her dazed face towards me, pleading with her frightened eyes. I knew exactly what she was conveying with her eyes.

“If you upset him, I get it more” is what she was saying. “If you stand up to him, he will beat me worse in private.”

Those feelings stirred up old memories within my furious brain. The baldy angry man spat at her and ran off leaving us both at the freezing cold bus stop. The woman refused any words of comfort and help. She jumped on a number 56 bus and I never saw her again.

I used to be her.

I got married too young to an even younger boy who never knew how to love without fear and violence. He came from a gangster background - a male dominated family, where women were undervalued and were never really respected. It took us both almost two decades of anger and abuse to work out our differences.

I was told men don’t change, but I would like to think some can and –DO. When my husband talks about how he behaved towards me, he is totally remorseful and has never tried to justify or hide anything he did. He actively encouraged me to write all the details of his marital abuse in my autobiography ‘Handstands in the Dark.’

He is still ashamed and can never understand why I stayed. I know I shouldn’t have stayed but, like many women, I had many reasons to hang on. None of them right reasons; more like excuses and lack of confidence mixed with no sense of self worth.

When my husband had tried to talk about his abuse towards me, no one wanted to deal with it. He knew instinctively that what he was doing was wrong and needed help to understand what was going on with the violence and his own mental health and recurring depression that he had suffered since he was 14 years old. Other people around us assured him that it was the norm. Society accepted it.

My own mother had been murdered by her boyfriend - Peter Greenshields - and he never even got questioned by the police, despite being the last person to see her alive and having been charged for assaulting her previously.

My husband recalls how, back in the early 80s, he tried to seek help from his family and the local priest about the way he had been beating and mentally abusing me, he was told “Men sometimes just can’t control themselves and it is hard when you first get married.”

This spurred him into seeking psychological help from the local health authorities, which became fruitless and left with him with no other avenue so he went for private therapy. This does not make him a ‘good man’ but it did make him a good husband who has never forgotten how he terrorised the love of his life.

He still struggles to understand what made him so unbelievably violent towards me. That is the reason I stay with him: if he had never tried to understand the anger, or take the responsibility for his actions, I could never have shared my life with him. We are now married 30 years and sometimes to this day, when he shouts, I get a knot in my stomach and cringe at my own vulnerability.

He will never hit or abuse me ever again, not because he has promised, but because I will never let it happen to me. It takes years to be strong inside after being abused by someone you love but you do manage it.

We have a beautiful 23-year-old daughter. It is hard watching her grow up. I worry she will be hurt or let someone rob her of all that shiny beautiful hopefulness she possesses. I can only try to teach her self worth, self confidence and her father has spoken to her about how he treated me. There are many testimonials my daughter can read about women who were attacked and beaten by their partners and all of those accounts are valid and important, but I think it was valuable for her to hear it from her father - how violent he was towards me – her mother.

My daughter was appalled at the level of brutality and emotional fear I had lived under from the man she loves the most in her world and him discussing it openly with her can only help her reach some understanding as to how to deal with such situations in her life. We hope.

My daughter, her father and I agreed that silence, shame, ignorance and acceptance are the some of most basic hurdles to get over when dealing with spousal abuse. The shame it brings on a woman to have to admit that the man she loves and chose to marry is the one person who is making her life a living hell is often the hardest thing to tell people. It was for me.

To this day, I hope that woman at the bus stop with the cracked head got on a bus and ran away from her violent man forever.

Or maybe like me, she waited and hoped her man would love her enough to stop hitting her only to realise that I had to love myself first.

The second you say you are involved in raising awareness about the violence women suffer, you can hear some people shut their minds off from you. Bleeding hearts and sad tales isn’t something people like hearing about.

The reason there is sympathy fatigue over this subject matter is that folk feel helpless to help and that can in turn be negative about the good work from the people at A Safe World for Women which is run by The Women for a Change International Foundation (WFAC) and is a not-for-profit organisation staffed by volunteers.

Basically the organisation are trying to get one million online endorsements to help raise awareness about the fear, violence, rape, abuse and mental torture suffered by women across the globe, they are also trying to highlight the horror of the female slave trafficking.

Please go to: A Safe World for Women and make your endorsement for a safer world for women, it’s free and it makes a difference.

I am a Scottish Stand up Comic, Actor, Journalist and Playwright. I am also a published Author of book: "Handstands in the Dark" my critically acclaimed memoir.

I work all over the world, either on tour with comedy or theatre. Follow my stories daily and catch up with my unique life.
I love writing my Blog and reading the comments posted, but I do not always have the time to reply or to chat, Thanks.