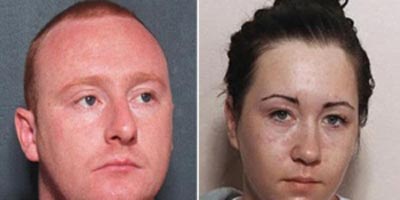 A man and his girlfriend have been jailed for a total of four years and 10 months in Scotland’s first human trafficking conviction.

Stephen Craig, 34, was jailed for three years and four months for arranging travel, accommodation and advertising for 14 women and men.

His co-accused, Sarah Beukan, 22, was jailed for a year and a half for her part in the human trafficking network operated by Craig.

The pair admitted moving 14 men and women to addresses in Glasgow, Edinburgh, Belfast, Cardiff and Newcastle.

And police involved in the inquiry said they had evidence of threats of terrifying violence which would have been heard if the charges had gone to trial.

The case was hailed by Lord Advocate Frank Mulholland as a “landmark” in the battle against the exploitation of vulnerable women.

Their gang – who moved women between brothels across Britain but placed them mainly in Glasgow and Belfast – are believed to have been pulling in at least £20,000 a week from the trade.

Property worth £2.35million – a large chunk of it owned by Craig – is now being targeted for seizure under proceeds of crime laws.

Vulnerable women trapped in a culture of fear

A source on Operation Factor, a joint inquiry by Strathclyde Police and the Police Service of Northern Ireland (PSNI), said last night many of the prostitutes involved were “vulnerable”.

Although they initially worked for Craig voluntarily, they became trapped in a culture of fear. The source said:

“Very early on when they started working, Beuken would make it known that Craig was a gangster and knew a lot of the main criminals in Glasgow.

“There’s no evidence of direct violence against the individuals in their statements but there is evidence of threats.

“On one particular occasion, one witness – a Scot – stopped working for Craig and went away to work independently again.

“He coerced that person to come back and work for him again, and when they did, he threatened to pour boiling water down their throat if they ever walked away again.”

The inquiry team raided a string of the gang’s brothels last year in Glasgow, Aberdeen and Belfast.

Detectives found prostitutes who were trafficked from Bolivia, Brazil and Nigeria alongside others from Scotland and Northern Ireland.

Among the women were two students who had become trapped in prostitution because they were desperate to pay off student loans. One, a young woman from Belfast, had been studying medicine at a top Scottish university.

Some of the prostitutes recruited by Craig were transvestites and pre-operative transgender men.

Craig targeted independent sex workers who advertised in newspapers and on websites, the inquiry source said.

He added: “He would tell them he had luxurious flats in Glasgow, Aberdeen and Belfast they could work from.

“It was all very nice during the initial meetings but, after a time when they had been working, more and more pressure would be put on them to take more clients, so he was taking more money.”

Some of the prostitutes interviewed told police they were taking as much as £5000 a week each, with a third going to Craig.

However, detectives found he had not declared any earnings for almost five years.

None of the brothel earnings were paid into his bank and police have been unable to trace where the bulk of the cash went.

Beuken, who started as a prostitute herself, was said to be besotted with married Craig.

He was still living with his wife in Clydebank while the probe unfolded.

Sex workers travelling between Belfast and Glasgow would be told to buy Thomas Cook cards.

They would walk into branches of the travel agent in Northern Ireland with thousands of pounds in brothel earnings.

This was paid on to the card – and unloaded by Craig and Beuken in Glasgow.

The tactic meant there was no risk of being stopped at a ferry terminal with a bundle of cash, which could be confiscated under proceeds of crime laws.

Operation Factor began in summer 2010 amid concern from politicians over a lack of human trafficking convictions.

The starting point for police came last June, when concerned neighbours reported a brothel was operating at a block of flats on Clyde Street, Glasgow.

Police raided the address and found evidence a brothel was operating, along with two prostitutes – one a Bolivian woman. She had been trafficked to Scotland via Spain, Dublin and London.

But Craig and Beuken’s involvement only began in the UK, when they recruited women for their business.

Belfast cops raided a brothel in July 2010 and prostitutes there told them it was run by a Stephen Craig, who also ran brothels in Scotland.

After the connection was made, more raids were carried out in Scotland and Northern Ireland.