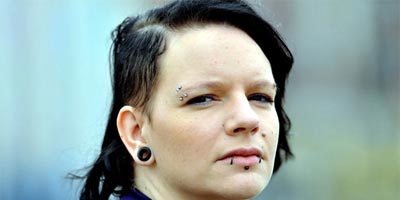 A new campaign is being launched highlighting the effects of domestic abuse on women in Wales.

Cathy Owen for the South West Echo, talks to one woman who has taken the brave decision to talk about her abuse in order to help others.

He would punch walls and doors and kick things

Mother-of-three Rebecca Jones was abused by her husband for more than eight years before she sought help.

It became so bad that she ended up in hospital after an attack while she was pregnant and had to move house several times after he threatened to kill her.

But Rebecca had no idea of how things would end when she first met him.

“I met my ex-husband when I was just 16 and had our first child just before my 17th birthday. We decided to get a house together and everything was okay for a while,” recalls Rebecca, 30.

“It started off with little signs of what was to come – he would punch walls and doors and kick things. But he soon moved away from kicking doors and started to push and shove me instead.

“At that time, we lived just down the road from my mum, but we then moved away to be closer to his family, and that’s when the abuse started to get worse. He would punch me in the face and kick me. It didn’t even stop when I became pregnant with my second child, a daughter.”

But despite the abuse, Rebecca agreed to marry him a year and a half later.

“He was full of promises, saying things would be better when I was his wife.”

The abuse remained constant and even though Rebecca threw him out a couple of times, she always let him come back to the house when he promised to be on his best behaviour.

“We had a son a couple of years later but, while I was pregnant, we had a huge argument and I ended up in hospital,” says Rebecca.

“I pressed charges against him and social services became involved. My two eldest children were put on the ‘at risk’ register and we were encouraged to take parenting courses.

“Things did start to get better after that and I eventually let him move back in.”

But it didn’t take long for him to go back to his old habits and start pushing and shoving Rebecca around.

Saying 'no' in the bedroom was not an option

“I soon learnt that saying ‘no’ in the bedroom wasn’t an option either,” she says.

“Our son was nine months old when I decided to get a plan together to leave.

He’d come home drunk again and I decided I couldn’t take any more and I would leave the next morning. I waited until the kids were in school and packed everything up.

I’d found the phone number for Women’s Aid on a sticker on a toilet door, so I called them and we were put in a refuge that day.”

Women’s Aid helped the family with housing and they were moved into a new place in the same town so there wouldn’t be too much upheaval for the children.

“He started to harass me and follow us around.

“The final straw came when he broke into our house while we were out.

He phoned the police from my landline and told them that he’d murdered me and our kids. I got home to find a riot van waiting outside my house.

He was arrested and I had to give evidence of everything that had happened to me in the past.

He was charged and sent to prison.

“I started to work with Women’s Aid and we were put on a housing waiting list in Barry, where my sister lived. It was at this point I got a call from my husband’s probation officer who said he was making threats to kill me when he got out of prison and that I had to move quickly.

“Women’s Aid moved us into a refuge again, before we found a house in Barry in 2006. We’ve been there ever since.

“He tried to track us down through his solicitors when he was released from prison, saying that he wanted contact with the children.

“We started supervised visits at a centre in Cardiff and this moved on to him having the children at weekends. However, when he realised he couldn’t get to me any more, the contact started to drop off.

“My eldest daughter was 13 then and she decided she didn’t want to visit him any more and he hasn’t shown any interest in seeing the other two since January.

“Women’s Aid Wales has helped me so much. It took me eight years to seek help but I’m so glad I did.

Now I have a new partner

“I’m now engaged to my new partner and we’ve celebrated our second anniversary. He has children from a previous relationship too, so we’re a happy family.

“He has a good job, we have a new house but, more than anything, he’s the most supportive, caring and encouraging person.

Rebecca has spoken out today for the launch of a new campaign against domestic abuse.

Live Fear Free is the latest campaign to be launched by Welsh Government as part of its ongoing Right to Be Safe agenda – a six-year integrated strategy for tackling all forms of violence against women.

The campaign’s website – www.livefearfree.org.uk – includes two videos, the first focusing on sexual violence against women, the second looking at the effects of domestic abuse on children, together with information on how to seek help.

Just over half of female homicide victims aged 16+ had been killed by their partner or former partner, in contrast to 5% of male victims