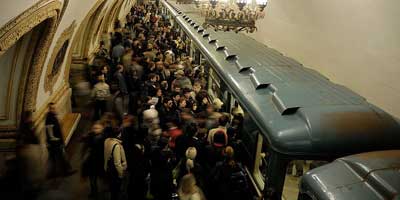 Recently the Thomson Reuters Foundation and the polling firm YouGov once again brought to light that some public transportation systems are seriously unsafe for women. Latin American capital cities topped that list, though even the “safest” of these systems — New York’s — has nothing to brag about because things like groping, lewd comments and sexual assaults are far from uncommon there.

The ranking was done after women in 16 of the world’s largest capitals — plus New York — were asked how safe they feel traveling on public transportation. Those polled were questioned on six topics, including traveling alone at night, risk of being verbally harassed by men, and risk of being groped or subjected to other forms of physical harassment. Respondents were left to decide what constituted "harassment" in their respective societies.

The least-safe cities were Bogota, Colombia, Mexico City and Lima, Peru — all in Latin America, where women “say they face daily threats on public transport ranging from lewd comments and groping to sexual assaults, with men rubbing up against them and taking photos up their skirts," Reuters reported.

Moscow was thought to be the least safe European capital for women, ranking ninth overall. In particular, the poll found that women in Moscow had little faith in other passengers to come to their assistance if they were being abused while traveling traveling on public transport.

Safe World for Women decided to go out and test these results by asking several women residing in Moscow about their experiences with the capital’s public transportation.

Many of the women surveyed listed discomfort rather than feeling unsafe as their primary concern with Moscow’s metro, although it is considered to be one of the most convenient forms of getting around due to the frequency of trains.

“The metro is fast and frequent, though it gets extremely crowded and uncomfortable during peak hours,” Natalia O. (34), a manager for a large multinational company shared. “Oftentimes it’s almost impossible to even get into the metro or make changes due to the large numbers of people.”

Adding to the discomfort of large crowds and rush hour was the attitude of some of the fellow passengers.

“Public transport is a huge gathering of strangers and it makes me feel highly uncomfortable,” explained Didar (21), a veterinary science student. “There have been several incidents, mostly in the metro, where old ladies demand having seats given up, people stepping all over your feet or shoving you. People are rude and I’ve witnessed an unpleasant incident when an elderly grandma tried to get in before the doors closed but only her arms and bag made it yet not one single man tried to help her by opening the slammed doors. After she eventually made it in some man began telling her off.”

In addition to rudeness and an overall lack of manners that women complain about, one of the respondents cited incidents of racism and most surprisingly of all, these come from other ethnic minorities. Darina (25), a freelance makeup artist and young mother went on to explain:

“A girl friend of mine is mixed race (Russian/African) and she uses the metro very often. She also often gets all kinds of racist remarks in her address and what is most surprising, these come from other ethnic minorities from the Northern Caucasus.”

Several respondents did say, however, that in the later hours there were times when they did not feel safe using the metro.

“I remember that when I did use to take the metro from work late at night I was frightened,” Darina noted. “Sometimes there would be drunk men staring at me and then start following me after I get out of the metro. Thefts also happen sometimes.”

Natalia (30), a prominent journalist, explained that despite all the craziness that goes on in the metro she still loves it because “it’s fast and convenient, plus it’s the most beautiful metro in the world in my opinion”. However, when going somewhere late at night a woman can “stumble upon indecency”. She can recount several unpleasant incidents with migrants from the Northern Caucasus who behaved in an aggressive way and would not leave her alone. During the hot summer months, as well, she had experiences of “unsatisfied” men trying to put their hands up her skirt.

Buses, Trams, Trolleybuses, Marshrutkas - "When it comes to marshrutkas I’d rather walk.."

Marshrutka [type of mini-bus] at Saliama Adilia Street in Moscow. Photo: WikimediaCommons|Андрей РоманенкоBuses, trams and trolleybuses in or around the center were considered quite safe by a few of the women.

“To be honest these are quite safe. They only get uncomfortable when it’s rush hour and there are lots of people,” Natalia O. told A Safe World.

“Trolleybus B, for example, the one that goes around the Garden Ring never poses any problems....but I’d rather not take trolleybuses, buses or marshrutki (small shuttle buses) on the outskirts of town,” Natalia A. said.

“This is especially true of the marshrutkas. It’s a complete nightmare what goes on in there – they’re overcrowded, the drivers barely speak Russian yet still somehow manage to be rude, etc.”

This view that marshrutkas are probably the least trusted or safe form of transportation was echoed by Didar:

“I have a pretty positive attitude towards trams and trolleybuses but when it comes to marshrutkas I’d rather just walk. Honestly.”

When travelling late night most people – men and women – prefer to use a taxi. It’s fast and convenient thanks to the large number of taxi companies in Moscow. The taxi drops customers right at their doorstep so they do not have to walk through poorly lit alleyways. This form of transportation, however, does not guarantee safety.

As Natalia A. explained, she had an unfortunate experience even with a “legitimate” taxi company, where the driver was unstable and tried to assault her, drove in a way that could have gotten both of them killed and then proceeded to threaten her once he knew where she lived.

Mothers & Babies - “It’s really unsafe and uncomfortable to take the metro with a small baby."

Another aspect that makes public transportation an unappealing choice for some women is the lack of baby-friendliness. Darina used to take the metro before having her daughter but after she was born, she has not dared to take her child into the metro.

“It’s really unsafe and uncomfortable to take the metro with a small baby. There is no way you can get on with a pram so thank God I have a car. When I was pregnant I had to take the metro sometimes and the smells there were unbearable for me and not everyone gave up their seats for me.”

Natallia A. also remembered one or two instances when during her pregnancy an old lady yelled at her for not giving up her seat although she was 3 months pregnant or a drunken passengers “accidentally” falling on her on her 8th month.

Although all the women surveyed had some positive and negative stories to share, most of them seemed to agree that public transportation – especially the metro – is still the best way to get around despite its flaws.

“Yes of course it’s insanely overcrowded during rush hours and girls can sometimes encounter drunken pick-up line masters and thieves,” Margarita (25), a translator at a yoga center shared. “But in general I like it! As for me, it’s better than sitting around and wasting time in traffic jams.”