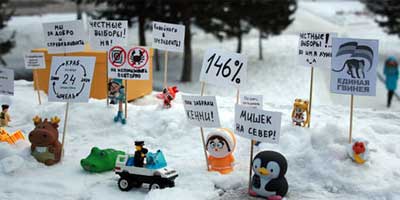 Police in the Siberian city of Barnaul have asked prosecutors to investigate the legality of a recent protest that saw dozens of small dolls – teddy bears, Lego men, South Park figurines – arranged to mimic a protest, complete with signs reading: "I'm for clean elections" and "A thief should sit in jail, not in the Kremlin".

"Political opposition forces are using new technologies to carry out public events – using toys with placards at mini-protests," Andrei Mulintsev, the city's deputy police chief, said at a press conference this week, according to local media. "In our opinion, this is still an unsanctioned public event."

Activists set up the display after authorities repeatedly rejected their request to hold a sanctioned demonstration of the kind held in Moscow to protest disputed parliamentary elections results and Vladimir Putin's expected return to the presidency in a March vote.

Passersby admired the display with giggles, but police took it more seriously, examining its details and writing down each placard.

"The authorities' attempt to limit citizens' rights to express their position has become absurd," said Lyudmila Alexandrova, a 26-year-old graduate student and protest organiser. "We wanted to hyperbolise this attempt and show the absurdity and farce of officials' struggle with their own people."

They are not the first. Russia's Blue Buckets group, formed to protest officials' wanton flouting of traffic rules, have run across government cars while wearing buckets on their heads, drawing the state's ire.

Voina, the rebellious art collective, won worldwide fame after painting a 65-metre-long phallus on a drawbridge in St Petersburg that, when erected, faced the city's Federal Security Service (FSB) headquarters. Its members have been repeatedly detained.

The activists in Barnaul say they have no choice but to adopt creative measures. Local authorities have refused to issue approval for opposition protests since 10 December, the first nationwide day of protest in Russia. Around 2,000 people turned out in Barnaul that day, an unprecedented number for the small city.

Police have tried to pressure them into shutting down the doll protests, organisers said. "They tried to tell us our event was illegal – they even said that to put toys in the snow, we had to rent it from the city authorities," Alexandrova said.

All authorities appear to be on high alert, as Russia prepares for its next day of protest on 4 February, one month before a presidential vote that Putin hopes will sweep him back into the Kremlin. On Thursday, the Moscow mayor's office approved the opposition's request to gather up to 50,000 people for a march through part of the city centre.

The jumpiest police were found this week in Kaliningrad, Russia's Baltic exclave. As two dozen nationalist youth took to the streets for a jog designed to promote a healthy lifestyle, carrying their traditional black, yellow and white flag, police descended upon the rally, having confused it for a gay pride parade. Gay rights remain largely unrecognised in Russia, and gay rights rallies are regularly banned. Police questioned the activists before releasing them, local media reported.