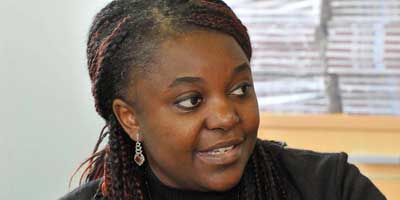 Ms. Kyenge, who is originally from the Democratic Republic of Congo, becomes the first 'new' Italian to become a minister in Italy.

She was elected to Parliament last February on the Democratic Party ticket.

For years, Ms. Kyenge has been fighting for rights of immigrants in Italy as one of the officials of the Democratic Party’s Immigration Forum.

Immediately she was elected to Parliament, Ms. Kyenge said she’ll seek to focus Parliament’s attention on the values they have been sharing at the Democratic Party’s Immigration Forum.

The former Provincial Councillor in Modena is a committed fighter for the full political participation of all and citizenship rights. She also strongly believes the Bossi-Fini Immigration Law must be abolished and a new just immigration law approved.

She believes that Italy needs to guarantee fundamental rights to all, including immigrants.

Ms. Kyenge has in the past warned that depriving part of the society of their rights would take the entire society backwards, and eventually lead to a society where nobody’s rights are guaranteed.

Explaining the importance of citizenship law reform, Ms. Kyenge said a new law was necessary as a recognition of the change that has already taken place in the country.

There are almost a million minor children of immigrants who represent the future of the country, Ms. Kyenge said. Out of these, more than 570,000 were born in Italy and more than 600,000 go to Italian schools.

She noted that the social security contributions of immigrant workers amount to 8 billion Euros while they pay at the same time taxes amounting to 4 billion Euros.

Ms. Kyenge said new citizens should have the right to fully participate in the society’s affairs and be granted the right to vote in local elections.

Her long experience in fighting for immigrants’ rights will be handy to her in heading the government’s Integration Department.

Cecile Kyenge is a doctor who was born in Kambove, in the Katanga province of the Democratic Republic of Congo.

Kyenge, a 48-year-old MP for the centre-left Democratic Party, will be sworn in as Integration minister on Sunday, April 28, 2013.

Married to an Italian and mother of two daughters, she has been living in Italy since 1983 when she was 18. She has a degree in medicine and surgery from the Catholic University of the Sacred Heart in Rome. She specialized in ophthalmology and is a practicing ophthalmologist.

In 2004 she was elected as a representative in a district of the town of Modena for the Democrats of the Left , and later she became the provincial head of the Forum of International Cooperation and immigration.

On 7 June 2009 she was elected provincial councilwoman in Modena for the Democratic Party and joined the committee Welfare and social policies.

She collaborates with the magazine Combonifem Immigration and Courier. She has promoted and coordinated the AFIA project for the training of medical specialists in the Congo in collaboration with the University of Lubumbashi.

She was elected as a member of parliament on February 25, 2013 for the Democratic Party in Emilia-Romagna. She will be sworn in as the new minister of integration for the Italian government this Sunday, April 28 becoming the first black to be a minister in Italy.