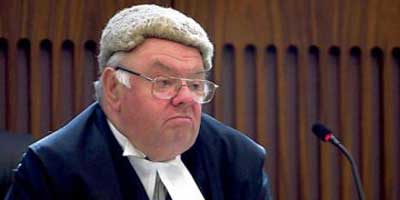 A woman who claimed she was gang raped while pregnant was arrested and imprisoned during the trial in the Republic of Ireland because she refused to give evidence.

"If she has to spend a long time in prison herself waiting for a re-trial that's her fault,"

During the trial the eastern European woman was made stand directly in front of the three accused and identify each one, a highly unusual practice. The next day she left a note for her partner saying she was so terrified she could not face coming to court again.

When gardai tracked her down she was rushed to hospital after they found she had taken sleeping pills along with half a bottle of vodka.

The trial was abandoned and she was brought before the court the next day in custody. She was kept in the holding cells for the day until a jury could be sworn in for a second trial.

Last Wednesday the three men accused of raping her were acquitted by a jury after a two-week trial. The arrest of the woman could not be reported at the time because of the risk of prejudicing the proceedings.

During the trial it was alleged the woman, who was three months pregnant at the time of the alleged rape, had vodka poured over her face, before the men took it in turns to rape her. She also claimed she had been urinated on and locked in a wardrobe.

On the first day of evidence the woman was telling the court that she was trapped inside a wardrobe by some of the men before being taken downstairs and raped.

There was some confusion in the Central Criminal Court as she tried to explain which of the men had done this to her. Mr Justice Paul Carney interrupted and told her she would have to go to the dock and point the men out. The visibly terrified woman was made stand in front of the accused men.

After evidence finished for the day, a barrister in the case said privately that he was sure the woman was going to collapse during the ordeal.

The woman, who now has an infant child, was due to continue her evidence the following morning. However when the court sat, Mr Justice Carney was told by prosecuting counsel that she could not be found and a warrant was requested for her arrest.

Garda Stephen Kenny explained that they called at the woman's home at 8.30am and were told by her boyfriend that he woke up to find a note from her.

Mr Justice Carney issued a warrant for her arrest and ordered that no discretion be used when executing it.

"If she has to spend a long time in prison herself waiting for a re-trial that's her fault," he commented.

Mr Justice Carney then told the jury: "The lady has chosen not to present herself today. I have issued a warrant for her arrest. There are three other cases awaiting trial. I don't have the mechanism to put you into cold storage so I will discharge you."

The next day Gda Kenny told the court that his colleagues had returned to the woman's house the previous evening and found her in a drowsy state.

She had drank half a bottle of vodka with an overdose of sleeping tablets and was rushed to hospital.

At this stage the accuseds' defence counsel raised the issue of bail. Gda Kenny said he had serious concerns about them being released as they were considered a flight risk. Mr Justice Carney interrupted, noting there was still an outstanding warrant for the woman's arrest.

Bail was refused for the men and the case was adjourned until the next morning. The woman was taken from hospital and brought before the court by gardai. The judge was told that she had been discharged from hospital and deemed fit to give evidence.

Mr Justice Carney ordered that she be held in custody until she finished giving her evidence. She was taken down to the holding cells below the court where her alleged attackers were being held. A source in the prison service insisted that the parties were kept separate at all times.

Ellen O'Malley Dunlop of the Rape Crisis Centre criticised a trial process as making the complainants "feel they are the ones on trial and not the accused".

"This system in our opinion is very imbalanced and needs radical reform. As a result Ireland has one of the highest attrition rates for rape and sexual assault cases in Europe," she said.

"One of the main reasons for this high fallout rate is because complainants decide not to put themselves through what they say is a re-victimising experience of a court process."