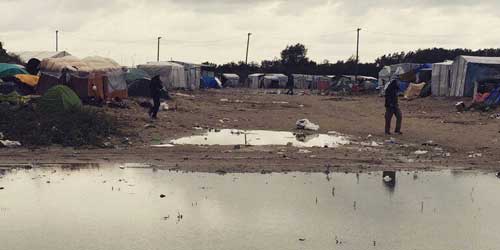 This month saw the publication of the first ever report into the conditions inside the refugee camp in Calais, which is estimated to house over 3,000 and is often referred to as ‘The Jungle’, after research was carried out by the University of Birmingham, in partnership with Doctors of the World. The report focuses on five particular areas: food and water; hygiene; physical injury and mental trauma; poor living structures and safety and security.

The findings in the report shine a light into the everyday life inside the camp and, in its own words, raise ‘grave concerns’ about the conditions people are living in. This includes people having to queue for over three hours to receive just one meal a day, a lack of adequate toilet facilities and medical care, along with high traces of e-coli within one of the water taps. The findings in the report have been welcomed by those who have volunteered in ‘The Jungle’, as it describes the reality of what life is like on the ground within the camp in Calais.

'Sewerage runs through the streets and the tap water isn’t safe.'

Amanda Wells, who has written a blog about her experience volunteering in ‘The Jungle’, said: ‘I’ve seen the exact conditions that the report details. Sewerage runs through the streets and the tap water isn’t safe. People are sleeping in tents which simply won’t be adequate for winter. In addition to this, the brutality of the French police is just horrendous. Tear gas cylinders are fired into the camp towards the area which houses women and children.’

'..the conditions are dire, it's dirty, there's no sanitation and the smell is acrid.'

While Roisin Bailey, who recently used her savings to volunteer in the camp for the second time, added: ‘When you look around the camp the conditions are dire, it's dirty, there's no sanitation and the smell is acrid. I’ve seen women trying to wash their hair in ice-cold water. As the sun goes down you can physically see the mosquitos hanging in the air, hovering around like seagulls. Disease and ill health are a major concern. There are several babies due to be born very soon and to think this is how they start their life is beyond comprehension.’ 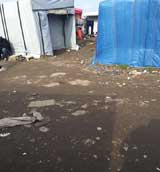 Photo source: Roisin BaileyOne of the most pressing issues raised by the report is the limited medical support received by people in the camp. The close proximity of people and the lack of suitable facilities for individuals to properly wash their clothes and bedding means that lice, scabies and even tuberculosis are common.

The need for better medical care for refugees is something that volunteers like Roisin have seen first-hand.
When asked about it she said: ‘As we were leaving on Saturday several men came to me complaining of sore throats, headaches, saying that they were unable to sleep and they were unable to swallow. I had some paracetamol and gave them out but unfortunately I didn't have enough and I had to turn people away.’

Concern about medical care outside of the camp has also been raised in the report, with claims that people with broken bones have been sent back to the camp from hospital without painkillers to help ease the pain, or crutches to help them get around.

Aside from the worries about physical health the report also raises alarms about the very limited mental health support. Many people living in the camp are suffering from PTSD as a result of fleeing war and persecution, while others have witnessed the deaths of fellow refugees on their journey to Europe. Yet despite this adequate mental health support has failed to be provided on a wide enough scale to deal with the large number who are in need of help.

Mimimal Toilet Facilities: '..those toilets we saw were filthy.'

Another focus of the report is on the lack of toilet facilities, with the camp having just 40 toilets for an estimated 3000 people. This equates to only one toilet for every 75 people at the camp, which means it is seriously failing to provide the UNHCR recommendation of ‘one per family unit (6-10 people) or in worst-case scenarios, one per 20 in emergency situations’.

When asked about the condition of these toilets, Alison Thompson - who has also blogged about her experience of volunteering at the camp, explained that many were not fit for purpose, saying: ‘I saw very minimal toilet and water facilities, and those toilets we saw were filthy.’

The limited number of usable toilets has in turn caused people to find other areas where they may relieve themselves. This is leading to problems when it rains, as it often means sewage is washed away to another area of the camp and it can spread harmful bacteria. This goes some way towards explaining the fact that traces of faeces have been found in the water system, along with high levels of e-coli being present in at least one water tap.

'Tents are definitely too cramped together'

Photo source: Alison ThompsonAlison also raised concerns about how adequate the shelter was, saying: ‘Tents are definitely too cramped together – think Glastonbury but living there permanently – and many are patched up or made from fabric and tarpaulin draped over flimsy frameworks.’

This mirrors similar concerns raised in the report. The research claims that tents are crammed together, making it easier for disease to spread, and many of the shelters are unable to protect people from the elements.

Another issue surrounding tents being so close together is the effect the proximity could have in the event of a fire, especially as there is no fire alarm and only two extinguishers across a camp housing over 3,000 people. Since people are only given one meal a day many people living in the camp have also started cooking in their tents, which is increasing the risk of a disaster happening.

One camp volunteer, who did not wished to be named, said: ‘The use of candles and gas lamps in tents, for both light and heat, concerns me greatly, as do the cooking fires being situated so closely to tents. Both of these are a fire hazard and carbon monoxide issue. When, not if, a serious fire breaks out it will spread with ease, the tents are so closely packed together and the use of gas canisters brings the risk of explosions if a fire takes hold.’

Despite the terrible conditions refugees face in the camps, many volunteers have been touched and inspired by the resilience and warmth shown by its residents. One volunteer, who also wanted to remain anonymous, said: ‘During my time in the camp I encountered nothing but respect, welcoming words and a level of generosity I have never encountered before. As I walked around I was offered endless cups of coffee, if people were cooking I was offered food, if they had two biscuits they wanted to give me at least one.’

This was similar to the experience of Roisin, who said: ‘Everyone was very kind, very helpful, the men carried bags for me and looked out for me’, and Alison, who spoke about being ‘surprised and heartened’ to see people so full of hope, despite the terrible conditions, and to see businesses, shops, school and library within the camp.

'..neglected, unwanted and uncared for by both the French and UK governments.’

Perhaps the most important thing we can take from both the report and the first-hand accounts of those who have volunteered in Calais is the fact that this camp houses real people, who are being forced to live in appalling conditions on the doorstep of two of the richest countries in the world. We may call it ‘The Jungle’ but in reality it is a refugee camp, which is falling well below the standards laid out in the UNHCR.

When asked about this Roisin said: ‘I prefer not to use the word ‘jungle' when referring to the camp. A jungle is somewhere beautiful where wild animals live. The camp is not beautiful and no animals live there, only people being treated as such. Human beings left to rot, neglected, unwanted and uncared for by both the French and UK governments.’

This is a humanitarian crisis unfolding on the outskirts of both France and the UK and the longer we ignore it, the worse it will become. This sentiment was summed up by Leigh Daynes, the Director of Doctors of the World, when he was quoted by The Guardian last week as saying: ‘This study exposes the awful truth about the Calais refugee crisis – that it is a humanitarian emergency of the first order in one of the world’s most thriving nations…This report confirms that we can no longer turn a blind eye to the dreadful humanitarian disaster on our doorstep.’

Report by the University of Birmingham in partnership with Doctors of the World:
'An Environmental Health Assessment of the New Migrant Camp in Calais - October 2015'

Amanda Wells is a co-founder and director of:
East Lothian Aid for Refugees

Blog by Alison Thompson, detailing her time volunteering at the camp in Calais:
'Welcome to the Calais Jungle'