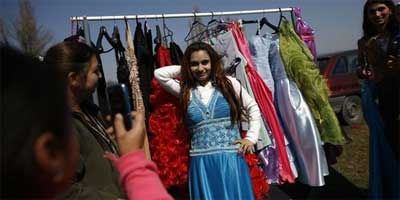 Marginalised by Bulgarian society - dreaming of a better future

"Me, I’m Roma, you can see that. But that doesn’t mean I’m any different from you or your mother."

It is no secret that Bulgaria, being a small country where the prevailing attitude is still one of traditionalism, has had its share of problems with the integration of minorities.

While formally every step is taken to ensure equality, many Roma people still live in ethnically defined communities, largely separated from the majority.

The debate over which group is at fault here is old, tired, and ongoing. However, the undeniable fact is that the divide leaves the people in small isolated communities. They have to revert to a specific standard and a specific model of living. These people are mostly perceived to live on the fringes of society. While they do participate in institutions like education, contribute to the job market, and some of them are even regular voters - the social, cultural, and most of all religious divide is always present.

This is usually made obvious in the tension between communities, and in the attitudes and informal discussions among people – not so much institutionalized, as it is internalized marginalization on both sides.

Such occurrences and the separation of some Roma in slums, and other decrepit areas of the city, only help to deepen the segregation of the people, despite being largely due to factors that have little to do with any  qualities inherent to the minority, and more with their environment and the attitudes towards them.

The important thing to consider here is that both statistics and interaction with actual Roma communities paint a vastly different picture from the standard media portrayal of these people. Statistics about ethnicity and crime show that the percentage of criminals and suspects in the 15-30 age group, is consistently level with the overall for the country.

However, there are some marked differences, apart from the geographic separation, which could account for the marginalization of the group. The same statistics show that Roma people –  particularly Roma women, are more likely to be engaged in prostitution or petty theft than any other type of law violation. As this is a type of offence, more visible to the general public, it could account for the negative image.

It is a particularly important sign that most petty crimes perpetrated by the Roma are gender-specific to women.

Whether they are pushed into these types of crime or not is not quite clear, as those in such positions refuse to talk, and the women on the outside refuse to discuss and associate themselves with any kind of violation.

However, the women and men who are engaging in criminal activities get much more visibility in the media.

It is a widely known fact that a few hundred women across the country, operate as pickpockets under the guidance and protection of two or three powerful families. The self proclaimed “King of the Roma” Kiril Rashkov, is the notorious leader of one such family, who is serving a twenty eight month sentence for homicidal threats towards a supposed rival family.

This is a typical operational structure for organized crime among the Roma – many women at the bottom social structure, committing a variety of minor criminal offences, with one or two male leaders at the top, who run the entire operation. It’s a patriarchal family turned crime rink. The entire system perpetuates violence, particularly violence towards women at the lower levels. And as it would seem, the system works so well, that it is often untouchable by the law.

It’s generally very difficult to get any concrete information from women, as none of them want to be associated with the negative stereotype.

However, when cases of organized crime do emerge, more often than not, it is an entire family or clan that is involved in a variety of criminal acts, from prostitution and to theft. This is probably where the pervasive stereotype of the immoral Roma is rooted.

Nevertheless, this grim picture does not apply to the entire minority by far.

Many young Roma women, particularly those raised in smaller families and mixed neighborhoods, are now setting their sights on higher education and white-collar careers.

17 year-old Raina, is one such woman.

This summer, she told me, she will be applying for an economics degree at several major universities across the country:

“I know how it is for a lot of girls my age. They don’t want to study, or they can’t. Three of my classmates got married last year. But that’s not right for me. I’m lucky my parents are letting me do this. They really want us (Raina has two brothers and a sister) to do well.”

Raina is not the only one in this situation. Statistics show that 0.3 percent of the Roma community graduated in 2006, with another 0,4% still in higher education.

These numbers are still startlingly low, but while there hasn’t been another similar census since then, the percentage of Roma graduates is believed to be on the increase. More importantly, in the same data from 2006, 53 percent of minority students, and graduates were shown to be women, testifying to the fact that Roma women have access and are interested in higher education, as much as their male counterparts.

There is an undeniable link between a higher level of education and reduced levels of poverty and crime, across all ethnic backgrounds. Perhaps this increase in educational opportunities heralds better times for Roma women.

The Bulgarian government has also taken a renewed interest in the integration of the Roma as of recently. An example of this is the fact that in the state budget for 2013, over 13 percent of the funds allocated for the development of human resources will go into education and training initiatives, geared towards minorities. While such programmes, geared specifically towards women are still few and far between, this is definitely a step in the right direction.

“I got married when I was fifteen, and never finished school. I would have continued – maybe studied to be a doctor, but you do what’s best for the family.

It’s hard, you know, but we make do. I work whenever there’s work. I have 10 people in my family. Three daughters and two sons, and one of my daughters has a daughter herself.  My granddaughter is seven. She’s such a smart girl. But she’s going to get an education and become something. She’s going to be an important person. I want her to learn, to become a big person. It’s for them we work, you know?”

Katerina, what would you like to see changed in Bulgaria?

“Well, the politicians don’t care, everyone knows that. We work, and work, and get poorer all the time, while the rich get richer. My husband’s pension is getting cut again. But that’s what always happens, no matter who’s in power. I don’t care about that.”

Do you vote? And do you think people treat Roma women differently?

“No. Why should I? Nothing changes either way. It’s all the same.

The bad thing is when people separate us.

Me, I’m Roma, you can see that. But that doesn’t mean I’m any different from you or your mother. Some people know that and some, you can just see it. The way they look at me and talk to me, it’s different. They think I’m not like them. We’re really all the same, especially now. Everybody is struggling. It wasn’t like this twenty years ago.”

Why? What has changed since then?

“Well, when I was younger, it was also hard, but at least you didn’t have to fear for the children. Now, when I send my granddaughter to school, I’m afraid someone might give her drugs, or make her do something. The kids are always good when they’re little, but what happens when they grow up? There are so many bad people and they try to make kids do bad things.

They can see that my granddaughter is poor, she gets less pocket money, so that’s the one they’ll go for and make her sell cigarettes or something worse. That’s why I worry. I do the best I can. My biggest hope is for her – to study and to go far. I want her to do good and to be safe.

It’s all I want and that’s what I work for.”

Toward a Positive Future

The conversation ended on a positive note. Katerina’s voice gets hopeful every time she mentions her granddaughter, and it is clear that she has invested most of the ambitions she has had for her own life, into the little girl.

There is little mention of the men in Katerina’s life. What is striking is that, whenever they do come into the conversation, she always sounds protective and motherly, rather than dominated in any way.

Talking to Katerina makes it clear that there is reason for hope in the situation of Roma women.

Victoria Pavlova is a Safeworld Student Writer and is studying Politics and Sociology.

"Born and raised in Bulgaria, I’d been used to a certain way of life, which my recent move to England has put in a new light.

I’ve always found curious the extent to which people (including myself) take culture for granted and internalize it...

There seems to be a degree of objectivity that comes with travelling and this is a quality that I hope I can transfer to my work for Safe World and to a successful career in journalism after university. I believe that words hold the biggest power – to change minds – and they should be used well."