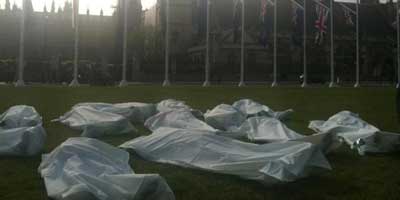 On a sunny London morning, amidst the rush hour traffic, body bags lie strewn across major landmarks- Parliament Square, Piccadilly Circus and Trafalgar Square. Police vans pull up to investigate and policemen appear bemused as they are handed flyers by activists. The bodies in the bags are real, but they are alive. This is a peaceful protest aimed at highlighting the continued use of the death penalty in Belarus.

Commonly referred to as 'Europe's last dictatorship,' Belarus lies between Russia and Poland. Belarus bore the brunt of the Chernobyl nuclear disaster in 1986, though Chernobyl is across the border in Ukraine, with the UN speculating that 70% of the nuclear fallout fell on a quarter of this country of 10 million. Instances of cancer and birth defects sky rocketed in the country; a staggering 85% of all Belarusian children today are classed as victims of Chernobyl, due to the long lasting effects of radiation. Wide swathes of agricultural land were contaminated and parts of the country in the south were eventually abandoned, too toxic for life to continue.

The social and economic legacy from the Chernobyl disaster is extremely significant for Belarus' relationship with the EU and wider International Community today. With few economic or development prospects due to long lasting radiation, the EU has taken little interest in human rights abuses in the country. Opposition to Lukashenko, President of Belarus for almost 20 years, is brutally suppressed. Following popular protests after the 2010 presidential elections, which did not meet international standards, Lukashenko embarked upon a particularly savage crackdown on dissent. Opposition politicians have been summarily arrested and illegally detained. Human rights activists are harassed, intimidated, beaten and NGOs have had their offices raided and computers seized. With little outside investment and thus, political involvement, in the country, Lukashenko has acted with almost complete impunity.

The London protest, carried out by the Belarus Free Theatre and Free Belarus Now, was aimed specifically at highlighting the continued use of the death penalty in the country. Belarus is the only European country which has not abolished the death penalty. Typically, death row prisoners are shot in the back of the head, their remains secretly buried and their families notified later. It is a brutal method of justice which is particularly worrying when the legal system bestowing such a sentence is extremely flawed.

In 2011, the Metro system in the capital city of Minsk was bombed, killing 15 and injuring 200. The Belarusian authorities arrested two men in their twenties a day later- Vlad Kovalev and his flat mate, Dima Konovalov. The men confessed to the bombing, though later they retracted their statements, claiming they were tortured by police. No motive or reason was given for the attack they supposedly carried out and there was little evidence shown of their supposed involvement. They were convicted in a trial which was critisied as fundamentally flawed by Belarusian opposition and the EU. Even the FSB, the Russian security services, found the evidence provided by the Belarusian state did not point to the two suspects. Regardless, Vlad and Dima were executed.

Belarus and the EU

The EU has consistently failed to take a strong position on Lukashenko. A previous travel ban was lifted in 2008, only to be reinstated in 2011 but is often ignored. In 2012, Lukashenko was allowed travel to France to visit Interpol HQ. The Secretary General of Interpol, Ronald K. Noble, muddied the waters by praising the professionalism of the Belarus authorities in apprehending the Minsk bombing suspects- a statement which was widely ridiculed by all with even the most cursory knowledge of how Belarusian authorities operate. In March of this year, EU High Representative for Foreign Affairs and Security Policy Catherine Ashton issued a half hearted statement on the death penalty in Belarus, urging the country to join an international moratorium on its use. The EU, disappointed with the lack of impact sanctions were having on the ruling regime in Belarus, has recently made more positive overtures to Lukashenko but these have not been reciprocated. Lukashenko will not engage with measures aimed at improving human rights and democracy in Belarus. Solely interested in maintaining authoritarian rule, only regime change will bring about any hope of economic, social and political improvement in Belarus.

Catherine Ashton statement on Belarus and the death penalty