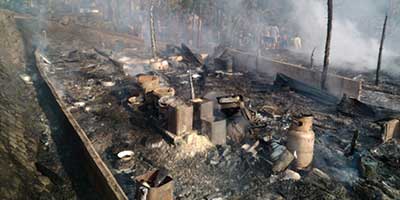 I regret to inform you about a fire in Mae La refugee camp yesterday December 27 [2013] and which  destroyed around over 100 temporary shelters in Zone C.  It is difficult to get direct information on the ground. At any rate, we shall coordinate with our local Karen partners and to verify if there are WEAVE artisans who are affected.

Mae La is home to over 60 refugee women artisans in WEAVE's Fair Trade Social Enterprise who have to toil hard to provide for their and their families most needed income.

This unhappy end of the year for the refugees is a reminder to us all of how vulnerable their lives are.

Naw Blooming Night Zan, a spokesperson for the Karen Refugee Committee told Karen News that an emergency meeting was quickly organized with the Mae La camp officials, non-government-organisations, the United Nations High Commission on Refugees and officials from the Thai government in an effort to deliver emergency relief – food, blankets and shelter for those affected by the fire.

Naw Blooming Night Zan said that three camp residents “were injured, one with serious burns who had to be taken to hospital for treatment.”  Refugees made homeless by the fire were given shelter at a school and others stayed with friends and relatives in the camp. 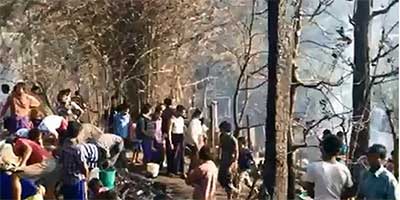 Refugees look on as firefighters attempt to quell the blaze at the Mae La refugee camp. | PHOTO: DVB

A fire has destroyed an estimated 102 buildings in Mae La Refugee Camp, 57km north of the Thai town of Mae Sot.

Camp officials say the fire broke out in Zone C at the Mae La Refugee Camp today at 1.30pm and lasted until around 3pm.

Naw Day Day Poe, joint secretary of Mae La’s camp committee confirmed to Karen News that the number of buildings destroyed is 102. “The fire has now stopped, but it we know that a 102 buildings were destroyed. The fire started at around 1.30pm today in Zone C Section 3 and raged until 3pm.”

Naw Day Day Poe said it is too early to estimate how many people have been injured, but confirmed one child and one adult have been hurt and there are concerns about one missing child.

Mae La camp residents were helped by two Thai firetrucks to bring the fire under control.

Mae La camp is home to around 53,000 refugees, the majority of the camp residents are from Karen State.

This not the first time fires have hit the estimated 160,000 refugees living in the 10 refugee camps on the Thai Burma border.

In February 2012, there was a huge fire at Umphiem Refugee camp where over 500 houses were destroyed by fire and another 500 houses dismantled to prevent the fire from spreading. Over 4,400 refugees were affected by the fire. Umpheim Mai is home to over 14,500 refugees and located 87km south of the Thai border town of Mae Sot.

In April this year a fire killed 35 refugees and destroyed most of the Ban Mae Surin refugee camp.

People living in the camps along the Thai Burma border are scared that their respective camps are firetraps and claim that the camps compulsory precautionary measures of filling plastic bags with sand and water to use in case a fire breaks do not offer enough protection.