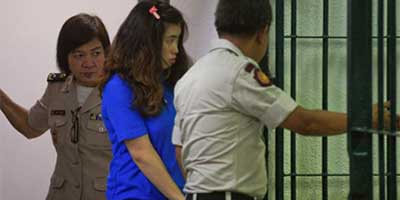 A Thai court has sentenced a woman to five years in jail for breaching the kingdom's strict royal defamation laws in the the second such conviction in days.

Nopawan Tangudomsuk was found guilty of insulting royals and breaking computer crime laws with comments posted on a popular website in 2008.

Under the controversial lese majeste rules, anyone convicted of insulting the Thai king, queen, heir or regent faces up to 15 years in prison.

Ms Tangudomsuk was initially acquitted in a 2011 trial when prosecutors failed to prove she was behind the posting on the Prachatai site.

A court official says the appeal court "decided to reverse the ruling" in Ms Tangudomsuk's case, adding that she was "found guilty of violating article 112", the kingdom's royal defamation law.

The ruling comes a day after the founder of the royalist "Yellow Shirts" was sentenced to two years in prison by the same appeal court under lese majeste laws.

Sondhi Limthongkul, one of Thailand's most controversial political figures, was convicted after prosecutors appealed an earlier acquittal over remarks quoting a speech by a political rival in 2008.

The "Red Shirt" activist whom Mr Limthongkul quoted was jailed for 15 years in 2011 for comments made during political rallies.

The royal family is a highly sensitive topic in Thailand, where 85-year-old King Bhumibol Adulyadej is revered.

The kingdom has come under fire from rights groups and media freedom campaigners who say its defamation laws pose a threat to freedom of speech.

Critics say many of those charged over recent years are linked to the Red Shirts, who are loyalists of former Prime Minister Thaksin Shinawatra.

Earlier this year, a leading world press body warned that royal defamation laws were creating a "climate of fear" and were being misused to wrongly imprison journalists.