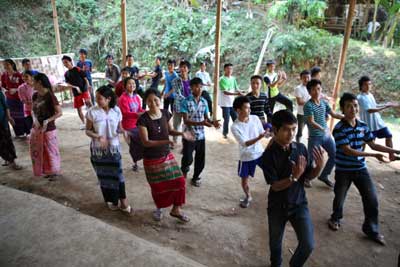 Photo by Thin Lei Win - Before the fire

In early March, I visited two refugee camps along the Thai-Myanmar border to report on the challenges facing refugee women and girls and was struck by the enthusiasm of students I met in Ban Mae Surin, a camp set in a remote but picturesque setting along the Mae Surin river.

The students were part of the Karenni Further Studies Programme and were rehearsing a group dance for International Women’s Day celebrations on March 8.

On that day, they learnt the dance moves for a song that calls for the elimination of violence against women and girls. Despite the sweltering afternoon heat, the four dozen or so students – and some alumni – practised non-stop.

In a normal schoolroom of 17 to 23 year olds, you’re sure to find some who would refuse to participate in such an activity because it’s ‘uncool’, no matter how worthy the cause. I would’ve been one of them, but there was none of that cooler-than-thou swagger in this group.

Of course this wasn’t just any ordinary schoolroom. Many students were born and raised inside the camp after their parents fled political persecution and economic difficulties in Myanmar. Others are relative newcomers who crossed the border five or six years ago for the same reasons.

Despite the difficult and restricted lives they’ve led, many were full of hope and energy, and clearly enjoyed learning, whether about conflict resolution or dancing.

A little over two weeks after my visit and right after those students had their graduation ceremony, a devastating fire swept through the camp, killing 37 people, destroying more than 400 houses and leaving 2,300 people (out of a population of 3,500) homeless.

This photo shows how Ban Mae Surin looked during my visit, facilitated by a small NGO called  WEAVE which was supporting the further studies programme. I was told the camp is flood-prone during the monsoon season, cutting it off for up to two months if the rains were particularly heavy. My hosts didn’t anticipate a fire.

These next photos show what it looked like after the fire. Two of the four sections of the camp were completely burnt down.

My colleague Alisa Tang wrote about how the fire spread so easily because the homes were built using bamboo and leaf thatch. The Thai government doesn’t allow the use of more permanent, fire-retardant materials because these camps – there are nine along the Thai-Myanmar border, housing some 140,000 people – are supposed to be temporary, even though many have been around for more than two decades. 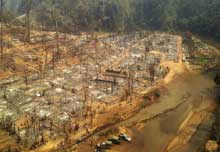 There are also questions about how the fire started: The Bangkok Post has a good piece that raises doubts over the official explanation that it was a cooking accident.

I found out that two young men who were so enthusiastically practising their dance moves the March afternoon I visited died in the fire. One was an alumnus who, after saving two children, tried to save a third, but was engulfed in the smoke and fire. The other young man was a student who had graduated just hours before the fire.

The family of Saw Gay, a 19-year-old student who wants to become a teacher so he could impart his knowledge to children in the camp, was one of those who lost all their possessions and livelihoods.

The families with whom we shared meals and the families who gave us room to sleep that balmy night I spent in the camp are homeless now, too, and I keep thinking of this young boy downstairs from our bedroom who was studying by candlelight.

Did he manage to save his exercise books? Where will he study now?

The Border Consortium, an NGO that has been working in the camps along the border, has launched an emergency appeal for $433,000.

Food and shelter are the two big needs, of course, and the hottest days in Thailand may be yet to come.