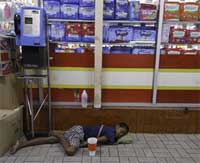 In an impoverished town in Thailand near the border with Myanmar, a trafficker offered a desperate Burmese widow 5,000 baht (US$160) on the spot, followed by an additional 4,000 baht ($120) per month for two of her 10 children to sell flowers in the Thai capital, Bangkok.

The rent-a-child deal was to last three months, after which the boys would return home.

But the deadline passed and the monthly payments stopped. After another three months the older brother, 10-year-old Ongsi, ran away and managed to make his way home to tell his mother they had to return to the capital to rescue 8-year-old Siyathon from a life of late-night flower selling and beatings.

Their case is not unusual. Across the city of more than 10 million, little Burmese vendors sell flowers and Cambodian children beg money from motorists, tourists and bar crawlers.

“Most of these children are not Thai,” said Witanapat Rutanavaleepong, who manages the Stop Child Begging project for the Mirror Foundation, a leading Thai NGO that has become a focal point for child trafficking.

He estimates there are at least 1,000 child beggars and flower sellers working in cities and tourist spots around the country. Since he began working with the Mirror Foundation two years ago, Witanapat has come across only one case involving three Thai children, although he handles up to 30 cases a month. The problem remains intractable in the capital.

“Thailand has a problem with child begging that is hard to solve because the authorities do not see it as a problem that affects their [the children’s] future or society,” Witanapat said. “They see them as only child beggars, but the girls and some boys often go on to become sex workers, and the boys often become traffickers themselves.” 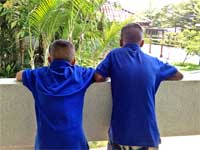 Eight-year-old Siyathon, left, and Ongsi, 10, are now back with their motherThe initial journey from their village to Bangkok was harrowing, said Siyathon, who speaks Thai fluently although he is Burmese.

“I spent the night in the forest, walked for a day, and then a truck took me to a gas station where a taxi brought me to the house [where I stayed],” he told IRIN at a boys’ shelter in Pak Kred in Nonthaburi Province, a northern suburb of Bangkok. His brother joined him soon afterwards.

One day, Ongsi, his older brother, managed to escape with some friends, and eventually made his way home to Mae Sot Province, several hundred kilometres away.

Ongsi returned to Bangkok with his mother, but they were unable to find Siyathon on their own and sought help from the Mirror Foundation and the police, who sent plainclothes officers to an area known for trafficking children. In late April they spotted a child who fitted the description.

“One female officer called out his name, ‘Siyathon!’ and he turned to face her. We found him,” said Lt. Col. Choosak Apaipakdi, of the police anti-human trafficking division. “When the owner of the home followed the boy out, we assumed she was the trafficker. Police confronted and arrested her.”

The United Nations Inter-Agency Project on Human Trafficking (UNIAP), said the number of children begging and selling flowers remains unclear, but the problem is significant. Lisa Rende Taylor, chief technical advisor for UNIAP for Southeast Asia, said children are being rented or sold by their families or guardians, and then controlled in order to make money for someone, and whether or not permission was granted, these children are victims of trafficking.

“The definition of child trafficking is essentially the act of recruiting, harbouring, or receiving a child for the purpose of exploitation. The child could go along with it, the parents at home could go along with it - it doesn’t matter - there does not need to be deception or force. If it is a child, if someone receives and controls them, it is trafficking,” Rende Taylor said. “You just have to walk the streets of Bangkok or Pattaya [a resort town] to know that this is still an issue.”

The typical payment for a rented child is reportedly around $25 a month, she said. However, it is hard to crack down on the trade when there is a “revolving door at the border”, and a focus on the children rather than on the criminal perpetrators.

According to the US State Department, Thailand remains a source, destination, and transit country for trafficking men, women and children. Most of the trafficked victims identified in Thailand are from neighbouring countries like Myanmar, Cambodia and Laos, and have been forced, coerced, or defrauded into labour or commercial sexual exploitation.