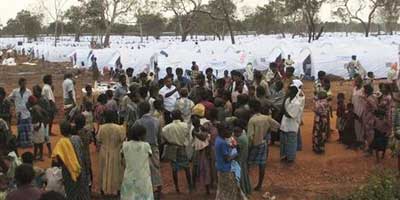 “There have been rapes. Girls are raped. But how will girls tell this out? They would be embarrassed”. First hand witness.

The most recent civil war in Sri Lanka left the pearl of the Indian Ocean a blood bath, with hundreds of thousands of Tamil civilians displaced. Two years after the war, the UN released a report finding the Sri Lankan government and the LTTE (Liberation Tigers of Tamil Eelam) guilty of conducting military operations, “with flagrant disregard for the protection rights, welfare, and lives of civilians and failure to respect the norms of international law,”

The Sri Lankan government has repeatedly denied all accusations of war crimes. Through the brutality of the war, humanitarian concern now focuses on the hardships faced following the war.

After the Sri Lankan government had claimed victory, civilians were unable to return to their homes for all that could be found, according to some NGO reports, was the aftermath of bombings, or villages taken over by the military.

Civilians who had hoped to return back to familiarity, instead returned to the destruction of land, homes, and memories, and thus, forcing them to live in  UN-funded camps.

Moreover, these conditions are jeopardizing women and girls' safety, making them more vulnerable to sexual violence.

Hundreds of thousands of civilians were forced to flee their homes during the civil war, and sought refuge in safe zones. Now that the war is over, the question arises as to what has become of the internally displaced – and whether returning home is a prospect worth considering.

In September 2009, Sri Lankan President Mahinda Rajapaksa promised that a quarter of a million Tamil civilians who were displaced by war would be released from camps and resettled in four months.

What was then an ambitious statement is finally taking effect. Three years later, the vast majority of displaced civilians have returned back to their homes.

However, there are an estimated 110,000 persons still in camps, and several thousand unable to return, because their home areas have not been “demined”.

The government has still not granted international demining agencies access to several areas.

One major concern is the government’s failure to release the names of thousands of Tamils detained in various sites across the country, leaving many Tamil civilians in an unknown situation and families fearing the worst, states Sri Lanka analyst and expert Charu Lata Hogg.

Amid the crowded camps, the lives of women and girls have been greatly violated during their time within these camps. Women have been harassed, raped and abused.

A first hand witness said, “There have been rapes. Girls are raped. But how will girls tell this out? They would be embarrassed”.

The witness went onto say that not only were women raped but; “They would be very violent. They are Singhalese and we are Tamil. We are scared of everything. We don’t know the language. Women are looked at voyeuristically.”

Restrictions Relaxed, but Conditions are Poor

Camps are separated into zones and face a number of issues. One of the most concerning issues described by an eye witness, has been the separation of families –  with a mother and daughter being in one zone, and the father being in another.

According to an eye witness, the authorities are taking no productive measures to reunite the families. Furthermore, the eye witness reported that conditions were poor:

“There was dirty water running on both sides of the road where drains have been freshly cut. Flies are rampant and hygiene is a life-threatening issue. Toilets were inadequate. In one camp we saw some of the tents having been removed, and this area was being used as open defecating areas. On both sides of the road you could see human waste.”

Channel 4 News UK has reported, and released footage showing the poor extent of the living conditions within these camps, with “patients on intravenous drips lying on mud floors”.

Lives in the camps have been gruelling and unsafe. However, hope was restored when rules – which prohibited access to affected regions for outsiders for many years by the military, had been relaxed. This relaxation of restrictions has encouraged displaced Tamil civilians to return to their home villages in the northern regions of Sri Lanka.

Despite this new hope from the relaxation of restrictions, it still did not mend the lack of trust and hostility that Tamil civilians upheld against the government.

This distrust was further fuelled by the lack of rehabilitation, and support given to civilians. A Tamil woman in a BBC report stated that civilians received “less than a dollar a month... the government is not helping us”.

A problematic area is that of governmental help. Expert Charu Lata Hogg, reporting in her paper “Sri Lanka: Prospects for reform and reconciliation”, found that the international monetary fund injected a $200 million (USD) loan into the economy.

This raises questions as to where the fund is being spent, and why is it not being spent on war victims, thus increasing the distrust in the government.  Charu Lata Hogg states in her paper that “investment remains low, and high youth unemployment and continuing poverty in certain provinces, including north-east coupled with low trust in the government, pose significant risk factors to future growth.”

Thousands of Widows Defenceless and Alone

Sri Lanka’s employment rates, investments, and rehabilitation have decreased in recent years; however, one area which has increased is the presence of troops.

Government funded troops have vastly increased within the northern and eastern areas of Sri Lanka; “with one soldier for every 10 civilians, life on the peninsula does not yet bear the hallmarks of peace”. Charu Lata Hogg states in her Sri Lanka paper that, “community workers have reported that the level of military scrutiny in northern Sri Lanka is so high that civilians have to seek permission even to hold religious or other personal gatherings”.  This raises great concern as to whether Tamil civilians will ever be able to reach a state of ‘normalcy.

For many women, returning to normalcy and their lives before voluntary repatriation is non-existent.

The Sri Lankan government estimates that the ethnic conflict has widowed 59,000 women; women must now carry the burden of being the breadwinner, leaving them vulnerable in such post-war situations.

Not only are these women fraught with many dangers in their quest for day-to-day living, but they have are also left traumatised from experiencing or witnessing acts of violence, as well as witnessing the loss of their loved ones.

The programme paper states that large numbers of army personnel has increased the vulnerability of women to violence and other forms of abuse.

With 59,000 women widowed, women are left defenceless, unprotected and alone.

A recent report released by the International Crisis Group (ICG) further highlights insecurities of Tamil women in the island country. “Women often have to rely on male Sinhalese soldiers for information, goods and services… All of this compounds women’s exposure to risks,” the ICG’s report says.

Desperation: Turning to Prostitution to Survive

Not only has the vulnerability of women increased, but war widows have even turned to sex work in Sri Lanka in order to fend for themselves.

The lack of male bread winners has placed women in a position of desperation in supporting their families and employment opportunities in a post-conflict society have become a major challenge for these women. Such challenges and pressures have led many women into prostitution.

An activist, who does not wish to be named, fearing retaliation from the Sri Lankan government, is quoted in the ICG report as saying, “There are definitely cases of Vanni (a region in the Northern province) women being promised work in the south and ending up in brothels or sexually abused on the way to garment factories where the terms and conditions are not what they were told.”

Many reports of Tamil girls ending up in the brothels of the south have surfaced in the media recently. “Like all sex workers in Sri Lanka and most other countries, the Tamil women who find themselves in prostitution face serious risks of violence, disease and social ostracism,” one report says.

Despite all the downfalls and hardships the war has brought with it, the government has finally allowed people to return home. However, although the government seems optimistic, locals say their farmland is full of wild shrubs now and will take many months of hard labour before the fields can once again become productive.

Help from local non-governmental organisations (NGOs) could provide more assistance if the government provided them with access to northern areas. Mullaitivu government agent Emelda Sukumar said, "We have asked the NGOs to provide us with proposals regarding what they intend to do. We want to define the areas of work before giving them permission. We don't want a duplication of work,"

NGO’s have now been given permission to provide international aid: the World Food Programme, the International Organization for Migration, and the UN High Commission for Refugees.

Although life will be difficult, schools and hospitals are re-opening –  a sign of hope that hardships faced will be soon in the past. Nonetheless, the pain and suffering as well as the shock of the war are something that will never be forgotten by Tamil civilians.

Recent reports of an individual’s torture after being deported from the UK last year has raised great concern. The report was made during jubilee celebrations, whereby commonwealth states were invited for lunch.

The victim spoke up to The Guardian of his torture on deportation. His torturers accused him and two dozen other asylum seekers of passing on to British officials information about previous beatings at the hands of state officials and other human rights abuses, to ruin diplomatic relations between the two countries.

Reports of torturous behaviour such as that described by the victim to The Guardian –  “beaten by rods, petrol-filled plastic bags pulled over his face, hung by his feet with a nylon rope”,  put great pressure on The Home Office to change their policy. However, The Home Office –  quoting a European court ruling, held that “Not all Tamil asylum seekers require protection”.

Nonetheless, the severity of ill treatment on return to Sri Lanka is a matter of major concern – and in a dramatic turn of events, a senior high court judge two weeks ago halted up to 40 deportations from taking place as the plane waited on the tarmac.

It seems like the voices and needs of both those Tamil civilians internally displaced and those seeking refuge in other countries are finally being heard.

Leaving civilians with hope that normalcy may take time, and is underway; however, the distrust civilians have in the Sri Lankan government appears to be piling up and will continue until justice is done.