Hopes for Pardon of Lankan Housemaid on Saudi Death Row 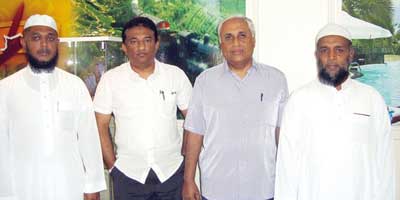 A Sri Lankan delegation visiting Dawadmi, 380 km from the capital, was given a warm welcome by the Otaibi tribe leader Mohamed Faihan Shoraim Al-Otaibi.

Nafeek was convicted of murdering a four-month-old infant in Dawadmi on May 2005. The warm welcome accorded to the visiting panel raised fresh hopes for the release of death row housemaid Nafeek.

According to legal experts, Nafeek can only be saved if she is pardoned by the victim’s family. The pardon can be offered with or without a request for blood money.

“We are leaving the shores of the Kingdom with an ardent hope of getting this convicted maid released on humanitarian grounds,”  Thassim told Arab News on Friday on the eve of his departure.

“We were given a warm welcome by the members of the Otaibi family in Dawadmi under the leadership of Faihan, who said he would do all that is possible under Islamic law to release the maid who was a victim of circumstances,” Thassim noted.

Speaking on the occasion, Jamaldeen said the Sri Lankan government respects the laws of the host country. “We only seek pardon from the parents of the deceased infant according to Islamic Shariah.”

He added that the visit opened a new chapter in the relations between the Otaibi family and the government of Sri Lanka which would eventually lead to a happy ending.

Gov. Mowlana told Arab News that he was happy that the visit opened a dialogue between the two parties. He said he was positive that the parents of the deceased child would graciously pardon the maid on sympathetic grounds.

The governor thanked the Saudi government and its embassy in Colombo for paving the way for a smooth dialogue between the parties.

The delegation also met Mirdath Fahad Al-Otaibi, grandfather of the deceased infant.  Mirdath told the visiting team that he would negotiate for a pardon from his daughter and son-in-law Naif Jiziyan Khalaf Al-Otaibi to release the maid from death row.

Nafeek was sentenced to death by a three-member bench at Dawadmi High Court for killing the baby she was entrusted to look after in the absence of her Saudi employers at home. The accused maintained that the newborn choked during bottle-feeding, and that she tried to seek help.

In August this year, the Royal Court handled Nafeek’s case to reach an amicable settlement with the Saudi parents of the victim.

Write to the King!