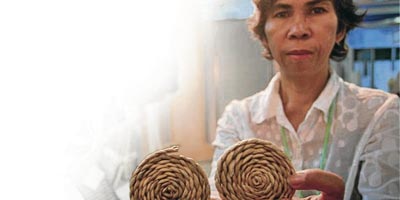 A bane, as many put the mammoth sight of water hyacinth native to the Ligawasan Marsh, but a boon to a woman who is cashing in on its fiber.

Melinda Bonayos, 49, was clearly the most admired participant at the South Cotabato’s Industrial Expo 2011, a fair showcasing locally produced food, arts and crafts, as all eyes are into her pile of colorful bags and slippers.

“The response I got at the fair from people has been overwhelming. Everybody is amazed by the quality and strength of the materials, and beauty of the products,” she says, adding that she has got trade inquiries from other towns already.

Deemed as weeds that clog bodies of water the world over, and blamed in the massive flooding across the low-lying villages around the region, the water hyacinth emerged as a source for handicraft as diverse as bags and slippers for Bonayos, even opening up a venue to showcase her craft among other interest groups.

The government’s huge spending of public money to clear the courses of Rio Grande de Mindanao of the weed saddens Bonayos. “If only they could just give me those,” she sighs of the utter waste of raw materials. “If only closely watched with creativity, the water hyacinth can build a fortune.” For five years now, the scope of the water hyacinth has proven huge for Bonayos. She has used its fiber, and soon will explore further its other use despite the intricate work involved. “The raw materials abound, but I need to persevere on the job.”

Bonayos, considered the pioneering weaver by colleagues, picked up the skill in the 1980s. She left for Sabah in Malaysia in 1989 to harness her knack in needlework in a private company. Bags, stuffed toys, wall decors, quilting and dressmaking – she made them all. A year after, she was hired by a client from Kota Kinabalu to train Malaysian and Cambodian nationals in weaving.

But her two growing children left in Tacurong with her husband proved so hard for Bonayos that she left Malaysia in 1994 and went back to the Philippines with about P30,000 savings, which she used as start- up funds in churning blankets and pillow cases she sent to her sister who sold them in a five-star hotel in the Middle East.

The business was short-lived as she became pregnant with her third baby. “I often got sick and my assistant could not do the job anymore, so I had to stop running it.”

She ventured in reselling charcoal but failed. Then the family grew corn in their farm.

In 2002, a Department of Trade and Industry pursued unemployed mothers to a livelihood training who knew sewing. Bonayos clinched a spot and nailed it. Bags made from Water Hyacinth

The training proved a feat for Bonayos and she took the job seriously.

In 2003, equipped and inspired by her new-found love in weaving raw materials, she bought sacks and sacks of corn husks for P3 a kilo and made a twine to create bags, slippers and mats. She registered Double Day Handicraft under her name, and it thrived for sometime. The negative feedback from her clients proved too daunting for her.

“The material is not good for handicraft due to its coarse feel,” she says.

In 2006, another DTI-led coaching pushed Bonayos to be extra creative. “They practically shook us … One trainer said that all raw materials around us can be made into handicraft,” Bonayos says.

Challenged, she scoured all the corners of Barangay Poblacion and found all kinds of grasses that are plentiful – sea grass, cogon grass, lemon grass. But their quality never passed her expectations.

Her search for the perfect raw material ended when she noticed a swamp of water hyacinth at the family’s backyard.

Intrigued at the sea of water hyacinth just at her swampy backyard, she dissected each part and focused on its stem. She dried the stems to sample its fiber following a rigorous treatment to achieve its desired form.

“The fiber turned out strong and could last,” she says. Luck has found Bonayos. And she began the hunt for the perfect stems across town. Bonayos proudly shows off her produce

On regular days, Bonayos can finish a medium-sized bag in two hours at the family home in Barangay Poblacion that serves as her production area and display center catering to walk-in clients. About 50 stalks make 25 meters of twine enough to fashion a purse, according to Bonayos, that costs P200 in the market.

She concedes, however, that her produce is limited because of the lack of capital and better equipment to enable her to mass-produce even if she feels comfortable to be self-reliant in this endeavor. Bonayos had previously joined trade fairs in Koronadal and Tacurong, and recently in Manila to gain mass support despite being cash scarce. Local governments, including the Sultan Kudarat government and government agencies, introduced her crafts in various trade fairs.

After successfully coming out with bags and slippers, Bonayos is now into the next level, by making cloth out of the fiber.

“I have just made one,” Bonayos says.

A Filipino designer based in Canada has called her of her recent discovery.

“If only the government would invest seriously in making a livelihood out of the many raw materials,” hopes Bonayos.

Bonayos, leading the pack, has taken the task of mentoring women living near the marsh where the raw materials abound.

A key role is played by the Women’s Rural Improvement Club Consumers Cooperative, a Gen. Salipada Pendatun-based group that she has trained how to process – from drying to treatment – water hyacinth suitable for craft work. The cooperative, formerly a catering enterprise by a handful of local government employees, has now grown to P600,000-worth venture of handicraft such as bags, sandals, mats, home decors and even twines, solely made from water hyacinth.

The cooperative, founded in 1994 by Pendatun, which now boasts of 1,600 members mostly evacuees women artisans who did not take much time to adapt to water hyacinth, now has its display center in Barangay Badak. Like Bonayos, the cooperative has exhibited in many expositions across the country, recently in Manila last April.

The men, who are not into weaving, earn from harvesting and drying stalks of the water hyacinths.

The cooperative harvests about 10 tons of water hyacinths each year.

The idea that struck Bonayos has started a new movement in the water hyacinth-rich areas in Maguindanao, and for her, it’s a better-late-than-never effort to save low-lying villages from destruction.