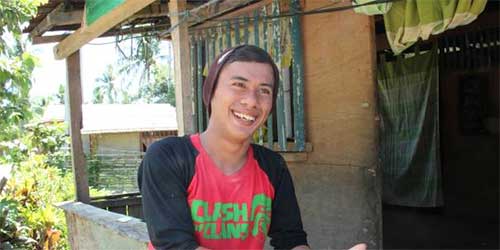 Marnel Arcones's face lights up with a huge smile when he talks about going back to school after years of toiling as a child worker in factories, on farms and as a domestic helper.

When he was 15 his mother left the family, his father could no longer support his seven children on his meagre wages as a day labourer in the Eastern Visayas, one of the Philippines' poorest regions, and Arcones had to quit school and work.

"I was very sad to leave school but my family is so poor that I had no choice," the skinny 21-year-old said outside the small wooden house he shares with his brother in Cambayan village, a hamlet in the Basey district of Samar island.

Arcones became one of the estimated 5.5 million children aged 5 to 17 in the Philippines who work - nearly 20 percent of the country's youth.

Almost three million of them work in hazardous jobs, mostly in mining, agriculture and sex work, while the rest help out on family-owned farms or do light work that does not harm their health or disrupt their education.

Demand for child labour is high across Asia, the world's fastest growing economic region. Almost half the world's 168 million child labourers are in the Asia-Pacific region, according to the International Labour Organization.

FROM LIGHT WORK TO HARD LABOUR

Arcones first worked as a domestic helper in a nearby city, before moving to the capital Manila where higher wages in a factory meant he could send more money home to his family.

But long hours and big city life were hard for the shy country boy. He returned home to his village where good jobs were scarce, so he took whatever work he could find.

"The work was really, really hard. I worked long hours and carried heavy sacks of rice and timber pieces from the mountains," he said. "But I couldn't give up. I had to work so my younger siblings could go to school."

He shows the large scar on his stomach - the result of surgery for a hernia he developed because of the heavy lifting.

Jobs became even scarcer after Typhoon Haiyan devastated the Eastern Visayas in 2013, prompting Arcones to accept help from aid agency Terre des Hommes, which works in the region to encourage children to go back to school.

He has been back in secondary school since June last year, with financial support from Terre des Hommes.

"I get teased a lot because I'm so 'old' but I don't mind, I'm so happy to be back in school and this time I will stay because I want a better life," he beams.

He has become a youth representative on his village council and is keen to spread the word to children about the benefits of continuing school beyond elementary level.

Aid workers and teachers say sending children to work is a way of life in many of the Philippines' rural areas, which despite robust overall economic growth remain mired in poverty.

More than 45 percent of people in the Eastern Visayas are poor compared with 25 percent nationwide, according to the World Bank.

"Poverty is the main reason why many children leave school," said Donabelle Abalo, a local project manager at Terre des Hommes. "But it's also part of the culture. Many parents don't value education because they didn't finish school themselves."

Even though education is free, many children do not attend school because the cost of books, uniforms, meals and transport is prohibitive for their families.

"It's hard work because we have few resources here," said Gadil, who covers 30 communities in the district with just one colleague. "We have a lot of convincing to do because many children go to school hungry, so they'd rather drop out and work."

In the nearby Simeon Ocdol high school, which was badly damaged by Typhoon Haiyan, headteacher Maria Teresa Refugio said staff work hard at trying to persuade parents to send their children to school.

"Luckily, we have few dropouts. But it's a continuous process of reaching out and convincing parents, so that attitudes change," she said.

Before Typhoon Haiyan many children were already working in agriculture but the loss of family income after the disaster has pushed more into hazardous work, Abalo said.

The government, concerned about the rising number of children being trafficked for labour after Haiyan, stepped up efforts to root out the worst forms of child labour, with access to education a key plank of its strategy.

But a 2014 U.S. government report on the worst forms of child labour in the Philippines said that, though Manila had almost doubled the number of labour law compliance officers, enforcement remained challenging due to the limited number of inspectors and lack of resources for inspections.