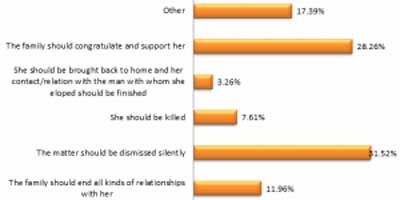 Image from survey by Aware Girls and Young Feminists Movement in collaboration with Mama Cash.

Domestic Abuse: A Recognized Yet 'Permissible' Act of Violence Against Women

Findings of a survey on the Perceptions and Attitude of People Towards Domestic Abuse in Pakistan.

Needless to mention that the police force rarely bothers to report the domestic abuse cases, and no action is taken. The societal and structural apathy have caused the victim to be in a difficult position, if she wishes to find a secure place to get refuge.

The findings of a recent survey revealed that 92.39% respondents answered in the affirmative that the country should develop specific laws against domestic abuse; however, 7.61% respondents were not in favor of any such legislation.

The survey on the Perceptions and Attitudes of People Towards Domestic Abuse in Pakistan was conducted by Aware Girls and Young Feminists Movement in collaboration with Mamacash. Aware Girls is a Peshawar-based national organization came into being, more than a decade ago, with a strategic vision to empower young women by ensuring their fundamental rights – including the right to live without any fear of violence, education, health, employment, participation, and resources.

The data for the survey was collected electronically as the audience consisted of those who have access to social media. The findings of the survey will help the organization in designing social media campaigns for addressing the issue of violence against women through sensitization, awareness raising and educational activities.

Abuse as a Punishment

The denial from a substantial percentage of respondents, 20.65%, clearly shows that even educated users of social media need sensitization and awareness to understand the gravity of violence for our women.

It is absolutely beyond any logic that husbands have the right to beat their wives; however, the findings of the survey on the Perceptions and Attitude of People Towards Domestic Abuse in Pakistan revealed that 25% of the respondents allowed it sometimes, while 10.87% don’t even put any bar against it and allowed it, whenever husbands wish to do so.

Fortunately, 64.13 respondents understood the heinous nature of the act and didn’t allow the husbands to beat their wives.

One must be astonished to know that mere disobedience could permit the husbands to either physically or verbally their wives as 52.17% respondents permit to do so if she disobeys the husband, while 14.13% allow if she disobeys her mother/father-in-law.

Non-availability of food on time, 3.26%, and refusal to sex, 9.78%, are also the acts that permit husbands to abuse their wives, according to the findings of the survey. The other permissible acts of violence include if the wife doesn’t take care of children 26.09%; if she threatens to leave home 9.78%; and 5.43% mentioned if she has illicit relationship with any other man.

It is relevant to mention that 14.13% respondents stated that men shouldn’t be allowed to beat their wives or shout at them in any case.

The Law of the Land vs. Societal Attitudes

In Pakistan, the law of the land allows every person, either male or female, to approach the court of law to get justice, if required; however, in case of domestic abuse, 7.61% respondents don’t think that women have any such right of seeking legal support, 32.61% respondents only allow the women to exercise this basic right if the issue is 'very serious'. However, 59.78% respondents consider legal support as a basic right for women.

While replying to a question as to whether men who beat or verbally abuse their wives or sisters should be punished by the justice system, 9.78% responded in the negative. 21.17% respondents believed that the matter should be resolved within the family as approaching the court of law tarnishes the honour of the family. 5.43% responded that physical or verbal abuse of women is an issue of low significance therefore women should make compromises. However, 61.96% responded in the affirmative allowing that any such person should get punished by the court of law.

When a Woman Runs Away to Elope

The survey asked an interesting question to the audience: what should be done to a woman who runs away from home (elopes) to marry someone?

It was really shocking that 7.61% respondents suggested that she should be killed. It is important to mention that such feudal mindset is more prevalent in rural areas of the country and one may not expect such a response from the educated respondents from social media.

An overwhelming 80.43% of the participants of the survey respondents said that the government should build more shelters for the victims of domestic abuse or those who feel insecure in their homes.

It is interesting that 13.04% respondents opined that availability of too many shelter homes may encourage the majority of girls to leave their homes and therefore, any such intervention can seriously harm the basic fabric of the society. 6.42% respondents were not in favor of any shelter homes for women victims of domestic violence.

The aforementioned findings reveal the need of a right-based education campaign among the literate girls and women living in relatively developed parts of our country.

It is no surprise to see some of the responses like accepting verbal abuse or beating or even death as just in a distinctly male dominated society. It would be even more interesting to replicate the survey in some of less privileged areas of the country, where the concept of obedience and male superiority is more deeply ingrained.

The survey on the Perceptions and Attitude of People Towards Domestic Abuse in Pakistan proposed a set of recommendations for providing services and relief to the women victims of domestic abuse.

It is suggested that silence around violence against women should be discouraged; gender-based violence should be eliminated in all forms; legal and shelter help should be available to the victims of domestic abuse; helplines and referral networks should be established to provide support to women in despair; more awareness on gender justice and human rights norms, and, consistent and coordinated efforts for strict implementation of national, international, and UN Protocols and Conventions on protection of women from violence and discrimination.

'The survey was conducted using social media so most of the people who responded to the survey were followers of Aware Girls.

We conducted the survey using survey monkey (free application) so we could get graphs only for 100 responses.

The people in Pakistan who saw the survey believe that the situation is much more worse in Pakistan and if it is conducted in community then we will get more horrible figures.'