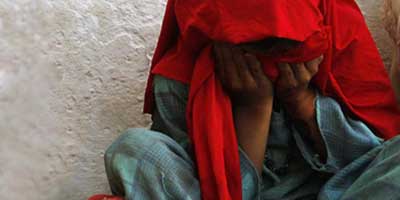 Strict yet victim-friendly legal mechanisms are required to minimize sexual violence against women and children.

The brutal rape of a five-year-old girl in Lahore last week has literally shocked the country, from the officials in the highest office down to the ordinary citizen in the street.

The tragic incident has sparked a nationwide debate and outcry against the lack of a safety mechanism in the country for women and children.

Certainly, women and child molestation cases are nothing exceptional in this part of the world; however, the coverage of the recent rape in Lahore in the electronic media and social networking websites has forced the concerned police officials to take immediate action.

According to reports the five-year-old girl was found unconscious and in critical condition near a crowded hospital in Lahore. Later, a medical examination confirmed that the victim had been raped.

The Punjab provincial law minister, while talking to the reporters stated that, "Those who have done this are not humans but beasts and will be arrested and prosecuted under the law and given exemplary punishments."

One can only hope that police will arrest the culprit or culprits of this heinous crime as soon as possible and that the presiding court of law will award the severest possible punishment to them so that it could serve as an example to other, like-minded perverts. This is desperately required in order to minimize the incidence of sexual violence against women and children.

Violence against women and children is quite common in male dominated South Asian societies, including Pakistani society. The research reports of child-focused NGOs suggest that violence against children has increased significantly although a large number of cases go unreported.

It is also a fact that the majority of violent cases against children are not reported by the parents or other family members for various reasons, including the low rate of convictions against the accused.

For example, in 2002 Mukhtaran Mai was gang raped, allegedly on the orders of a village council in the southern Punjab village of Meerwala. The incident shocked the country and people from all walks of life, notably the media and civil society organizations, supported Mukhtaran Mai in her efforts to obtain justice. However, finding justice for rape victims can be a difficult task in the country. It is shameful that all the accused in Mukhtaran's case were acquitted due to insufficient evidence.

Rape victims are severely stigmatized in Pakistani society and it is extremely difficult for the victim or her family to make a report in a police station and a court of law. In many such cases families try to sweep the matter under the carpet to avoid further trauma for the victim.

An unfriendly policing structure, cumbersome legal system and the secondary status of women in society have made women and children, particularly girls, even as young as five years old, vulnerable to all sorts of physical and sexual violence. Therefore, the perpetrators of such heinous crimes have little or no fear of punishment and the frequency of rape and gang rape is increasing.

The recent Lahore case has brought the issue of sexual violence to the national agenda. For once the media, civil society organizations, government ministers, police officials and the judiciary are in agreement that the perpetrators must be arrested immediately, tried and given exemplary punishment.

It is absolutely high time to initiate a national debate on the issue and build strict, yet victim-friendly legal mechanisms to minimize sexual violence against women and children in the country.

NGOs, CBOs and other social welfare organisations should also design different risk reduction programs for women and children. Furthermore, rape prevention programs for men are an urgent need so as to involve them in campaigns to diminish the prevailing gender inequalities and gender based violence in the society.

About the Author: Amir Murtaza is a senior researcher, analyst and writer on social development issues, especially pertaining to women, youth and children. He can be reached at