For Malala to Get Justice, Every Woman in Pakistan Must Be Safe 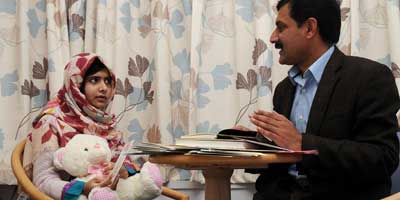 Malala Yousufzai with her father in hospital in Birmingham, UK.

By Josh Shahryar, Correspondent-at-Large for Safe World for Women

I wanted to write something about Malala Yousufzai earlier. It was maybe the first thought I had after the five stages of grief upon hearing of the brutal attack on her. I didn't. I wanted to wait and see what happened in the short-term before I delved into it.

Now, two months since the incident, the response by the government of Pakistan –  while encouraging, made me wonder.

Like many, I was heartened to see the government go out on a tear after the perpetrators of this heinous crime. I personally cheered for it in my heart, "Get those bastards! Find them wherever they hide. Don't leave a stone unturned."

While my wish hasn't been entirely granted, it seems the government and the security agencies in Pakistan actually did some work. They did arrest some of the perpetrators. They singled out the ones most responsible. And many –  including me – are hoping and praying that they will nab every last one of them.

We also hope and pray that they are brought to justice by being given a free and fair trial and sent to prison to serve out time for the crime they committed –  that their trial is publicized and laid bare, so that anyone who thinks of repeating such a crime knows the full consequences of the attack.

Too Many Travesties of Justice

However, as I was going through these emotions, I didn't just have Malala's innocent face before my eyes. I was thinking of countless other Pakistani women. Their faces, like those of Malala, haunt many, especially Pakistani women.

Faces like that of Mukhtaran Mai, who was brutally gang-raped in 2002 at the orders of a tribal council for a crime she had no hand in and who is yet to see any justice.

Farida Afridi RIP. Photo: Tribal NGOs ConsortiumFaces like that of Farida Afridi, a women's rights activist gunned down mercilessly for wanting to empower women in Pakistan's tribal regions just a few months ago. With those faces were the faces of countless Pakistani women who are victims of barbaric acid attacks and who live an existence of utter anguish, many without getting any justice.

There are too many names to name, too many shocking acts of violence to recount, and too many travesties of justice to bemoan.

Also Read: In Death, Farida Afridi Will Continue to Save and Better Lives

Every Woman and Girl Counts

While we are delighted that the Pakistani government is indeed doing something for Malala, we are all wondering why it won't do anything for every woman in Pakistan who is a victim of a brutal, often fatal, misogynistic attack. Clearly, if it can be so diligent and merciless in hunting down Malala's armed attackers, it could do the same for them, too?

And that answers a very important question that has been asked repeatedly since the attack on Malala.

A child gets brutally shot in the neck and head for simply wanting to go to school by a militant religious organization.

A child. For wanting to go to school.

How does something like this happen in this day and age? While the answer so far has been "the Taliban are barbarians," it masks a more sinister truth: the  Taliban aren't the only culprits.

This happened because the crime was committed in a society where misogyny –  horrible, depressing, violent misogyny –  often goes unnoticed, unabated and unpunished.

Her attackers felt that they could get away with shooting a little girl for wanting education. So they did it. Now, it's great that they won't get away with it, but the fact remains that the overwhelming majority of the perpetrators of such heinous crimes of violence against women remain free.

That violence against women – shocking violence  –  happens all too often has effectively desensitized not just large swathes of the population, but also the people that represent or claim to represent them in the government. It's fostered a society where any group or individual or militant organization believes that they can punish women whenever and whichever way they want.

Blaming the Taliban, going and capturing some militants who targeted Malala isn't going to change the reality that most women in Pakistan have to live with. The reality is that their lives mean less than men's –  far far less, and they can be targeted whenever, wherever, and by whomever.

And their attackers can and will get away with it more often than not.

I am still hopeful, though, even only if arrests of Malala's attackers is a first step – a step towards upping the ante against the perpetrators of violence misogynistic  attacks anywhere in the country.

I buy that at this point, it's hard for the government to dislodge the Taliban from the small piece of Pakistan they're running. It can, however, do something in the rest of the territory that it controls.

It can empower those forces inside Pakistan, the moderates, the media, the law enforcement agencies, and women's rights organization to fight anti-women bigotry and violence against women. It can create policies that ensure that women's rights are respected and enshrined –  not just in law, but when those laws are broken, the law-breakers get the punishment they deserve.

It needs to prioritize cases of violence against women in the court systems so justice is dealt with swiftly, to set clear examples.

In other words; it needs to put women's rights near the top of its agenda – especially their right to safety and security at home, at school, on the street, and at work. For Malala to get true justice, every woman in Pakistan must feel that they they're safe.

And if the government cannot provide that, then it can expect more attacks like the ones against Malala to take place.

Related Article: Why Malala? Some Answers