The Unseen, Unheard & Unaccounted for Disabled Children of Pakistan 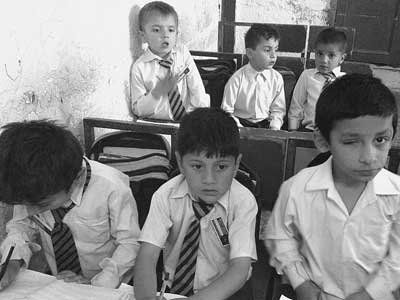 By Kulsoom Rizvi - on location in Pakistan, June 2013

Life for Pakistan’s children is a daily struggle; child rights advocates have called for more comprehensive legislation on the rights of children. Combating child marriages, child trafficking, child labour and improving health services and protection are on top of the list.

However, there is a lack of discussion on the rights of disabled and special needs children –  an unseen, unheard, and unaccounted for group in Pakistan.

On Peshawar Road, a trail of motorbikes buzzes through as sandal-clad children scurry in the middle of traffic. The long road leading to the tribal areas of north-east Pakistan is lined up with schools.

The classrooms are hot, flies settle on the faces of the children.  A group of 3 to 5 year-olds in one room attentively work on writing the English alphabet.

“What letter is this?” I ask one of the boys in Urdu.

“Can you tell me this letter?” I ask another boy. His name is Suban Ali. He looks at me blankly and turns to the boy next to him who smiles and tries to encourage Suban Ali to respond.

Suban Ali has been diagnosed with a learning disability. Sitting near him are boys with vision and hearing impairments. The one next to him is normal.

This classroom is mixed with disabled and non-disabled children.

Inclusion is Still a New Concept

Located in the town of Mehrabad, Hassan Academy is the only school in Rawalpindi, Pakistan, which provides inclusive education for both disabled and non-disabled children.

It was established in 1992, a period where education was ignored and neglected and the concept of an inclusive society was completely foreign.

“Times in Pakistan back then were horrible. Poverty dominated children’s issues, but there was no awareness of the disabled community and parents didn’t know.

The situation has improved now, however, the government’s role is lacking and it’s really hurting these children.”

Children with disabilities and special needs in Pakistan are amongst the most marginalized members of society.

Neglect, lack of awareness, social stigma, inadequate services and health care hover over their daily lives. Children are generally one of the most vulnerable groups in Pakistan, facing serious disadvantages in the realm of social and economic development.

Teacher Noreen Ali points to a photograph laminated on the corner of her desk. In the photo are three young boys, two who have a disability. They’re now both in their early 20s, one grew up as an orphan and is now running a factory. The other is studying in the Punjab region with top marks.

“Parents here question why their children have to be in a classroom with a disabled child. We tell them they're a gift from God. We tell them it’s here in the school where they will improve.”

"Critical mass hasn't built up and people are ashamed. Inclusion is still a new concept in Pakistan, but it is developing day by day. “

No Consensus, No Plan of Action

According to the most recent census, there are over three million people with disabilities which makes up 2.54 per cent of the population. Of the total population with disabilities, 0.82 million (24.8 percent) are of the school-going age, between 5-14 years-old.

Pakistan Society for the Rehabilitation of the Disabled (PSRD) in Lahore practices a kind of reverse inclusion where children without disabilities are also admitted and make up to 25 per cent of the student body.

Ghazala Hameed, vice president of PSRD, said there is some improvement in providing for the needs of children with disabilities and special needs. But most NGOs and welfare organizations are all concentrated in the big cities.

“Facilities are sorely lacking in rural areas. Pakistan has signed and ratified the Convention on the Rights of Persons with Disabilities, but apart from an increase in awareness about disability issues, there is no consensus about what needs to be done and no plan of action.”

Saima Bagi is a stay-at-home mom in Rawalpindi. Her son, Assan, has had speech problems since the age of 5.

Saima Bagi said she noticed a difference in her son’s speech after he began to take medication for his hyper-active behavior. Assan has been attending Hassan Academy for the last few years. The family is well off, owning small patches of farmland which pays the tuition and the extra help Assan needs.

But Saima Bagi is aware that not all families are as lucky.

She is active in the disabled community, visiting the slums in Rawalpindi and the country’s capital Islamabad, to educate and inform poorer families with disabled children who don’t have access to services.

Disabilities among children affect the socioeconomic standing of entire families, according to Raja Taimur Hassan, a consultant for the Sustainable Development Policy Institute. A number of children have no access to special education, health facilities and lack awareness about their rights in the constitution.

The majority of children in Pakistan never attend school, both disabled and non-disabled alike. This is largely due to lack of resources and inadequate infrastructure for special education.

Only 1.8 percent of the country’s GDP is used on the education sector.

Households with members with disabilities generally have lower incomes than other households and are at a significantly higher risk of living below the poverty line.

It is estimated that 66 percent of persons with disabilities live in rural areas; only 28 percent are literate; only 14 percent are in work and; 70 percent are reliant on family members for financial support, according to a study conducted by Sight Savers, an orgsanisation focused on the blind community in developing countries.

Pakistan’s Gini coefficient – or Gini Index,  a measure of inequality among values of   frequency distribution (such as levels of income) was 30.6 from 2007-2008; this represents the significant income disparity that exists in the country. Taxes on the poor in the last 10 years have increased by almost 35 per cent.

The national income in Pakistan is increasing each year, but the concentration of income is in the hands of the elite.  According to government figures, 20 percent of household income for the wealthy has been almost 7 percent higher than the poorest 20 percent households.

Shazad Amir is a 6-year-old boy diagnosed with down-syndrome. He gets free tuition at Hassan Academy. His mother passed away when he was just a baby and is now looked after by his father, Imran, who is currently unemployed.

Imran used to drive a fruit and vegetable wagon into the neighborhoods of Rawalpindi before getting into a motorbike accident. He depends on his family and makes a living begging on the street.

“I want to help my son. He is all I have and my only way to remember his mother. I feel ashamed to ask for money from strangers, but I do it for him.

The Pakistani government does not care about the poor and our children. I have to do everything alone, but I love my son.

PSRD Vice President Ghazala Hameed said there are families in Pakistan who consider children with disabilities as a drain on their resources, needing constant medical attention and care. Very often these children are neglected when it comes to allocating the family resources.

Sadia Mumtaz is a corporate lawyer and a disabilityrights advocate. She co-founded Inclusive Society, an organisation focused on early intervention and community based rehabilitation.

Her son Mohammed, was diagnosed with Fragile X syndrome, a predominately learning disability. When Mumtaz returned to Pakistan in 2010 from Germany, she went out seeking services to aid her son.

But she found none.

“Resources are now more available for families with disabled and special needs children, however, there is still a social stigma attached to this issue.

Families themselves are not advocates for their children. If you keep your child away from the outside world, then they won't be accepted.

It all starts with dialogue."

One of the communities Sadia Mumtaz’s organisation works in is the Macchar colony, an urban slum located in Karachi.

Macchar Colony has a high prevalence of disabilities. There is a population of 700,000 people from various ethnicities: Pashtun, Bengalis, Sindhis, Baloch, Mohajirs, Katchis, and Memons. Inter-marriage is common.

There is also a lack of a drainage infrastructure and a problem with indoor population, creating a breeding ground for mosquitoes and flies.

To begin discussing about disabilities, conversations must start from the ground up. Tackling the issue of disability rights from the start can be pointless in theory if a community has no foundation of human rights to begin with.

“Instead of saying let's solve disability rights, let's first work collectively to build knowledge in our unprivileged community. When you increase the knowledge level you will automatically bring awareness to human rights, equality and corruption.

Why single out disability rights, when a community isn’t even aware of general human rights?

You need to take a holistic approach because everything here is low.”

But it’s not just the community itself that need awareness. Pakistan as a whole lacks knowledge of disability rights. Mumtaz said this can be pointed to the media’s lack of coverage, but she understands why:

“There are multiple layers of problems in Pakistan, which shadow the disability community.”

Mainstream media prefer to stick with reporting the insecurities of religious minorities, and the country’s security itself deteriorating on a daily basis.

“They only report during awareness days. The media should play a significant role in highlighting social issues such as disability issues. The media claim to be the voice of the public and representing them at large.

But there is no interest in social issues.”

“I think there is a general lack of importance given to such stories to begin with. I think as journalists we could highlight how a disability affects a person in regards to their progress, it could help create possible solutions for them and make it more relevant to the society at large.

But none of this goes without saying that the media has grown more sensitive and perhaps will require more time to integrate such issues at a larger scale.”

Ghazala Hameed adds there is still a negative perception of disabled and special needs children in Pakistan, which should be tackled by all stakeholders including family, community and society.

Kulsoom Rizvi is a Pakistani/American journalist based in the UK. She specialises in humanitarian issues and has a passion for children’s rights and child refugees.