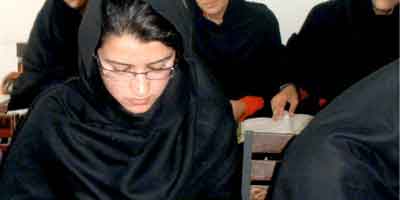 Kainat Riaz, one of the two other girls injured in the attack on Malala, has returned to school. Photo: Express Tribune

SWAT: Despite suffering the trauma of being shot at, Kainat Riaz, one of the two other girls injured in the attack on child activist Malala Yousafzai, was excited about returning to school on Saturday.

However, having come into the spotlight following the harrowing incident, the 16-year-old is unable to get any van driver to take her to school now.

Nonetheless, having travelled to school in a taxi, Kainat received a warm welcome from teachers and fellow students when doctors allowed her return after 25 days of treatment and bed rest.

“I was feeling really bored out of school. At first, I did not feel it and my attention was on my wound – but as time wore on, I got bored and wanted to come to school. I was really missing my school,” the 16-year-old told The Express Tribune.

One would expect the teenager to be deeply shaken – but, on the contrary, Kainat said: “I am more serious about pursuing higher education after the incident … Women make up half of our society and we have to get modern education within our social and Islamic values.” She added that she was hopeful of Malala’s recovery and was awaiting her return to school.

Kainat also thanked the media, saying “At first, we were ignored… but we received attention after the timely intervention of the media. Shazia is also recovering fast and will be back soon.”

Her only concern, she disclosed, was finding transportation for school. “My father asked five different school vehicle owners but all of them are not ready to let me be a passenger because of the risk factor. Now, I come to school in a taxi,” she added.

Maryam Khalique, the principal of the school in which Kainat studies, said she was glad to have Kainat back because she feared the victims wouldn’t be allowed to return to school after the Taliban attack. She added that both the injured girls would now receive free education.

Malala’s father, Ziauddin Yousafzai, told The Express Tribune via telephone that Malala’s condition had greatly improved and she could now walk and talk. “This all became possible because of the limitless prayers and wishes of the national and international community and I have no words to express my gratitude to all these people for standing by us during this hard time,” he said.

Related Article: "Our Daughter Stands for Peace and Education"