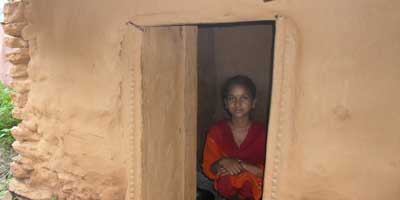 Kamala Vishwarkarmas sits inside her goth, where she has been staying alone during the week of her monthly period. 'Chhaupadi’, the Nepalese practice of segregating menstruating women from their houses and men, was outlawed by Nepal's supreme court in 2005

Every month, for one week,14-year-old Kamala Vishwarkarmas returns from school to sleep alone in a dark, windowless mud hut. She is forbidden from entering her family's house during her menstrual cycle for fear of what might happen.

“I'll stay here in the 'goth' for seven days total,” Kamala said. “Of course I feel afraid when I go inside by myself. It's so scary during the rainy season when all the snakes come.”

'Chhaupadi', Nepalese for the practice of segregating menstruating women from their houses and men, was outlawed by Nepal's supreme court in 2005. But locals say the practice is only now beginning to wane in the western region of Nepal, the only part of the country where the tradition is observed.

A three-year-old initiative in Achham District to create 'chhaupadi'-free zones is slowly catching on, but remains stalled by a division between younger and older generations: the latter warn of disastrous consequences if menstruating women, considered toxic, step inside their houses.

The Hindu gods will punish menstruating women, their family, land and livestock in any number of catastrophic ways if they try to contaminate their homes, they believe.

But many young women like Kamala do not believe in such things.

Kamala has asked to come inside before, but the family elders get angry, she said. Her aunt, Vima Vishwakarmas, who takes care of the grade-nine student, quietly supports her niece's convictions.

“I wish now that she could come inside, but the older family members won't allow it,” Vima said.

Kamala spoke of her own cycle without any indication of embarrassment inside her austere 'goth', furnished with a thin mat, a metal plate and bowl on the ground.

Women practising 'chhaupadi' have reported rapes, snake bites and a lack of nutrition because they are not allowed to cook for themselves or eat dairy products, according to a local women-run advocacy organization called the Paralegal Committee. The group launched the 'chhaupadi'-free movement three years ago.

Tula Shahi, a local restaurant owner and health expert contracted by the government, sat in on the Paralegal meeting. She recalled how she once did not eat for seven days while in the 'goth' because there was no one to cook for her. Now she, like all of the Paralegal members, no longer uses a `goth’.

A group of children outside a communal 'goth' | Photo: Amy Lieberman/IRIN “Women and children aren't eating properly, and because it is cold inside the 'goth' they can become sick easily,” said Namsar Vhandari, the Paralegal Committee's secretary.

“In part because of this, we started to work with families and to convince them to let girls come inside the house. Of course it is difficult. We talked a lot about what people are afraid of, especially with the gods and the goddesses.”

Vhandari said after three years, 75 percent of her Village Development Committee (VDC), a municipality called Janalibandali, is 'chhaupadi'-free, but the remaining 25 percent remains “quite far off”.

Mangalsen VDC, a small town of less than 10,000 and capital of Achham District, presents a mixed picture of progress.

Chandra Khadka, a male spiritual healer who lives more than an hour from Mangalsen, began encouraging girls to leave the 'goth' two years ago. “I wanted to become a part of society, so whatever society decides, I am following that,” the 68-year-old said of his decision to keep pace with the anti-'chhaupadi' trend in Achham.

But bucking tradition can create ruinous consequences for women who independently shun the 'goth'.

After seven years of practising 'chhaupadi', Lakshmi Regma refused to stay in the `goth’ after she was selected as a village facilitator, a community mobilizer funded by the government. But when her three-month-old son later died of natural causes, people began to talk about her role in his death.

“People said he died because I didn't go in the 'goth',” Regma said. “If something happens to your family, people will blame the girl." Adding that such pressure and superstition puts an unreasonable burden on girls.

Even though she is head of the household, Nirmala Nepali, 14, is not taking any chances with crossing the elders in her Dalit community. Nepali has cared for her two younger siblings for the past seven years since her mother died of AIDS, but she still listens to an elder neighbour, who instructed her when she had her first period five months ago.

“If I go inside, the grandmother will become crazy,” Nepali said from outside her 'goth'. “So I stay here.”

In a dusty courtyard in southeastern Nepal, around a dozen women in matching blue saris sit cross-legged and discuss their neighbours.

"I heard that a landowner beat an 11-year-old boy just because he suspected the child of letting his animals escape from their field," says one.

"In my village, there is a Muslim man who wants to take a second wife," says another, while a third tells the story of a 13-year-old girl whose father is rumoured to be planning to sell her to a man from neighbouring India.

To the outsider, these stories might sound like mere village gossip. In fact, they are part of a groundbreaking effort to deliver justice in Nepal, where law enforcement is weak at best, and non-existent at worst.

Since 1999, women in many parts of the impoverished Himalayan nation have been meeting every month to fight back against the discrimination and abuses they and other marginalised groups have been subjected to for centuries.

Known as paralegal committees, they were first set up in 1999 as part of an anti-trafficking programme run by the UN children's agency, UNICEF.

Since then they have expanded their remit to include many other forms of abuse, with a focus on issues the authorities have tended to turn a blind eye to, such as child marriage and domestic violence.

There are now 644 paralegal committees working in the 23 districts of Nepal where UNICEF is active, and the UN agency has plans to expand the scheme to cover all 75 districts by 2013.

The members are given basic legal training covering a wide spectrum of issues, from trafficking and sexual harassment to property laws and the rights of divorced women.