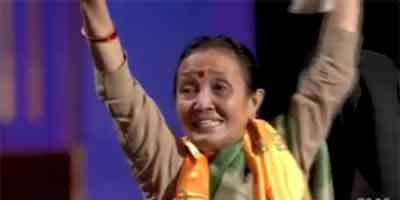 “First you have to learn to take them as your own child. Then you will feel the sorrow and then the strength comes out from you to protect them.”

Anuradha Koirala is the Founder and Executive Director of Maiti Nepal.

Born in Nepal and former English teacher, Ms. Koirala started Maiti Nepal in a small house in Kathmandu with her own savings.

Today she is a widely recognized activist and lecturer who has dedicated her life to combating the sexual exploitation of women and children.

This year she was appointed CNN 'Hero of the Year'

Q: What gave you the idea for the story?

I`ve had a lot of frustration with how long it takes to intervene.....or understand what`s happening within a conflict.

How did Maiti Nepal come into existence?

The problem of trafficking is not a modern problem in Nepal.

After democracy was established in 1990, people did start talking about trafficking and domestic violence. But the talks were not translated into actions, and this frustrated me.

With my own income as a school teacher, I helped eight women open small shops. These women were victims of domestic violence and were forced to beg because no one would give them work.

Eventually the network grew and UNICEF decided to support us. Then with a group of 210, comprising students, jounalists, lawyers, nurses and policemen, we started an awareness campaign in seven villages that were most vulnerable to trafficking. That's how Maiti Nepal started.

Having worked in this area for 17 years, have you noticed changes?

Nepal, ranked as a Tier 2 country in the U.S. State Department's Trafficking in Persons Report, is the land of opportunity for sex traffickers, who have little trouble convincing poor, often rural families to hand over their daughters. The menace of trafficking has been a serious problem in Nepal for several years. During the 1990s domestic violence and trafficking was at its peak.

In a lot of cases, the family is acquainted with the trafficker, who will promise a great job for the girl, which translates to a better life for her, as well as money sent home to the family. Instead, she is stolen away and passed off to a brothel, where she'll be isolated from the world and forced to pay off new debts through sex with innumerable clients.

According to a report by the US State Department, about 12,000-15,000 women and young children are trafficked to India over the porous boundary every year.

First of all, trafficking exists as an issue in the public eye.

The attitude towards trafficking and its victims has changed; the police are more sensitive during interrogations. Policymakers consider this a crucial issue and even though there is much to do on the implementation part, political parties have at least included combating trafficking as part of their agenda. The government has endorsed September as anti-trafficking day.

Another important change is that now, traffickers are convicted; Maiti Nepal alone has helped convict 496 traffickers. The judiciary hands down verdicts quicker now, which has made conviction an easier task. The source areas for trafficking have also changed because the level of awareness has risen.

The parents of the girls have always been happy to welcome their daughters back home.

When it comes to society, it has nothing to say if the girl is economically empowered. Which is why we value the training we give to these girls so that they can earn a living.

Have there been changes policy-wise? What changes are necessary?

There haven't been significant policy changes, partly because we haven't had a stable government in years.

Trafficking takes place because of lack of education and employment opportunities, and gender disparity.

Education is still not free in the villages and as a parent one sees more value in educating the son rather than the daughter. The government has to make education free and compulsory,

The government also needs to open shelter homes. As an organisation we can do little, but the government has a wide reach and capacity.

Will this award make a difference?

International help like this will pressurise people here to further work in this field.

What is Maiti Nepal's ultimate aim?

My wish is to close Maiti Nepal as soon as possible because it will mean that trafficking has been completely eradicated in Nepal.

It is shameful that Nepal is party to one of the top three crimes in the world. The day I can close down Maiti Nepal will be my happiest day.