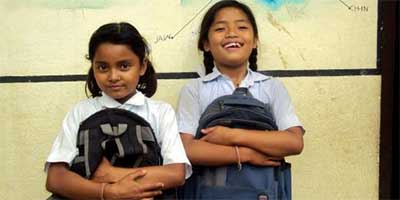 Domestic workers Manisha and Asmita cherish their time at school each day.

In exchange for school fees, girls from rural areas in Nepal say they suffer abuse while working as domestic laborers.

Government officials say initiatives have reduced child labor by 40 percent but acknowledge the need for economic empowerment of families to eradicate it.

Anupa Gurung, 12, sits at the back of her classroom in Kathmandu, Nepal’s capital, and listens attentively to her teacher. Unlike her friends, who are eager to finish the class and return home, Anupa becomes sad when the bell rings to announce the end of the school day.

That is when she must resume her duties as a domestic laborer.

“I feel like the 4-o’clock bell at the school should never ring. As I reach home, I have to put away my books and start cleaning the dishes. I do not know whether I [will] get any food.”

Anupa moved to Kathmandu three years ago from a village in eastern Nepal, 500 miles away.

Anupa says she was living happily with her family back home, but she wasn’t receiving an education because there was no school in her village. The older girls in her neighborhood advised her mother to send her daughter to Kathmandu, where she would get the chance to go to school if she worked as a baby sitter for a family in the city.

Anupa, 9 at the time, didn’t know where Kathmandu was, but she had experience taking care of her siblings and thought she would be able to manage her studies with her work. With this hope, she left with a neighbor for Kathmandu.

It was difficult for her to leave her family, she says, but she was excited to see large buildings, vehicles and the bustle of the city. Then her neighbor handed her over to a woman who owned a four-story building and told her that if she did everything she asked her to, she would get an opportunity to attend school.

There were eight people in her new “family.” Her employer ordered her to baby-sit the 4-year-old son, sweep the floor, wash clothes, clean the toilet, carry bags home from the market and prepare vegetables for meals. For her own meals, she says she receives stale leftovers.

“If there are no leftovers, I won’t have anything to eat,” she says.

Her day starts at 5 a.m and ends at 10 p.m. when she finishes all her chores and puts the employer’s son to bed. After that, she starts her homework, finishing around midnight. She sleeps on the kitchen table using a sack as a pillow.

Whenever she asks for school workbooks, returns late from school, drops a utensil or the employer’s son misbehaves, the older daughters of her employer beat her behind the closed door of the storeroom.

“I get hurt while being beaten,” Anupa says. “I sit and cry alone. Nobody comes to console me.”

She hasn’t seen her family in years.

“I have not set foot on my home since I came to Kathmandu, nor has any one of my family members come to visit me,” she says. “I think I have forgotten the home.”

So school has become her oasis. The second-grader says she loves her classmates and teachers and is happy that she is getting the chance to study.

“Since that I am already here, I can at least go to school despite the trying works,” Anupa says.

But thinking about the work and abuse she must bear in her employer’s home makes the close of the school day sad.

“I feel like the 4-o’clock bell at the school should never ring,” Anupa says.

Parents unable to educate their children in rural areas often send their daughters to work as domestic help in return for schooling. But girls complain of mistreatment and an inability to concentrate on school, if employers permit them to attend at all. Experts cite poverty, political instability and a lack of awareness about child labor as root causes. Although laws here forbid child labor and government officials say a national plan has helped halve the number of child laborers, activists say that eradication requires a vigilant society and economic empowerment of the poor.

Approximately 1.5 million children under 16 are engaged in income-generating activities in Nepal, according to the Rapid Assessment Report 2012, a recent update of the Ministry of Labour and Employment’s last study conducted in 1998.

Ffity-seven percent of the 313 domestic child laborers identified in a 2012 sampling of 10 districts, including Kathmandu, were girls, says Krishna Prasad Dawadi, undersecretary for the Ministry of Labour and Employment.

A 14-year-old girl born in a remote village in Dhading district, west of Kathmandu, is also working as a domestic helper. Her name is withheld to protect her identity.

Her parents, who earn a living as farmers, couldn’t afford to send their five children to school. So when she was 8, her father brought her to Kathmandu, where her sister was already working as a domestic helper and studying. Her father left her with an employer who promised to send her to school in return for housework.

She could only speak the Tamang language of her village, so she immediately struggled to settle in at the new house, where the family spoke Nepali.

At the age of 8, she was responsible for cleaning crockery and clothes, cooking and escorting the employer’s children to school.

She says her employer used to beat her if she didn’t do her work properly or if she woke up late in the morning. Her employer would not allow her to use their telephone, so she remained out of touch with her family for two years.

Despite their original agreement and her performance of all household chores, her employers did not enroll her in school. Finally, when the girl’s older sisters threatened to take her back home, the employer enrolled her in a nearby government school.

To work for the family of six, she had to wake up at 4:30 a.m. to start her chores yet was still always late for school. She had to return home on her lunch break to prepare afternoon snacks for the family. After school, she finished her chores at 10 p.m., then spread a carpet on the kitchen floor to sleep at 11 p.m.

She says she ate only stale food.

“Even the employer’s relatives [brought] stale food packed in a plastic bag for me and for the dog,” she says.

Fed up with her employer, she moved to a new house to work in October 2011 with the help of sympathetic neighbors.

“The workload in the new house is the same,” she says. “But there, at least I have my own room with a bed and quilt.”

Although her current employers scold her when the food doesn’t taste right or if the crockery is greasy, she is happy that they don’t beat her.

“The new employers are better than the people I lived with before,” she says. “I do not get sad even if I get scolded sometimes.”

And she says she is happy to be receiving an education.

“I am living in somebody else’s house hoping that I will have a better future,” she says.

As both governmental and nongovernmental agencies raise their voices against child labor, the trend to send these child workers to school has increased, says Tarak Dhital, spokesman for Child Workers in Nepal Concerned Centre, a leading nongovernmental child rights advocacy agency. But in most cases, employers enroll children in the schools but don’t send them regularly. They also neglect to provide them with the necessary books, copies of exercises, school uniforms or time to study.

The 14-year-old from Dhading is enrolled in Shree Guheshwori Bal Shikshya Higher Secondary School. Of the 450 students in the school, 75 percent are domestic child workers and 60 percent of the girls work as child laborers, says Dhruba Dhakal, principal of the school.

Although the children are enrolled in the school, their employers do not pay admission fees or purchase books on time, the principal says.

“There is no guardianship,” he says. “Such children cannot concentrate in their studies due to tensions in their homes.”

Political instability, lack of awareness and poverty are the reasons that force these children into labor, Dhital says.

One out of every five households in Kathmandu has a domestic child worker, he says. Employers prefer to hire children because they can pay less for their work, can easily control them and can lure them with the opportunity of education. Children have reported cases of severe violence, such as having hot food thrown on them, being burned with a hot iron or being taken advantage of sexually.

“Political, economic and social power has harbored child labor,” says Dhital, explaining that people with political power and social influence want to perpetuate domestic child labor for their own comfort.

Laxmi Tripathi, the undersecretary of the Ministry of Women, Children and Social Welfare, cites poverty as the main reason for child labor.

“Unless poverty is eradicated, it is difficult to control child labor,” Tripathi says.

The 2007 Interim Constitution of Nepal prohibits all forms of child labor, Tripathi says. The Children’s Act of 1992 and Article 3 of the Child Labour (Prohibition and Regulation) Act of 2000 also prohibit any action that threatens or lures children below a certain age into labor. But the minimum age for child labor varies among Nepali laws between 14 and 16 years.

Despite these laws, Nepal has not been able to uproot the worst forms of child labor from society because of a lack of firm commitment by the government, Dhital says.

“Although domestic child labor is prohibited by the law, children from rural areas and from families with low economic conditions are lured with opportunities for relief and protection,” Dhital says.

But instead, these children are subject to labor exploitation, violence, undernourishment, malnutrition and health hazards.

“Making laws is not sufficient,” Dhital says. “Enforcement and monitoring should be effective.”

He says this requires a community-wide effort.

“The society has silently accepted child labor, which makes it a huge problem,” Dhital says.

The Child Workers in Nepal Concerned Centre has been rescuing and protecting child laborers, Dhital says.

Tripathi says the Ministry of Women, Children and Social Welfare has formed a District Children Labour Coordination Committee for each of the 75 districts of Nepal to enforce and to monitor children’s activities.

The National Master Plan on Child Labour aims to eliminate the worst forms of child labor by 2016, Dawadi says. The plan supports the committees, initiates awareness activities, encourages families in low-income areas to send their children to school and promotes enforcement of the law.

“The government is doing its work,” he says. “People are gradually made aware, which has brought about positive results.”

Nearly 2.5 million children were engaged in income-generating activities in 1998, according to a Ministry of Labour and Employment study. The ministry’s 2012 Rapid Assessment Report showed the number had decreased to 1.5 million, Tripathi says.

Domestic child labor is difficult to curb because it happens inside the closed doors of a house, Tripathi says. He adds that elimination of child labor is impossible unless the government addresses the needs of the poorest of the poor.

Dhital agrees the government should focus on the economic empowerment of the poor by creating employment opportunities.

“Even though children are rescued from labor and returned to their families,” he says, “after some time, they go back again to work as labor.”

Meanwhile, the young domestic workers do what they can to attain an education.

The 14-year-old domestic worker from Dhading dreams of becoming a science teacher so that she can educate others.

“I want to study,” she says. “I fear I will be pulled out of the school at any time.”

Anupa says she will endure the abuse as long as she can continue in second grade.

“I get accused for the things that I didn’t do and also get beaten for it,” Anupa says. “What can I do? That is my fate.”