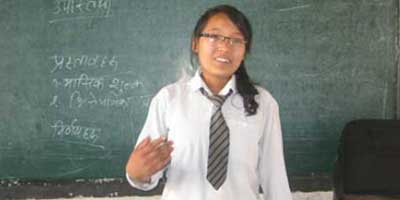 Students Engage in Intense Training Through Discussion and Creativity

Gender Equality is a pilot project supported by DKA Austria, and carried out by Rural Women’s Network Nepal (RUWON).  This pilot project has been running since 1st November, 2011 and will continue until 31st October, 2012.

All 16 different schools are located in Kathmandu Valley. By forming children's clubs,  children are given an opportunity to discuss and work with the objectives of the program. The leaders of each club will be strong through the various trainings and programs.

We could not do all the activities in the proper time frame because of the political situation of Nepal.  Nepali politics is not sustainable. Each year the prime ministry changes – there are a lot of strikes, so schools will be closed;  sometimes RUWON cannot do every activity according to plans.

But as a whole, though it took time, the activities were a success due the great effort and cooperation of the children.

During the project period, all the children were very excited and had built up their inner capacity by expressing their thoughts. Children did not hesitate to talk and share their feelings, which has helped them to be good leaders. Within the project we did many activities which have lead the children to be positive and more creative.

We followed our intended proposal: we provided the various trainings on various topics like children's rights, democracy, leadership, gender equality and so on. The publication of the training manual has added to the excitement between the children and it has helped the children in learning how to compose the formal meeting and the information about democracy, gender equality, leadership, child rights, and gender discrimination and so on.

Due to the excitement and interest of the children, the project gained more success  as each activity was completed.

In the future,, we will be continuing the project, working with 16 children's clubs along with Inter-school children's club in 16 different government schools in Kathmandu. We will be changing the leaders in each academic period. We will follow the project by organizing various activities which will help children to go ahead in life.

The children will follow the training manual which will help them to compose a formal meeting and help them be creative, active, and  good leaders. It will also help the children to respect each other, seek their rights by talking about it, and  no longer tolerate gender discrimination. 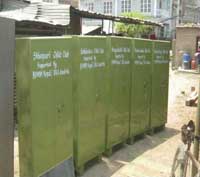 Delivery of new cupboardsRUWON Nepal followed the various activities like training, distributing cupboards and wall board, publishing tri-monthly and training manual which benefited the children who are the member of child club and indirectly to those children who are in touch with the club members.

Due to the various trainings and children's club support activities, children got ahead as  good leaders. They were open and shared their feelings and experiences which is their rights.

The training on gender equality made them aware about gender discrimination. Similarly, training on children's rights encouraged them to seek their rights. As the main objective of the project has been to motivate the domestic workers as well as encourage them to be a leader in the children's clubs, the trainings were effective to touch upon the objective.

The training ran on the following topics: 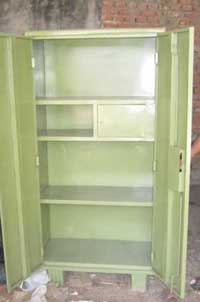 The children are excited about their new cupboardsRUWON Nepal distributed 16 cupboards to 16 children's clubs, on the 4th and 5th June.

In response to receiving the cupboards, children were very much happy and excited. The grey cupboard is  33 inches width and the length is 5 ½ feet, and has four boxes with four  levels. The third box is separate where they can keep money; it has a lock system, too.

Publication and Launching of Training Manual

On Friday, 15 June 2012, RUWON Nepal launched its training manual which is an effective means for the children's club to get ahead.  The venue of Launching Ceremony was in Baal Babasayai Ma. Vi, Sifal at 2 pm. In the ceremony Joey Owen was invited as the chief guest.  She did the act of launching and explained how important the manual is for all children's clubs. All the children's club leaders were present in the ceremony. 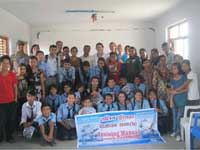 RUWON Nepal organised various programs for the intellectual and psychological development of the children in all 16 different children's clubs. We got all the students much more interested and active to participate. We organized the training and the orientation classes for the good leadership and the children's rights  so that they can be good leaders and empowered.

The program started at 12 noon and was finished at 3pm. In the competition, Sujata Rijal was invited as the chief guest.  Hira Maya Awal, President of RUWON Nepal and Therese  – a volunteer from Sweden, were invited as the guests.

The invited chief guest and the guests encouraged the participants to keep it up and go ahead in life. As a whole, the program was very interesting and all the members were very much excited.

Distribution of wall board for new five schools

We distributed the wall board for new five schools:

RUWON Nepal worked with the theatre group named Space Nepal. The workshop had been running for seven weeks (28 June 2012 – 27 July 2012). The project was supported by the Erach & Roshan Sadri Fondation (ERSF) and the project was jointly organized by RUWON Nepal, Freedom To Learn (UK), and Space Nepal.

The project was launched for the theme 'Theatre for better education'. In the workshop, children from five different government schools (20 from each)  participated. The schools are:

There was a performance about the problems students face; afterwards, teachers, parents, and the students of three organizations discussed solutions to the problems discussed during the play..

All the children were given stationery items along with bags, which RUWON Nepal distributed to a total of 105 students.

It is really challenging to work with the children by forming the children's group. As most of the children are domestic workers, they don't have time to participate in clubs; they need to manage their time during the school period.

The children are domestic workers – their real homes are in villages.  Now they are working in others' houses here in Kathmandu. They help to cook, clean and wash the clothes.

For a single programme, we had waited for many days for the management of their time. But due to the excitement of the children, they could manage time during their break time. We have done most of the activities during the break time and before or after school.

It is the great achievement that we could be the part of their lives, as they trusted us and took out time for us.

We had problems while forming the new group in five different government schools because the teachers were not permitting us to carry out our project; it was all so because of the lack of understanding. But after our chat with them they were ready to form the club. We didn't stop convincing the schools until they were convinced. Finally we convinced them and formed five new groups.

Hence, it is clear that trying makes the work easy to do and is a path to success. All of our activities have affected our organization, as it has been the trustworthy teachers and students in those schools where we work who have helped make our project successful.