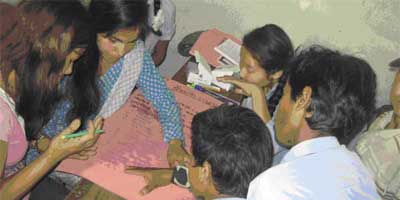 “I’m happy that I’ve got knowledge of composing formal meetings, gender equality, child rights, and the way of gathering with friends in friendly environment.”

The event was supported by the development cooperation agency, DKA Austria.

From each children's club the president, vice president, and general secretary participated. (For list of participating clubs, see below).

The training ran on the following topics:

Day One: How to Start a Formal Meeting

After that the trainer pointed out their mistakes and offered suggestions to them, he trained all the participants on how to compose a formal meeting. It was done

After that, the trainer chose one participant from each group and formed the next group. That new group was asked to run the formal meeting.

In that new group participants were :

All the children were very interested and excited. Their eagerness to learn and practice made the training quite short.

Two volunteers, Sara and Cornelia from Sweden, talking about gender equality28 April, 2012 : the second day of training started with the revision of the formal meeting format. Again, the trainer asked the participants to do the formal meeting according to the format from which they had prepared the previous day. He followed through with comments and suggestions.

Next, the training was led towards the topic of gender equality. Sara and Cornelia, two volunteers from Sweden, gave the training.

Trainer – Mrs. Bandana Kumari Shrestha, President of RUWON Nepa,l giving the training on children's rights.They first asked participants about the concept of gender equality, and then explained the concept.

The participants were very excited and held a discussion about the topic. Soham Shah, a 16 year-old boy from class 10, general secretary of the Nepal Child Club, and Bir Bahadhur Tamang, the president of Inter – child Club asked about the difference sbetween the issue of gender equality between Nepal and Sweden.

After lunch, there was a discussion on child rights.

Children performing on the topic of child rights through drama.The trainer, Bandana Kumari Shrestha, asked all the trainees, “What is child rights?” All the participants answered it, and the president of Inter – child club, Bir Bahadhur Tamang, was asked to summarize it. After the summarization of child rights by Tamang, the trainer talked about child rights and how to achieve them.

The trainees were very curious about the topic, so they had a discussion about it for a long time. Pawan, a 15 year-old boy from class 10 and the secretary of Bhanu Child Club, raised the question about the right of the child who gets an abortion before giving birth.

“I got the training, fulfilling my expectation. I learnt many things from the training.”
Sunita Chaulagain, President of Padmakanya Child Club

“I got chance to have the good relation with all friends from 16 different Child Clubs, and shared feelings and ideas.”
Karishma Chaudhary, President of Mahendra Rastriya Child Club

“I got a chance to learn new things which I didn’t have knowledge and ideas [before]. I think I learnt by enjoying in friendly environment.”
Baal Kumari Magar, Treasurer of Mahendra Bouddha / Rastriya

The 16 children's clubs who particpated were: