No Help for Nepal's Victims of Domestic Violence 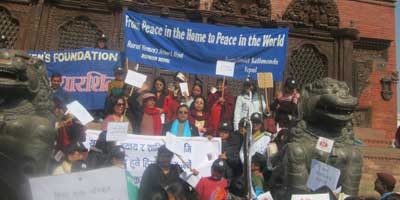 Domestic Violence Survivors are on their own

Today, in Nepal, there is no help for the survivors of domestic violence.

This means that in all of Nepal, there is no one they can call for consideration or help.

There is no safe house where they can go – even only temporarily,  to get away from the family who abuses them. There is no one that can follow them to the police or court.

This means that even if this help is essential, they cannot receive this in Nepal. 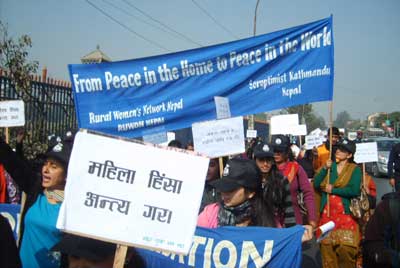 However, Nepal has some organisations working for women’s rights, against domestic and gender violence. Nevertheless, the organisations are lacking in resources, which means that they cannot reach women in the rural areas, or women in the cities, either.

This situation results in only a few women getting help from the NGOs; but for the majority, there is no help available.

Even worse, statistics present that around one fifth of the population of Nepal find domestic violence acceptable.

Violence from Husband to Wife

For women, the home is the most unsafe place to be.

It is in the home that women are most likely to be abused in the following ways: violence, marital rape, physical abuse, mental torture, polygamy, and lastly –  being forced out of home without the possibility to fulfill essential needs such as eating food.

Moreover, it is only a small percentage of the population of Nepal that divorce, which means that there is a social stigma associated with getting divorced.

Not only causing divorce, domestic violence also has a negative impact on women’s education, employment, personality, and their possibility to become leaders. For instance, many survivors claim that the violence has made them more insecure and isolated.

Before the crime begins, the husband often isolates his wife, humiliates her, and uses other forms of mental torture, since he attempts to make her more vulnerable. Another consequence of this is that a majority of the women survivors report psychosocial problems.

Still, one third of the women receive no help at the hospital.

Other Kinds of Domestic Violence

In addition, they come from different family backgrounds, with different customs and different work ethics. Many of them are also illiterate. All these dissimilarities cause potential conflicts.

Another part of the problem is that the husband often is far away working in another city. This decreases the possibility  that someone that can intervene if something happens. Lastly, domestic violence is often kept as a family affair, which means that victims will not ask anyone for help.

Other kinds of violence are domestic violence towards children.

It is true that one said that “you cannot choose your parents”, and some of the kids unfortunately have bad luck. Their parents do not respect them, and they abuse them every week –  or even many times a week.

Because of the fact that the children are young, they are extra vulnerable to bad treatment –  and they are also very dependent on their parents. One serious consequence of domestic violence against children is that some of the children leave their parents´ home.

Since they are young, they do not have money to afford accommodations, which means that they become homeless.

Without any help or support from the civil society, it is often unbearably hard for the survivors of the abuse to leave the family that abuses them. Referring to the UN Population Fund, domestic violence is seen as a private affair, where involvement from outside the family is not encouraged.

There is also a wide social approval among men and women to not talk about this issue.

Thus, many abused women and children find it hard to speak about their problem. In addition, there is today nearly no help in Nepal for survivors that suffer from domestic violence.

The only one that can help them is the hospital,  maybe some of their family members, and if they are lucky – a few number of NGOs.

If a woman is a victim of domestic violence in Nepal, sometimes not even her family helps her, since it is very taboo to talk about domestic violence, and because the husband in most cases is regarded  as the economic power as well as having higher status in society.

Therefore, the family does not always support the victim since she is the weaker alternative.

It is also claimed that women telling about their abuse often are convicted for dishonoring the family.  If the survivor of domestic violence is brave enough to tell the police about what happened, the policemen are not always understanding and supportive.

There is a tendency in Nepal among society and policemen to be negligent towards survivors of domestic violence. It has been reported that policemen sometimes even refuse to register some of the abuse cases.

Rural Women’s Network Nepal (RUWON Nepal) is currently working to initiate the first and only hotline in Nepal.

The hotline which will be free of cost for all, will be the connection between the survivor of domestic violence and government services such as the hospital, police, and the rest of the legal system.

In addition,the organisation wants to open a safe house for the survivors of domestic violence, in which they can live temporarily when they have left their homes.

RUWON Nepal further wishes to organise a support program for the abused women, girls and boys, in which they can come in contact with someone that helps and supports them during the process from the first reporting of the abuse and all the way to the trial.

According to the Asia Foundation, the primary reason (73%) why women did not report incidents of violence against them, was due to the fact of their economic dependence on their spouse and family.

In response to this, RUWON is now running micro-saving programs in the rural areas, which aims to make women self-sufficient.

The women will also gain confidence when they feel economically independent towards their family.

Since 2008, RUWON has participated in a global campaign, “16 Days of Activism Against Gender Violence”.

RUWON contributes to the campaign by organising a program with interactions and discussions between stakeholders, with the intention to raise awareness about this issue –  both among the society, and on a political level.