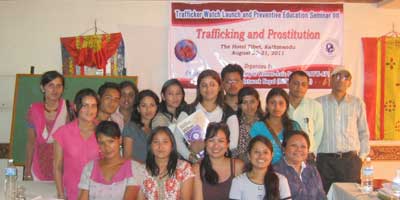 Nepal: Spotlight on Trafficking and Prostitution

Trafficking & prostitution are rampant in Nepal

The objectives of the seminar:

The first day was geared toward government agencies. Many representatives attended, such as the police, prosecutors, judges, and social workers, as well as civil society and activist organizations at the national level, 13 representatives from different government bodies and NGOs.

The next day was same program,  but geared toward city and municipal-level governors, agencies or leaders, and also local activists;  19 representatives from different NGOs and women's groups gathered together.

RUWON Nepal presented Nepal's national situation and its laws, as well as the last end of the program.

Gettie Sandoval, and Jean Enriquez – with RUWON Nepal, summarized and reviewed  the roles of  civil society and government agencies utilizing local laws and pushing for legal reform, and a  memorandum of agreement of cooperation, gender-responsive handing of cases workshops, and discussion with the participants.

Different leaders from various organizations and civil society gave feedback on the seminar.

Human trafficking is a global issue; Nepal is not an  exception to that.

The small hotels, restaurant sector, and massage parlors in Nepal have emerged as a visible intermediary supply site in the context of internal as well as cross-border trafficking of girls and young women.

In Nepal, there are both males and females in the field of prostitution  – and among them, the number of females is quite high compared to that of males.

According to the government's data, there are around 60,000 persons in prostitution in the country, and studies estimate up to 25,000 prostitutes in the capital, Kathmandu Valley, alone.

The Badi community has for a long time been involved in prostitution from generations in mid and far western Nepal. These groups have been raising their voice for providing them with some other viable opportunities and skills, the Kantipur Daily Newspaperreported.

Nepal's national daily newspaper, Naya Patrika, said that although the Badi women showed their interest was not in indulging in prostitution if other alternatives were provided, the government  was still ineffective to provide them with viable opportunity,

The last five to six years have seen an unprecedented number of women and girls entering employment as workers in dance, cabin restaurants and massage parlors in Nepal. This has somehow helped in the economic independence of the girls and women, but on a larger scale, put a threat to their lives of  making them vulnerable to different forms of abuse and exploitation –  and moreover, hampering their social development.

Large numbers of females from the rural areas are being trafficked in a huge number by their relatives and friends, especially near and dear ones, due to their lack of knowledge –  and basically lack of choice and coercion.

The women are forced to prostitution through either coercion like human trafficking or by unavoidable circumstances posed by the vicious circle of poverty.

According to Senior Superintendant Poilice (SSP) Nawaaraj Silwal (Police Personnel) in an interview with Himalayan Times, many people –  mostly women, have chosen prostitution out of lack of choice and, as a last resort, almost 50% of them are forced to become prostitutes due to illiteracy, poverty, and the unawareness of vulnerability of catching HIV.

The situation worsened during the armed conflict when many lost their husbands when the male member of the family had to migrate to different districts, leaving them with no choice but to take this profession for the survival of themselves and that of their children, as most were uneducated, and did not have many skils and access to learn new skills.

A study from NGO Maiti Nepal on Children and Women Saved from being Trafficked (CWST) showed that in recent years,  CWST was high in 2008, while it decreased in 2009 and increased in 2010.

Children and Women Rescued/Repatriated (CWR) also gradually decreased. Human Trafficking Cases initiated (HTC) was non-existent in 2008, while in 2009 it was 19 and in 2010 it is decreased by one.

Many NGOs Are Fighting Trafficking in Nepal

There are a large number of NGOs in Nepal and many of them are working extremely effectively to combat human trafficking:

These organisations provide training, workshops, rehabilitation to the victims, and provide different preventive measures, although very few NGOs are involved in advocating against trafficking.

Apart from the NGOs there is the Human Rights Unit inside the law enforcement agency,  like the police office.

Although there is not a separate unit to look after human trafficking, they are providing  training, orientation, awareness through the same unit.

They have a separate desk for protection and promotion of human rights. They work with the Office of the High Commissioner for Human Rights (OHCHR), the National Human Rights Commission (NHRC), and the International Committee of the Red Cross (ICRC).

Media: An Indispensable Tool for Awareness-raising

Media also plays an indispensable role in educating people about the many manifestations of global human trafficking, presenting the problem in human terms and in all its painful detail.

For the past ten years, women have been appointed as reporters on women's issues.

The media has a large role to play in mobilizing public support and involvement to help prevent and combat trafficking. Due to its reach and ability to mold public opinion, it is a powerful tool of social change.

Various movies have been produced in relation to the trafficking like Cheli, Chelibeti, and one popular television series, Ek Raat (One Night) during the 1990's.

Civil society also encourages the Nepal government to curb human trafficking and promote the cause of a planned approach to safeguarding women's and children’s rights in Nepal.

Though it does not have a separate strategy of human trafficking, it acts as a pressure group to persuade the government  to combat the problem.

About the Coalition Against Trafficking in Women -  Asia Pacific (CATW-AP)

The Coalition Against Trafficking in Women is an international network of feminist groups, organizations and individuals fighting the prostitution of women globally.

CATW, or The Coalition, brings international attention to trafficking in women and girls, prostitution, pornography, sex tourism, and bride selling, mainly through campaigns and policy advocacy. CATW has a CATEGORY II CONSULTATIVE STATUS under the UN Economic and Social Council since 1989.

The Coalition Against Trafficking in Women – Asia Pacific is part of CATW International.