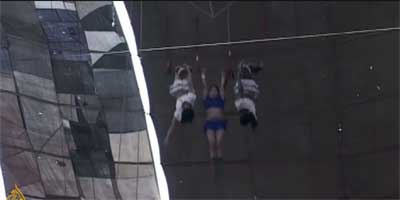 Children perform at a Nepali Circus: Still from Al-Jazeera Video

An investigation into the trafficking of Nepalese children to work in Indian circuses.

In the border district of Hetauda, in southern Nepal, child trafficking is rife and the lack of border controls makes India an easy destination. For decades, Nepali children, mostly girls, have been sought by Indian circuses for their fair skin and beauty.

Often sold to traffickers by their parents, the children are enticed with stories of beautiful new clothes, a glamorous and exciting life, the chance of an education and a regular wage. Children, sometimes as young as five years old, have been taken and, in some cases, never seen again. Sold for as little as 1,000 rupees ($13), the families rarely receive the promised wage.

Children are routinely beaten and sexual abuse is commonsplace

Once in the circuses, these children often live in squalor and are never allowed to leave the circus compound. They are routinely beaten in order to teach them the difficult and dangerous tricks, and sexual abuse is commonplace. In effect, these children have been totally at the mercy of circus management who treat them as they please.*

In 2002, this scandal was exposed by a Nepalese children's charity, the Esther Benjamins Memorial Foundation (EBMF), which runs a children's refuge in Kathmandu. With police support, the EBMF started carrying out surprise raids on circuses to rescue these highly vulnerable and at risk children.

To date more than 300 Nepalese children have been rescued by the EBMF and, where possible, returned to their families. Those at risk of being re-trafficked or whose families are too poor to support them are given a place to live at the trusts' refuge in Kathmandu.

The refuge is run by Shailaja CM and is home to 122 children, half of whom are from circuses. Shailaja heads the rescue operations and also tracks down the Nepalese traffickers who sell the children to the circuses. Many of these traffickers are now serving long jail sentences.

Through this relentless work, conditions in circuses are improving. But there are thought to be more than 100 circuses operating in India and only 12 of these are registered with the Indian Circus Federation - a non-governmental body that ensure standards and good practice. This lack of regulation makes circuses extremely difficult to monitor, and it is thought that there could be between 1,000 and 2,000 children working inside circuses today.

This film follows Shailaja and the EBMF team on their first rescue operation. They set off from Nepal to raid a large circus operating in the state of Uttarakhand in northern India which is suspected of using child performers, but as filmmaker Sky Neal finds out there is still a very long way to go before child labour and trafficking into Indian circuses is brought to an end.

Some of the bigger Indian circuses are suspected of having links with other businesses, such as gambling and gun running. As a result they can hold great power within the states where they operate, even on a political level, and have been known to collude with local government officials to organise their protection in the case of a rescue operation.

Their wealth and power have made it very difficult for Shailaja and the EBMF team to take any action against them. In the past, on attempted rescue operations in some of these larger circuses, they have been faced with guns and received death threats.

But in April 2011, an amendment was made to the Juvenile Justice Act, making it strictly illegal for anybody under the age of 18 to work or train within circuses. With this amendment in place, the EBMF is now planning a new phase of raids that will target these larger, more powerful circuses first. 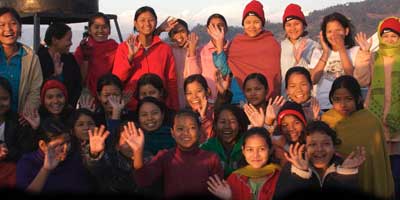 The Esther Benjamins Trust rescues Nepalese children who have been trafficked or displaced into India - including many who were sold into Indian circuses and forced to work as performers.

They offer refuge and rehabilitation to rescued children and young people who cannot be returned to their families for fear of being re-trafficked. Refuges are offered access to a full education and a range of vocational training opportunities.

There are currently 131 vulnerable children in the Trusts full-time care.

Who was Esther Benjamins?

Esther Benjamins was an eminent judge with a prevailing sense of duty to protect vulnerable children. She took her own life in January 1999, citing childlessness in a single-line suicide note explaining her reasons to her husband Philip Holmes.

Philip resolved that something positive should come from the tragedy and decided to honour Esther’s memory by forming a children’s charity bearing her name to perpetuate her values and offer hope to vulnerable children.

Nepal was an obvious area of focus for the Trust, a country that had always been close to Esther and Philip’s hearts while the couple lived and worked alongside many Gurkha families during Philip’s successful career as a Dental Officer in the British Army.

Esther expressed a keen desire to visit the country and find ways to transform the lives of the most innocent victims of its chronic poverty - its children. While she never realised those dreams in her lifetime, The Esther Benjamins Trust is dedicated to achieving them in her memory.