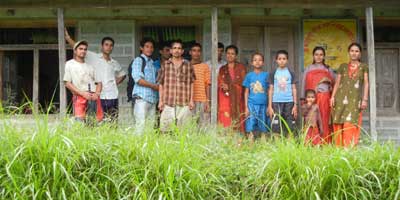 "I had a crop failure two years ago," says Shobha Devkota, 32, from Jibjibe village in Rasuwa, a hilly district in central Nepal which is part of the Langtang National Park, a protected area encompassing two more districts, Nuwakot and Sindhupalchowk.

"The maize was attacked by pests, the paddy had no grain and the soil grew hard. I had a tough time trying to feed my three daughters and sending them to school."

Since her marriage 17 years ago, Shobha had been sharing farming chores with her husband Ram Krishna. However, when he left for Dubai four years ago to work as a security guard, farming became her responsibility entirely.

Though she has never been to school and can only scrawl her name, Shobha and other women in the village who share similar backgrounds, are keenly aware of changing climate and its adverse impact on livelihoods.

"Daytime temperatures are rising, rainfall has become erratic and there are frequent landslides and hailstorms," she says.

In 2007, when World Wildlife Fund-Nepal (WWF-Nepal) launched its Langtang National Park and Buffer Zone Support Project to conserve biodiversity and enhance livelihood opportunities by integrated management of land, forest and water resources, it commissioned a study on the impact of climate changes in Rasuwa.

The study by Resource Identification and Management Society-Nepal, after consultations with villagers and analysing data from 1978 to 2007, came up with alarming findings: There was an increase in seasonal, yearly and monthly temperatures in summer and monsoon while winter temperatures were decreasing.

Even more critically for agriculture, the average annual rainfall distribution showed a decreasing trend of nearly one mm per year.

The changes were believed to have led to frequent landslides, droughts, hailstones, and windstorms. In addition, there were frequent outbreaks of diseases like jaundice, typhoid and diarrhoea.

Agriculture, the mainstay of the district, was hit by loss of arable land due to landslides, pests and crop diseases.

When WWF-Nepal started consultations with villagers on how to protect water resources and crops, the women pointed out that the indigenous seeds they had used in the past were better suited to the changing weather conditions.

"The local seeds we used could withstand both excessive rain and drought," says Chandrakumari Paneru, a 27-year-old female farmer from Bhorle village and a university degree holder in a district where almost 60 percent of the population can only sign their names.

"But we had to use hybrid seeds imported from India as local stocks were decreasing. The hybrid seeds produced a good crop one year, but the next year they would prove sterile. It led to farmers using more chemical fertilisers and the soil turned hard while health hazards increased."

Paneru is also a member of the Mahalaxmi Women’s Savings and Loan Cooperative. In a village that has no banks, it collects small sums of money from its 200-odd members to create a modest fund that can provide loans in times of need.

"We set up a community seed bank"

"As we were running our own cooperative, we felt we could do something more on our own," says Paneru. "So we asked WWF-Nepal to help us set up a community seed bank."

In 2010, Paneru and another member of the cooperative, Ambika Poudel, went to visit three community seed banks in the far western districts of Bardiya and Kailali to see how they worked.

Encouraged by the seed bank they saw at Masuria in Kailali district, also run by women, they established the Bhorle Community Seed Bank, the first of its kind in Rasuwa, with Nepali rupees 80,000 (about 1,084 dollars) provided by WWF-Nepal.

Operating from a room in a one-storey building, the seed bank today stocks 68 varieties of seeds, including grains like rice, maize and millets, and vegetables like tomato, green chilli, cauliflower and cabbage. The women’s cooperative runs from the adjacent room.

Members of the bank can take loans of one to two kg of seeds and have to repay twice the amount within six months.

This year, the seed bank put up a stall at an organic biodiversity fair to explain how local seeds meant better insurance against weather swings and how the bank operated.

Government of Nepal has followed the example

Unknown to the women of Rasuwa, the government of Nepal has been following their example. The department of agriculture has established community seed banks in three more districts: Sindhuli, Sindhupalchowk and Dadeldhura.

"In 2009-2010, there was a severe maize crop failure in two districts in southern Nepal, Bara and Parsa, that imported about 30 percent of their seeds from India," says Dilaram Bhandari, chief of the seed quality control centre in the agriculture department.

"The seed banks were started to boost the replacement of quality local seeds as well as preserve biodiversity," Bhandari explained.

While women comprise more than 50 percent of Nepal’s nearly 29 million population, in many districts their numbers are higher due to outmigration of men in search of jobs. That has led to nearly 40 percent of farming now being done by women, according to Bhandari.

In the seed banks and other cooperatives run by the government, the state policy is to ensure at least 33 percent participation by women.

"We chose Rasuwa because it is much more vulnerable to climate change, being both a mountain community and a poor district," says Moon Shrestha, senior climate change adaptation officer at WWF- Nepal. "We had to also keep in mind the capacity of the community to adapt to the changes.

"Today, the Bhorle Community Seed Bank is not just a pilot project it is a demonstration site as well."