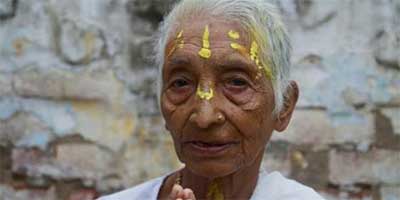 The holy city of Vrindavan in India is known as a popular Hindu pilgrimage centre but it is also known as the 'city of widows', with an estimated 20,000 calling it home.

The ancient Hindu tradition of widows throwing themselves on their husband's funeral pyre to join his soul in death was banned by the British in 1829. Yet the long-held belief that a widow's fate is intertwined with that of her husband continues in many parts of India today. Many are shunned by their family and are seen as a financial drain.

Ostracised by society, many widows travel to Vrindavan for a life of devotion and dignity. Many survive by begging on the streets, sleeping in government run care homes, shabby rented accommodation or on the streets.

They are expected to live an austere life and to renounce worldly pleasures. They leave behind their colourful saris, part with their jewellery, and shave their heads. Many are often escorted by their relatives to Vrindavan, who leave them in the city with no intention of ever taking them back. Others arrive willingly and return to visit their homes a few times in a year.

In this city of more than 4,000 temples, no one goes to bed hungry. Locals and visiting pilgrims offer food and money to the widows to gain spiritual merit. The widows can also earn 15 cents a day and a hot meal by singing religious hymns and chants at the local ashrams.

But in death, as in life, the widows are treated with disregard.

Last year, a huge media stir was caused when a local Indian television channel reported on how the bodies of Vrindavan's widows were being disposed. The report revealed authorities were chopping the bodies into pieces and putting them in gunny bags to throw into the river - claiming a lack of money for proper cremation.

101 East explores the daily battles of India's abandoned widows as they face restrictions on inheritance, remarriage and social welfare.

We meet one widow, Geeta, who was cast out from her family in West Bengal. She now lives in a government-run shelter after leaving her home where she says she was beaten and abused. We travel to her village, three hours away from the capital city Calcutta and meet her family to hear their side of the story.

We also meet individuals and NGOs who are unafraid to break social taboos, working to help empower widows across Vrindavan. Dr Bindeshwar Pathak, the founder of Sulabh International, has adopted seven shelters and government homes in Vrindavan, providing the widows with a monthly stipend of $35, seven times more than the government pension.

Lastly, we speak to Mamata Sharma of the National Commission for Women to explore how India plans to tackle the growing population of its widows which stands at 40 million.

Dying with dignity means different things in different cultures but for India's widows, it means being cremated in accordance with traditional Hindu rituals.

I first encountered the widows of Vrindavan city in Utter Pradesh, during a trip nearly five years ago, visiting temples across India. Ironically, it was during my stay in this holy city that I began to question certain aspects of Hindu tradition. Why must a woman whose husband dies, lose her place in society? Why must she renounce her worldly desires and possessions? Most of all, why must she put herself through more pain, having just become a widow and live a life of penance?

I was keen to explore the issue further and returned to Vrindavan last July to research a story on the city's widows.

The city attracts pilgrims who believe it is where the Hindu deity Krishna spent his childhood. It is also a magnet for India's widows, seeking refuge after being ostracised and abandoned.

During my visit, I met widows living in privately rented accommodation and government-run care homes, but many more were facing greater hardships, surviving in dismal shacks or on the street. I was drawn to their stories. One after another, they spoke with the same underlying theme of abandonment and loneliness. Yet their strong will to survive shone through.

Many of the stories were distressing, ranging from how the widows had been exploited by their family members, to those who had been physically assaulted by their sons and daughters-in-law. Others had known little beyond a life of sorrow. They were child brides who lost their husbands at a tender age, only to be packed off to Vrindavan by their families before they could even make sense of what had happened to them.

Narotama Dasi, an octogenarian was married at the age of seven and widowed at nine. She came to Vrindavan from Nepal when she was 18. Today she lives at Radha Teela, a squat on the outskirts of Vrindavan that is home to 23 widows.

"There was nothing here when I first arrived ... it was an empty plot of land and we would sleep under this tree," recalls Narotama.

She is now the squat's oldest resident. "This tree is the only thing here that is older than me," she quips. Unlike many who share, Narotama has her own small room, a tiny brick shed with no ventilation or electricity but Narotama appears content.

I had spent a few hours at Radha Teela when Maya Dasi, a widow in her sixties, told me a shocking tale. The dead bodies of some of the city's widows had been chopped into pieces, put into bags and thrown in the river. "Yes, it happens ... it costs anywhere between $100 to $150 to buy wood for the cremation ceremony. How can we afford it?" says Maya.

What disturbed me even more was how she told me the story with an air of acceptance.

"If we can't collect enough money, then we buy whatever little wood we can, and cremate the body and whatever is left of it, we immerse in the river ... we don't have any other option," Maya explains.

It was heartwarming to hear that even though these widows have so little, they still contribute whatever they can to buy wood for the cremation of another widow when she dies.

Critics like Mamta Sharma of the National Commission for Women blame government neglect for failing to tackle the issues facing India's widows. Mamta believes if civic bodies and local governments followed the mandates set for them, such problems could be resolved.

But it is a massive challenge with India now home to almost 42 million of the world's 115 million poor widows, according to the United Nations.

I left Vrindavan to forget the warmth and stories of the widows at Radha Teela. A few weeks later, when I returned to film A Widow's Penance, Dr Pathak, a philanthropist dedicated to helping India's widows, agreed to visit Radha Teela with me.

After meeting the women and hearing their stories for himself, Dr Pathak gave them some life-changing news. He would adopt Radha Teela and take responsibility for the widows' care. As well as providing them with a monthly stipend, clothes and medical treatment, his organisation, Sulabh International, will ensure that the widows' last rites are performed with respect.

Maya smiled broadly upon learning that she would receive a proper cremation and die with dignity.

According to Hindu scriptures, cremation "releases an individual's spiritual essence from its transitory physical body so it can be reborn". Maya, and Vrindavan's thousands of other widows, will surely be praying that the afterlife is free from the misery and suffering that has defined so much of their earthly lives.