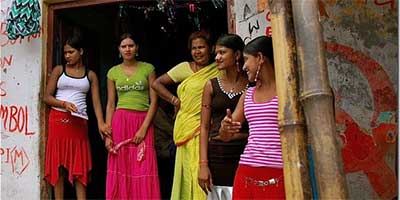 It is as if they have given up hope of ever seeing their girls again. They are an Adivasi family from a remote village in Assam state in India, nestled in the Himalayan foothills. The picturesque surroundings belie the hollowness they feel within.

Three of their four daughters have been missing for the last five years.

“Poor and ignorant, the parents simply don’t know where their girls have gone,” says Sunita Changkakati, executive director of the Assam Centre for Rural Development, an NGO in Guwahati.

The Adivasis, an aboriginal tribal people whose ancestors the British had recruited from central India to work in the tea plantations of Assam, are particularly vulnerable to the menace of human trafficking, though women from tribal areas in lower Assam and others from neighbouring states in the northeast have been falling victim too.

Wily agents stalk the countryside, hunting for gullible prey. The bait most often is the promise of big money, the lure of city life or the prospect of escaping a humdrum existence. Some even dangle the prospect of marriage, hooking impressionable girls under the pretence of having fallen in love with them, ‘marry’ them in secret, and instead of a promised honeymoon, deliver them to prostitution.

Accordingly, in the last couple of years, there have been media reports of girls from the north-east of India and other parts of Assam being rescued from brothels in Delhi, Mumbai, Pune and elsewhere in the country.

According to the records of the Criminal Investigation Department (CID) of the state government of Assam, the recorded number of girls trafficked for sale outside the state started with a minuscule four in 2005, went up to 37 in 2009, 54 in 2011, and 79 in 2012.

These numbers could be far from the real story, since parents seldom register cases of their missing daughters.

Not all the missing girls end up in the sex trade. Bizarre as it may seem, many of them, some under the age of 18 – the stipulated year of adulthood under the Indian Constitution – find themselves getting married to much older farmers in the faraway Indian states Punjab and Haryana.

Female foeticide and infanticide have skewed the male-female sex ratio in these two north Indian states, leaving men in these villages with no women to marry. Hence, the practice of ‘buying’ consorts from middlemen. Getting a bride from the north-east may have been unheard of earlier. No longer so, never mind if there is little in common between their cultures.

Some of the other abducted girls find themselves in the domestic help circuit in India’s metropolitan cities. Recruited by affluent families, “they are often underpaid, working almost as bonded labour,” says Stephen Ekka of Pajhra (meaning ‘spring of life’), an NGO in Tezpur in the north-eastern state Assam.

“Trafficking doesn’t mean only those sold into the sex trade,” says Ekka, who himself belongs to the Adivasi community. “Anyone who is unwillingly confined to a work-field can be considered as being trafficked.”

Rajeeb Kumar Sharma, general secretary of the Global Organisation for Life Development (GOLD), an NGO in Guwahati, tells IPS about the case of a domestic worker recruited by a Delhi-based agent who complained of stomach pain, and when taken to a hospital was found to have had an organ removed without his knowledge. The hapless man was told that since so much expense had been incurred on his behalf, he had to make good the loss by bringing another able-bodied person from his village.

Poverty and unemployment are the primary factors driving the villagers to desperation; the lack of social mobility and of education and opportunities for young people compounds the problem.

Assam’s famous tea plantations, a major source of employment for the state’s populace and crucial contributor to its revenue, have been facing hard times in recent years. To cut costs, many have started employing only casual labour, especially during the tea plucking season. It wasn’t unusual in this scenario for girls to go out looking for work, even if their parents remained unaware of where the money was actually coming from.

Even in the remotest village, the name ‘Delhi’ now evokes instant recognition and is perceived as the magic word to open a world of untold riches. Often, a girl ‘from Delhi’ comes visiting, attired in ‘fancy’ clothes and heavy make-up, and bragging about how much she earns. It’s often a ruse, the surface glamour a lure to recruit other girls.

Trapped thus, many girls set out to follow a dream, and return after visiting a nightmare, if they return at all. Changkakati of the Assam Centre for Rural Development recently came across a girl in a village who was barely 14 years old and nursing a six-month-old baby. “When we asked her mother about it, she said her daughter was married. The husband (she said) was apparently from Bihar, but since he had a shop in Delhi, he could not be with them. The mother was obviously lying, but what could we do?”

NGOs like the one Changkakati works for or Ekka’s Pajhra, among many others, have been working in the past few years to raise awareness about human trafficking, helping rescue victims and rehabilitating them. Helping them in their efforts are local student bodies as well as organisations such as the All-Adivasi Women’s Association of Assam, headquartered in Majbaat near Udalguri town. Their members have easy access to the local community, making it easier to keep tabs on girls missing in the area.

NGOs in the state have taken to implementing Ujjwala, a scheme to combat human trafficking, particularly of girls sold into prostitution. Vigilance committees look out for possible cases of trafficking, and work in close collaboration with the police to rescue girls. In 2012, 78 girls were admitted to shelter homes.

Rehabilitating the rescued girls, however, is difficult, especially if they have returned after a few years, due to social stigma.

“Some girls have come back with really bad health conditions,” says Pajhra’s Ekka. “They look depressed too but do not want to talk much about what may have happened to them.”

The state CID department has set up 14 anti-trafficking units. Special vigil is kept at railway stations.