Cashing in the children 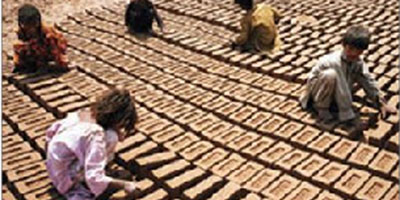 Cashing in the children

Trafficking is not new to the northeast of India. The twist, however, is that operators have become more sophisticated. They now masquerade as evangelists and missionaries and enticing the poor parents with promises of upkeep and education, spirit their children away.

It was a choice Nilomon wished he didn't have to make. A neighbor's contact had offered to take his little boy to a children's home in Guwahati.

Nilomon, a daily wage earner, was very fond of his nine-year-old son Sanjit who was traumatized when he lost his mother and sister in the communal riots of October 2008, in his village, Rowta, in Assam.

Sending Sanjit away to a place where he would be taken care of seemed to him a necessary evil. Nilomon decided he would take up the offer. Little did he realize that the "Good Samaritan" was a child trafficker - perhaps part of a larger gang - and that he planned to spirit the boy out of Assam.

Days later, some student activists noticed Sanjit at Bongaigaon station. He was boarding a Chennai-bound train with great reluctance. They rescued the boy from the operator and sent him back to a relieved Nilomon.

Children are a precious commodity in the northeast, especially in the two states of Assam and Manipur. Child trafficking has assumed the character of big business with whole cartels working at it. The destination of the hapless child is south,primarily Tamil Nadu.

Although exact figures for Manipur were not available, sources said since last year close to 200 Manipuri kids, both boys and girls, were rescued from unauthorized homes in south India.

Children belonging to Zeliangrong and Kuki tribes have become soft targets for traffickers. The lure is often free education. Eager to keep their wards safe from the insurgency and drug abuse in the region, parents often willingly give away their children and pay up to Rs 10,000 for their lodging and food.

Trafficking is not new to the northeast. The twist,however,is that operators have become more sophisticated. They now masquerade as evangelists and missionaries and enticing the poor parents with promises of upkeep and education, spirit their children away.

If the rescue operation carried out last month in Kanyakumari is any indication, the traffickers are mainly targeting Christian children. Which is probably why the garb of the evangelicals is a favorite ploy with the operators.

A Season in Hell

Once the children reach Tamil Nadu, they find to their horror that they are put up in unauthorised homes. The living conditions at these homes are appalling.

Eventually,the children end up as domestic servants, beggars, quarry or circus workers,or are used in the organ trade, drug peddling and smuggling.

Many of them are also sexually abused.

Renuka Devi Borkotoky, head of the Assam unit of Indian Red Cross Society, believes that child trafficking has become an organised racket and is spreading like a rash in the northeast.

"Child traffickers step up their offensive when hundreds of families become homeless thanks to annual floods or ethnic clashes. These are the times when the people are most vulnerable," says Bokotoky.

In Manipur, the fact that its education system leaves much to be desired also adds to the lure of the traffickers. The general run of schools in the state is under-furnished and understaffed. Even where there are teachers, they play truant. Classrooms are in a state ruin. This is certainly not the best place for a child to study and come up in life.

With increased incidence of child trafficking in the region, child's rights activists and NGOs are on high alert. Child Line, a child's rights organisation with national presence, was set up by the ministry of women and child development and given the mandate to curb trafficking. It has played a pivotal role in bringing back rescued children and rehabilitating them.

Mala Lisham, coordinator of Child Line Imphal, says in June 2009, 25 children trafficked from the remote Kaibi village in Manipur were rescued from an Andhra Pradesh-bound train at Howrah. "Around the same time, six girls hailing from Churachanpur were rescued from a bus terminal in Imphal just as they were about to be smuggled to Delhi," says Lisham.

Last year, her agency rescued 15 tribal girls from being trafficked to Chennai and three kids from an illegal home in Bangalore.

Despite the efforts of such organisations a number of cases of child trafficking still go unreported.

The slow judicial process adds to the problem. Most of the reported cases are pending in the courts, and the culprits manage to get bail and remain active.

Activists also complain of police apathy. A top official of the local Child Welfare Committee says, "The police have failed to recover children in over 70 per cent of the cases." The committee, comprising 32 NGOs,including some registered orphanages, is looking after the rescue and rehabilitation of the victims.

Despite the misgivings of NGOs, the state administrations seem to be on their toes. Officials in Tamil Nadu said the children rescued from the state and belonging to the northeast will be sent back after a probe.

Manipur's social welfare department has issued a notification making it mandatory for all to obtain its approval before taking children outside Manipur borders.

The department has set up an emergency child help line, 1098, which could be contacted for immediate action if groups of children are seen in travel mode under suspicious circumstances at bus or taxi stands, airports, railway stations and hotels.

Will all these measures stem the trafficking trade? To some extent, yes. But the government - and police - needs to keep up the pressure and simultaneously address developmental problems in the region.

**Sanjit's name has been changed to protect his identity