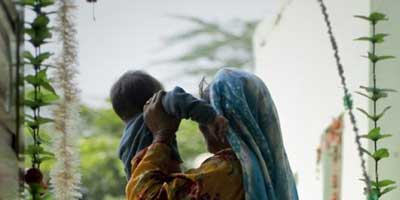 When Ayesha was 13, she fell in love with a man who promised to marry her and nurture her singing aspirations, but instead turned out to be a sex trafficker. He took her far away from her family and village in Bangladesh to Kolkata (also known as Calcutta), India where he promptly sold her to a brothel. Young and alone in a huge city, Ayesha tried in vain to escape; instead she was sexually exploited for years, suffering repeated rapes and beatings by her “owners.” Ayesha gave birth to three children while in captivity. When it became evident that the local pimps wanted to prostitute her oldest daughter, Ayesha knew she had to protect her family. With the help of Apne Aap, a local NGO working to empower girls and women to resist and end sex trafficking, Ayesha was able to get support for her children and eventually exit prostitution. Instead of becoming another victim, her daughter received professional training and now supports her family through her job as a gas station supervisor at the first all-women run petrol pump in Kolkata.

In January 2013, amidst an outcry to end violence against women in India, a committee led by recently-deceased former Supreme Court Chief Justice J.S. Verma, released an investigative report that noted the high prevalence of sex trafficking of women and girls in India. While actual numbers are difficult to obtain, government and NGO reports suggest that hundreds of thousands to millions of women and girls are prostituted in India (median age of entry is 11 years old), many of whom are victims of sex trafficking. However, despite the high prevalence, very few cases of sex trafficking are actually reported and prosecuted. In 2011, the arrest rate for people accused of “kidnapping and abduction of women and girls” was an incredibly low 3.7%, according to the latest report by the National Crime Records Bureau of India.

On the recommendation of the Verma Report, the Government of India recently adopted anti-trafficking provisions in the Indian Penal Code (IPC) through the Criminal Law (Amendment) Act of 2013, to conform to the internationally-recognized definition of the crime of trafficking as outlined in the Palermo Protocol. However, India’s other anti-trafficking legislation, which includes more comprehensive anti-trafficking laws, the Immoral Traffic (Prevention) Act (ITPA) of 1956, has not been changed in nearly thirty years. Therefore, Equality Now and Apne Aap are calling on the government to amend the ITPA by including specific provisions that will improve anti-trafficking efforts, protect children and survivors and address other shortcomings still remaining. Amending this Act will put India in line with its international legal obligations under the Protocol. The provisions are: