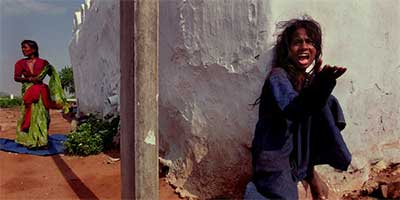 A mentally ill woman is chained to a cement post outside a Darga Muslim Tomb in Hyderabad, India, that is believed to have curative powers. | Photo: Carolyn Cole / Los Angeles Times

In rural areas of India, many villagers still believe mental illnessis caused by evil spirits angry that the sick person had killed a cow during a past life. So-called therapy, conducted by witch doctors or family members, can include chaining up the mentally ill, chanting spells, poking them with pins, or beating them "to force the spirits out."

"There's little awareness that it's a real illness," said Dr. Indira Sharma, Varanasi-based president of the Indian Psychiatric Society. "Most people think it's all a figment of your imagination. There's still a very deep stigma."

With a population of 1.2 billion people, India has 4,000 psychiatrists, compared with 50,000 in the U.S., about 4,500 in California alone. But in recent years, the Indian government has increased budgets for psychiatric education and mental health awareness, seeking to curb a sharply rising suicide rate as millions move into cities where they lack the social support they had in rural villages.

A bill awaiting parliamentary action would make mental health treatment a right, reduce doctors' power to commit patients to psychiatric treatment centers without their consent and forbid electro-shock therapy without anesthesia. It would also decriminalize suicide, provide for patient confidentiality and obligate the government to create shelters and halfway houses for the mentally ill.

"It's like training a midwife; she doesn't need to know all about anatomy," said Dr. Vikram Patel, joint director of London's Center for Global Mental Health and a member of an Indian Health Ministry advisory panel. "There's a big myth that everything psychiatrists do is so sophisticated, complicated. It scares a lot of people off. Demystifying mental health is my agenda."

Though laws can change quickly, shifts in the culture could take more time.

"There's a gradual increase in awareness that mental illness is a health problem, not a social or personal problem, but it's very gradual," Patel said.

The Vedas, ancient Indian religious texts from around 1500 BC, condemn suicide for reasons of selfishness but laud it as self-sacrificing. Traditional medicine has generally placed more emphasis on preventing mental illness than treating it — with herb-based nerve tonics, nasal therapy, vomiting, purging and enemas.

"A common belief in rural areas is that the spirit can't get out because there's no exit," said Dr. Sanjay Chugh, a Delhi-based psychiatrist. "So they'll get sticks and puncture the eardrums on both sides."

Suicide is now the second-highest cause of death in India among those between the ages of 15 and 29, according to a recent study in the medical journal Lancet. (The most frequent cause of death for males in that age category is road accidents, and for females, child bearing.) The national suicide rate was about 16 per 100,000 people in 2010, the study found, compared with 12.4 per 100,000 in the United States, according to the national Centers for Disease Control and Prevention.

Among the most common methods of committing suicide are hanging, drinking pesticide, self-immolation and drowning.

The number of hangings prompted cardiologist Ravi Shankar Sharma to devise a "suicide-proof fan" after a friend's son, who had done poorly on college entrance exams, killed himself in May using a ceiling fan that had been installed to make his studying easier. The method is a staple of Bollywood movies. Sharma's $8 device employs interlocking tubes and springs that prevent the fan from supporting a weight of more than 55 pounds.

"His mother cursed the day she replaced the table fan with the ceiling fan and said that if she hadn't bought it, her son would still be alive," said Sharma. "The ceiling fan breaks off when you're hanging and the assembly goes down, so the person lands safely on the ground."

Ragini, 35, a New Delhi native who declined to give her family name, applauds Sharma's retrofitted fan idea, and believes it could have a place in psychiatric hospitals, boarding school hostels and other high-risk areas.

However, she said that judging from her own experience, other methods could easily be found. "I wouldn't think it addresses the real issue," she said.

Ragini, a teacher, became depressed a year and a half ago. After a history of bad relationships, she had gotten engaged, only to have her fiance break it off. She developed problems sleeping, stopped eating, avoided friends, quit her job and cried incessantly. Her family and friends were supportive, but she pushed them away, feeling increasingly guilty for troubling them.

"I didn't see a way out," she said. "It all snowballed into one big self-bashing."

Eventually she bought a rope, borrowed a stepladder and, one day while her parents were out and her brother downstairs, she hanged herself from the ceiling fan. Her brother heard the noise, however, and came running and rescued her. After trying two psychiatrists, she started therapy with Dr. Chugh.

"There's an impression that only crazy people go to psychiatrists," Ragini said. "If only people know depression was a disease, not their fault, and that it's all right to reach out and get help.

"People need to know more about treatment that can help them."