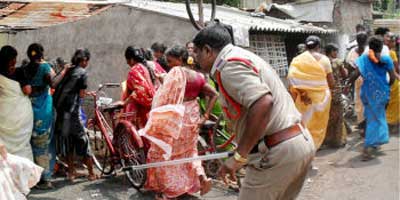 India: Is it not time to question the role of police in crowd control?

A Statement by the Asian Human Rights Commission. December 2012.

The Surendranagar firing that killed three Dalit youth on 21 September this year has once again brought to light the concern, that in India, the police do not have adequate training nor the government has necessary resolve to overhaul the police service into one that fits a modern democracy. An affidavit filed by the Gujarat State Police in the case affirms that police used weapons like AK-47 to fire upon the crowd to disperse it. The Urgent Appeal issued by the Asian Human Rights Commission (AHRC) provides the details of the case, available here.

The case is an example of how the police across the country treat protesters and public gathering. It is indeed true that in this case the police were trying to disperse two fighting factions. However, the allegation that of the two factions engaged in the brawl, only Dalits were killed and injured underlines the fact that in police actions involving Dalits, the Dalits could suffer the worst and suggests clear discrimination against the community. The AHRC is informed that in states like Gujarat, conditions of Dalits are worse, and the Surendranagar incident is an unfortunate example.

The details of the incident available with the AHRC, suggests that the local police refused to intervene at appropriate time, that otherwise could have on the first place prevented the event escalating into one that resulted in loss of lives. It is reported that the Superintendent of Police could not intervene or send adequate police force to contain the violence at an early stage because the officer and his troupes were busy providing escort to the state Chief Minister for his political rally where the minister was churning up Hindu fundamentalist religious sentiments to fortify his party's political domination of the state and upon its people.

The presence of heavily armed police officers is a common scene in India during protest gatherings. This is worse when such gatherings are organised by civil society groups, though hardly any civil society groups have questioned this armed police presence in protest gatherings. This is a crude manner in which the state tries to communicate with the subjects that it has the muscle and firepower to silence all forms of descent. The display of brute power is worse when such protests are against authoritarian development projects, organised by farmers and peasants. In states like Orissa and Madhya Pradesh, such arms display is also sponsored by private companies that have colluded with the respective state administrations and have succeeded in pushing peasant farmers and members of the indigenous communities into the verge of existence and peril. Indeed every such gathering does not result in a police firing, though brute force used by the police to disperse the gathering with sticks and torture are common. That the possibility of the police firing at the people is not an exception is a fact proved by dozens of such incidents reported from the country, Surendranagar included. It is however common for the police to open fire at public gatherings in the northeastern states, most importantly in Manipur, which is cited as another form of state sponsored discrimination against the people living in that region.

At the core of the debate is what is the police's role in maintaining law and order? There are laws in India that provide processes with which the authorities should deal with legitimate requests for organising protests. Ideally these regulations should be limited to prevent public nuisance, since the right to peacefully protest should be zealously guaranteed in a functioning democracy. Often the organisers of protests do not follow these procedures since they are discouraged by deep-rooted corruption and arbitrariness in the manner in which such applications are dealt with by the authorities, including the police. Often the police disperse the gathering by use of force, in some of the most disgraceful manner.

The overall culture of impunity enjoyed by the police across the country lets the authorities order the police to use brute force. People and police officers get injured in these events and properties get destroyed. An impartial investigation is never expected into these incidents, neither would the state compensate for the injuries sustained by the people and the police officers or for the properties destroyed in such avoidable events.

In this year alone there have been at least a few dozen of such incidents reported from India. Over the span of the past decade hundreds of such incidents have been reported from the country. However, there is yet no interest for the government or among most of the civil society in India to question whether such incidents could be avoided, and if so, what should be done. The country visibly lacks adequate number of civil society campaigns to reform the manner in which the police functions in India.

What is witnessed on the contrary is the public display of barbarity, in the name of crowd control. The police on the other hand are preoccupied with everything else other than their legitimate job, like what is evident in the Surendranagar incident, of providing escort to political heavyweights. The police as an establishment also lack proper training and resources to undertake their job, as required in a democratic society that respects the rights of individuals to peacefully protest.

Concerning the Surendranagar incident, the actions or the lack of it, by the state police should be thoroughly investigated. Policies that allow arming of police officers with deadly and at the same time useless weapons like the AK-47s that is least useful to subdue a crowd should be reviewed. The allegation that the police have discriminated the Dalits while controlling the mob must be thoroughly investigated. At the very least the officers responsible for causing the death of three Dalit youth must be brought to trial and the families compensated for the loss they have suffered.

For information and comments: Bijo Francis, AHRC. Telephone: + 852 - 26986 339, Email:
About AHRC: The Asian Human Rights Commission is a regional non-governmental organisation that monitors human rights in Asia, documents violations and advocates for justice and institutional reform to ensure the protection and promotion of these rights. The Hong Kong-based group was founded in 1984.