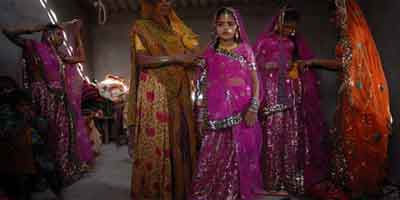 Elsewhere, it would have been front page news: a couple on the run after being caught trying to bury their newborn baby girl alive.

But in India, where there are now 914 girls for every 1,000 boys, the case this week in Dausa, Rajasthan, warranted just 300 cursory words on an inside page.

"Yet another incident of apathy towards the girl child", said the Deccan Herald.

Call it apathy, call it attempted murder. The fact is, said Zaheer Abbas, "most Indians are preoccupied with trying to eat two meals a day" – and not fretting about how the country's sex ratio has become the worst since independence in 1947.

Abbas, the editor-in-chief of the Udaipur Times, an online newspaper in southern Rajasthan, last year tried to jolt his readers into action by printing a picture of a three-month-old female foetus found in a sewage canal near the city centre.

"But look," he said last week, scrolling down his computer screen to look below-the-line on the article. "One comment. Just one. We want people to be angry about this. But they don't want to be seen by their parents and friends talking about such an issue."

One episode was dedicated to the widespread practice of aborting female foetuses, focusing particularly on the western state of Rajasthan, which has one of the worst sex ratios in the country, having dropped to 883 girls per 1,000 boys in 2011, from 909 in 2001.

Within days of the programme airing, Rajasthan's government sprang into action. Officials vowed to set up fast-track courts to punish those who practise sex-based abortion. They also cancelled the licences of six sonography centres and issued notices to 24 others for their suspected involvement in female foeticide.

A drive is also under way to install trackers at all sonography centres in the state within four months, which will allow inspectors to check how many female foetuses make it to birth and beyond. These clinics are the battleground for campaigners fighting against sex selective abortion.

"There's substantial reason to believe that the decline in sex ratio is directly related to the increase in sonography clinics in the region," said Shabnam Aziz from Action Aid in Rajasthan.

Dr Arvinder Singh is the Mr Big of antenatal scanning in Udaipur. The calm waters and Rajput palaces of this pretty lakeside city hide a murky secret: Udaipur is one of the Rajasthan districts which "lost" girls between the 2001 and 2011 censuses: there are now just 920 girls per 1,000 boys; 28 fewer than 10 years ago.

Every day his clinic carries out around 50 antenatal scans. A routine test costs 450 rupees (£5.30) – a not insignificant amount in a country where the average annual salary is about 61,000 rupees (£715).

Welcoming the Guardian into his office last week, Singh said that not one of his patients in the past six months had asked the sex of their unborn child – it was now well known, he insisted, that to ask (or tell) was illegal under Indian law.

But Manisha Bhathnagar, a local watchdog, said that the state of Rajasthan plans to file a complaint against Singh after undercover inspectors discovered that not all women at his clinic were filling out the compulsory form detailing how many children they have, what gender they are and who has referred them for a scan. "If we see from the form that a woman has already got two girls and has referred herself, we investigate," said Bhathnagar. Her office phones up women after their due date and if they say they had an abortion or miscarriage, the office investigates.

Kirti Ayengar, managing director of obstetrics and gynaecology at the Udaipur branch of Aarth, an NGO which tackles women's health issues, says there is only so much the state can do to crack down on female foeticide. "Technology is developing so fast – you can already predict the sex of a foetus at 12 weeks just using blood tests," she said, adding that what was needed was a huge societal, ideological shift.

"In my opinion, the tradition of dowry must stop, otherwise people will always find ways around the law," she said, showing us a poster in Hindi which ARTH distributes, depicting the first meeting of potential in-laws.

"Don't ask for a dowry" runs the legend, above a picture of a groom's family looking at the bride-to-be and imagining money, a car and a house.

Pragnya Joshi, an expert on female foeticide from the department of women's studies at Janardan Rai Nagar Rajasthan Vidyapeeth University, in Udaipur, said the dowry culture was primarily to blame for the ever-worsening gender ratio among children in the city and beyond.

Though prohibited by law since 1961, dowry is ingrained in Indian culture, she said. A traditional Hindu wedding blessing was, "May God give you eight sons", she said.

What Joshi finds particularly alarming is that statistics show that better educated, urban women are more likely to abort a female foetus. "Literate women are becoming more prone to female foeticide," she said, explaining that they could afford a scan and understand the notorious adverts for sonography clinics which urge: "Invest only Rs. 500 now and save your precious Rs. 50,000 later".

Although the law against sex selection appears to be easily flouted in Udaipur, not everyone has an abortion. A disturbing number of parents are now abandoning baby girls, some of whom are taken in by Mahesh Ashram, an orphanage on the city outskirts, run by Yogguru Devendra Agrawal, a holy man with a long beard and a soft voice. The ashram has distributed posters around the city with the slogan: Don't Throw Away, Give Them To Us. "See that little girl, the cheerful one?" said Agrawal, pointing out a tiny girl with sparkling eyes lying in one of 16 metal cribs. "She was found in a gutter with only her head poking out two weeks ago. She was only half an hour old." He points out another baby who had to have an operation to remove spikes from all over her body after she was dumped in a prickly bush.

They are the lucky ones. Agrawal's team cannot always reach the babies in time. "One was abandoned in winter, right next to a dripping tap," he said.

Of the 71 babies to pass through the orphanage in five years, 48 have been adopted. However, the building site next door is testament to the pessimism Agrawal feels about the future: he is constructing what he says will be the largest neonatal intensive care unit orphanage in India, with places for 100 abandoned babies.

It is not unusual for an unwanted baby girl to be given a horrible name, said Usha Choudhary, programme director of Vikalp ("Alternative"), an NGO supported by Action Aid, Unicef and Oxfam. "I've met girls called Mafi, meaning sorry, and another called Dhapu, which translates as 'enough' – she was the fifth girl in her family," said Choudhary.

As part of an effort to encourage villagers in Rajasthan to celebrate, rather than mourn, the birth of a girl, Vikalp carries out alternative christening ceremonies, giving babies names such as Khushi (Happy) or Pari (Angel).

"When a boy is born, traditional Rajasthani villages erupt in celebration, with drums banged and sweets distributed, but when a girl is born then the village is quiet," said Choudhary.

Vikalp undertakes outreach work in schools and villages, concentrating particularly on young boys and village elders in an attempt to make them reassess their views on women's worth. "We say to them: if this female foeticide carries on, what kind of a society will we have? Can you imagine a world without your wife, your mother, your girlfriend, your sister?"

Choudhary sees the contradiction of the low status of women in a country where two of the most powerful politicians – Sonia Gandhi, head of the Congress party, and Pratibha Patil, the country's president – are female.

"Sometimes women say to us, why are you talking to us about women's rights when our president is a woman?" she said. "I always tell them that two stars do not make light in India."