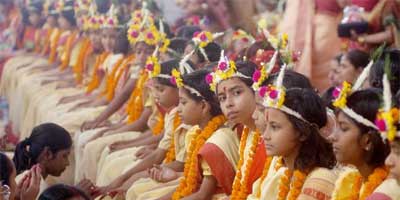 One wants to be a singer, one an astronaut, one a math teacher. For girls at this pioneering orphanage in Mumbai anything seems possible

The girl’s voice rings out, as high and clear as the song of Mumbai’s native parakeets. Sitting in front of her in pigtails and school uniforms, her audience is rapt.

“It’s a Maharashtran folk song,” says 14-year-old Pooja beside me, with a tear welling in her eye. “Padmamalini wants to be a professional singer when she’s older and she sings to us every night here in the dorm once we’ve changed into our pajamas. We’re all rooting for her; we want her to make it in Bollywood.”

A sense of family is everything at Shraddhanand Mahilashram, a progressive orphanage for girls based in the city that’s home to a glitzy film industry, but also to an estimated two million of the subcontinent’s 35 million orphans.

Few of Shraddhanand’s 140 residents, from the newborns left on the orphanage doorstep to girls who’ve arrived here in their late teens, have contact with their biological families. Most were abandoned on the street by parents who couldn’t afford to keep them in a country where boys can be the only insurance against a destitute old age.

According to a 2009 Unicef report, India has the largest and fastest-growing population of street children in the world.

'There are many issues to contend with,” Aniruddha Kulkarni of Unicef South Asia tells me a few days before my visit to Shraddhanand.

“There are shell orphanages set up by politicians for political advancement and to siphon government funds; there are unregulated institutions where maltreatment scandals are rife.

Above all there are 25 million children living rough on the streets, with no access to parental or formal care.

There’s a lot of work to be done.”

Girls are particularly vulnerable to abandonment. In addition to financially supporting their parents in old age, sons hold the promise of recruiting a wife into the family home to help with domestic labor. Girls, meanwhile, require their parents to save for an often exorbitant dowry and wedding, before relinquishing them, and their labor, to another family home.

It’s an unsavory reality that plays out in Indian labor wards, where, according to The Times of India, nurses have been known to accept bribes to exchange baby girls for baby boys. Activists talk of eight million 'missing girls’, the number of female fetuses estimated to have been aborted over the past decade due to their sex.

In 2007, in response to the crisis, the government announced a plan to build girls-only orphanages across India.

Renuka Chowdhury, then minister of state for women and child development, said:

“Have your children, don’t kill them. And if you don’t want a girl, leave her to us.”

Sadly, the initiative has yet to be realized, hobbled by India’s engrained corruption and bureaucracy. In the meantime, the private sector is left to pick up the slack, which it does patchily, with two exceptions: the states of Tamil Nadu and Maharashtra.

Maharashtra, in particular, provides a blueprint for institutional care in India, with many long-running orphanages for girls. Shraddhanand is a leading light among these leading lights: an establishment so respected that the Indian Prime Minister, Manmohan Singh, was scheduled to visit the day after our arrival.

Family atmosphere where we are all equal

Achala Joshi - Orphanage DirectorThe institution started life in the 1930s as a refuge for Hindu women and children in the years of upheaval that preceded Indian independence.

“Back then the only choice for destitute girls and women was to convert to Christianity in order to receive charity from a Catholic institution,” says the orphanage's president, Achala Joshi, a glamorous sixty-something who inherited the post from her mother.

“Shraddhanand was a response to this, but also a new model of ashram.” The Sanskrit term then denoted a center for spiritual instruction, but now refers to any place of teaching.

“The idea was to create a family atmosphere in which all are equal,” Joshi continues. “So we sit together for meals and we celebrate big Hindu festivals, such as Diwali, as any family would. We also encourage the teenagers to become big sisters to younger girls.”

The centre administrator, Sumitra Paradkar, a studious woman in her late thirties, works a daily volunteer shift here before rushing across the city to her paid job as a lecturer in economics. “There’s an almost magical sense of togetherness at Shraddhanand,” she says, when I wonder at her commitment.

“The girls plait each other’s hair in the morning; they help each other with their homework; a couple of the teenagers have even adopted as younger siblings the children in our center for the disabled, and use their free time to care for them.”

The orphanage also stands out for its efforts to prepare its wards for a changing India.

“What use are such skills to young women in the cities of a booming 21st-century nation? Institutions have to be relevant. They have to give children the skills they need to be part of India’s success story.”

Shraddhanand makes the most of its location in the heart of Mumbai’s educational hub of Matunga by networking with local institutions such as the Institute of Chemical Technology and other leading colleges of science and engineering.

“We have an on-site nursery school that teaches until the age of six. But beyond this the girls leave the ashram for schooling,” says Paradkar. “We send them to the best school we can with their ambitions in mind; and we’ll bring in after-school tutors around exam time for any of the girls who are struggling with core academic subjects. We even set up a temporary chemistry lab this year.”

The lab was a big hit with Pooja. I’m touring Shraddhanand’s four floors of dorms and common rooms, and its pleasant tree-shaded courtyard, with a retinue of 20 giggling girls in my wake. “I want to become India’s first female astronaut and discover a new planet,” Pooja explains, in excellent English. “So I study hard at sciences and math.”

Pooja’s ambitions were kindled when she came to Shraddhanand as a seven-year-old and experienced her first taste of formal schooling. She’d arrived via a children’s welfare NGO, which found her scratching a living collecting rubbish on the streets of south Mumbai.

Beside her is 14-year-old Geeta, who ran away from an abusive home, aged eight. “I like everything about school,” Geeta agrees. “My favorite subject is math. My dream is to become a math teacher.”

From the head of the gaggle, Paradkar explains, “If our girls want to take the academic route, we do all we can to support them. It can be an uphill struggle, as it’s rare the girls have experienced any formal education when they join us. Even if they’ve been lucky enough to live with family members in their earlier years, it’s unlikely they’ll have been to school; the education of girls is low on the priorities list for impoverished Indians.”

Shraddhanand’s educational success stories include Meenakshi, a 22-year-old who’s currently taking a postgraduate degree in business administration having begun her formal education at the age of nine. “It’s a huge achievement,” says Paradkar, “we’re all very proud of her.”

This 18-year-old girl has lived at the orphanage for 10 years - she is now training to be a nurse.In girls not suited to academic studies, Shraddhanand looks to foster jeevan shikshan, a term that loosely translates as 'vocational skill’. “We look for their knack and educate them in, say, hairdressing, nursing or computer science,” says Paradkar. “We have a number of girls pursuing nursing at the moment. They have a really promising future.”

When the girls reach the age of 18 to 20, many transfer to a residential home for working women that’s twinned to Shraddhanand. There’s also the option of moving into a wing of the main ashram reserved for women. Some girls, however, will opt for a different route. “You have to remember that India is still a traditional country,” says Paradkar, as we conclude our tour. “So some of the girls will aspire to follow the arranged-marriage route.”

For these 30 per cent or so of marriage-minded girls, Shraddhanand operates as any doting Indian mother would. “We receive hundreds of resumés every year from young men who are looking for a wife,” says Paradkar, explaining that orphanage girls are sought after in a country with such a shortage of young women.

“Usually they’re professional boys in their late twenties to thirties. Once a month we’ll take out the files here in the office and look through to see if any of the young men are suitable. If we find a good boy, we’ll carefully research his family background and income before we propose him to one of our girls.”

That said, Joshi dissuades her charges from marrying young. “We don’t like our girls to marry early,” she tells me, registering my jolt of surprise at Shraddhanand’s sideline matchmaking service. “At 20, they may think they’re grown up, but they’re still girls, and we tell them so. And what’s the rush?”

Still, Shraddhanand sees about 20 weddings a year. The ashram takes a stand against the illegal, but still prevalent, Indian dowry tradition, which was originally a form of insurance for the bride-to-be in case of divorce, but can now see the groom’s family demanding lump sums or cars. Instead, Paradkar tells me, they fit out newlyweds with gifts for setting up home: “Mixies [food processors], blankets, pressure cookers – all the essentials.”

And wherever a girl’s headed when she leaves Shraddhanand, the orphanage will always be home. Former residents regularly return for two-week holidays, or join picnic trips to the Indian hill stations. Married orphanage girls will return during the later weeks of their pregnancy and for childbirth, as many Indian girls return to their parental home.

International Women’s Day is another highlight. “We play games,” says Paradkar, “and we write and perform plays and stories about how it feels to be an Indian woman. We want to make the girls feel confident about their womanhood.”

There’s certainly no shortage of confidence emanating from my self-appointed guide. Pooja has changed into a neon sweater with rolled-up sleeves that owes something to a 1980s all-girl hip-hop band. “Miss, miss, come, come, Padmamalini has another song to sing for you!”

I return to the dormitory concert hall. It’s been transformed into a squidgy amphitheater, thanks to the padded mattresses the girls have tugged down from their overhead storage. Her eyes alight, Padmamalini launches into a plaintive number from a recent film. It features the typical Indian love-song trope of a girl pining for a forbidden love.

As her voice swells to the heart-rending falsetto that’s Bollywood shorthand for female heartache, I consider the 20 or so eager young faces around me. Whatever heartaches they might face in later life, these girls are the lucky ones.