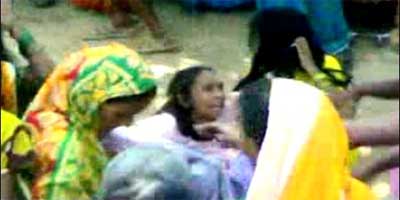 Four women have been brutally killed in a span of just over a month in Jharkhand due to the practise of witchcraft in remote areas.

On March 10, throats of Sushil Oraon and Jhibi Oraon were slit in Lohardaga's Lawagai village, while on April 16 the head of Budhva Mahali was severed and his wife Etwari Mahali suffered a macabre death at Haslata village in Gumla district.

The police said the killings were the result of witchcraft being practised widely in the remote villages of Jharkhand.

The police's contention was corroborated by a recent survey which found that 1,157 murders, committed between 1991 and 2010, were due to the evil practice.

Since 2001, there exists a law in the state "Jharkhand Dayan Pratha (witchcraft) Act" to control the crime, but it has been proved more effete than effective.

According to an official report of the Jharkhand Social Welfare Ministry, mostly widows, single women and families with no male members fall victims to these arcane beliefs.

The ministry pointed out that the real motive behind the killings was usurpation of the helpless women's movable and immovable property.

Jharkhand Social Welfare Minister Bimla Pradhan said Rs 20 lakh was earmarked this fiscal to organize workshops, publicity campaigns through the Jharkhand Information and Public Relations Department in an effort to weed out witchcraft.

"This superstition has led to atrocities against women. The need of the hour is to launch a widespread awareness campaign to root out the evil belief," Pradhan said.

Hardly a month passes without a witchcraft murder happening in Jharkhand, particularly in the districts like Chatra, Latehar, West Singhbhum and Gumla.

"It's because of lack of awareness (that such incidents happen). An awareness campaign will be launched to eradicate this superstition," Gumla Superintendent of Police Jatin Narwal said.

If necessary, action would be taken against those spreading the superstition, he said.

The Dehradun-based Rural Litigation & Entitlement Kendra (RLEK), an NGO engaged in rooting out witchcraft across the country, has recently approached the Supreme Court pleading for a direction to all states to have strict acts in place to deal with witchcraft-related crime.

"The SC observed that when women were getting fifty per cent reservation in legislatures, there should be strict laws to prevent atrocities on women," RLEK chairman Avdhash Kaushal said.

Unfortunately, witch-murders take place practically every week, which is nothing but a murder for property under the excuse of witchcraft, he says.

Kaushal suggested that the laws be made more stringent by increasing the present three-month prison term for such murders.

In 2009, UK BBC News broadcast a film of 5 women who were branded as witches..

The footage showsfive women being paraded naked, beaten and forced to eat human excrement by villagers after being branded as witches in India's Jharkhand state.

At the time local police said the victims were Muslim widows who had been labelled as witches by a local cleric.